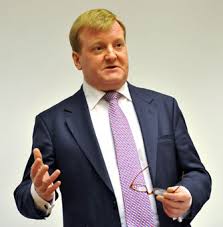 The premature sudden death of Charles Kennedy last week exposed the hypocrisy of many of his colleagues. Some of the most effusive remarks came from the mouths of those ‘colleagues' who were determined to remove him as leader of his party several years ago.

By all accounts Charles Kennedy was a well respected politician who was treated very shabbily by some of his colleagues.  Although I’ve always thought the LibDem Lembit Öpik was rather foolish, his article in yesterday’s Mail on Sunday has more than a ring of truth about it.

'Not the Nine O'Clock News - Politicians' adroitly & perfectly summed up the situation:

Can only find a version with English soundtrack but Finnish subtitles.

He got it right about Iraq and a few other things. Also, having taken the Lib Dems forward he was right about the risks of entering the Coalition. Politics is the poorer for his loss.

It does Joe. Remember seeing that clip when it was broadcast. Many moons ago now.

Must agree Demetrius. There didn’t seem to be much ‘side’ to him which was unusual these days in the political world.