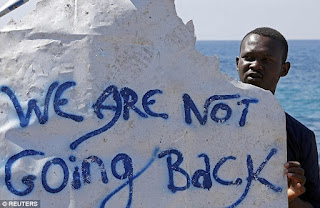 Last week HMS Bulwark was sent to the Mediterranean to rescue migrants from boats which had set sail from the African continent.  I use the words ‘set sail’ loosely as many of the photographs show that these vessels aren’t fit to sail around a pond, far less the open seas.

Now those rescued are protesting because they can’t gain entry to France at the Italian-French border.  The French have decided enough’s enough and closed the border and the migrants aren’t happy. The picture shows just how aware these migrants are of their rights.

In recent months several articles have stated these migrants are fleeing poverty or life threatening situations, but have a desire to reach Germany, Sweden or the UK.  Many have paid people traffickers up to £10,000 to reach the shores of Europe in the hope that the streets of these cities are paved with gold.  There must be gold in it somewhere for them because they keep coming.

It’s noticeable that most of the migrants are young, healthy men who will have left behind families in their own countries, therefore depriving their own country of a quickly diminishing male generation.

During a discussion with a German chap the other week about this migrant problem, he said it was a humanitarian one and the EU has to stand up to the plate and help these people.  I disagree.  What we’re doing is encouraging more and more people traffickers who now know they can herd numerous humans into anything that resembles a boat and point them north to Europe. They’re confident that as soon as the vessels leave the African continent then their clients will be rescued by Europeans and taken to the nearest European country, usually Italy.

If these migrants can afford to pay people traffickers, why can’t they afford to apply for entry via the official channels, instead of discarding their passports and pleading asylum?

We’re a tolerant society but the migration issue is now uncontrollable, yet our political masters ignore it.

Almost one in three of England’s primary school children is from an ethnic minority and one in five speaks English as a second language.  When does the quest for diversity become stupidity?  It’s impossible for so many people to integrate successfully into live in the UK in a short space of time.

The Calais problem continues and I thank my lucky stars that I wasn’t on that coach. Where were the French police? The answer is nowhere, because France doesn’t want these people and are content to allow them to destroy transport businesses and put the average traveller in fear of their lives.

We need to deploy our army at our borders to show that criminal behaviour will not be tolerated.  We also need to introduce the Australian system which has discouraged migrants from attempting to enter that country by sea.

Lastly, but by no means least, when these migrants enter Britain illegally they must be held in a secure area until they’re sent back to their country of origin.  Currently most are allowed bail if they’re charged with illegal entry. I’m informed that is the most difficult aspect of deportation because many lie and say they’re from war torn zones and checking their statements is an arduous, and sometimes unproductive, task.

The lefties won’t like this suggestion. Then again they give little thought to the countries which are losing a generation of young men.

Unfortunately I believe the EU is run by "lefty handwringers" who run on ideology and emotions. If anyone with common sense was running this then the first thing would be to establish genuine from non genuine refugees. My guess is that genuine ones don't pay £10,000 and just want safety from persecution.

1. Prove you are genuine (I believe that fits in with Napoleonic Law).
2. Move to a country in the EU which has lower immigration, such as Estonia, Croatia, Slovenia and Slovakia with help from EU assistance from the international aid budget to help that country improve. Surely better than the disease ridden war torn strife you are fleeing from eh.
3. No passport until you are a proven benefit to the EU.

I also wonder at our politicians, who have read all sorts at Oxbridge, maybe they should get Tristram Hunt to tell them about the Trojan horse.

If you check out the population figures of the great majority of African countries the scale of increase since 1951 means that the young men essentially are surplus. One effect is not so much diminishing their numbers as marginally slowing the rate of increase. This problem has been coming for some time and is now arriving in Europe.

I know how the Romans felt with the barbarians at the gates.

Some good points there David.

Do you mean they won’t be missed Demetrius, or do you mean their leaving is a cowardly act? Britain would look a very different place if our young men had upped sticks to other countries when conflict arose.

Is that tongue in cheek DoB?

Seems to me that HMS Bulwark, as an 'LPD' (Landing Platform Dock) is ideally placed to rescue, process and disembark them back on the African coast.

If the boats were destroyed and the travellers get sent back to where they started surely the flow will slow down. If instead they are rescued after just floating a mile or two offshore, transported to Italy and then given a free pass to Europe there will be twice as many next week. The BBC tells us that some are from China and Pakistan so how many want to come to Europe, 6.5 billion?

Australia solved the problem by taking them all back. Just let one in and it gives the others hope. Taking them back stops this hope.
But then Australia is an independent country and makes its own decisions, whilst we have to do what Brussels tells us.

Neither, they are surplus there being little or no work and very little future for them. Even such future that is there is a lot less attractive than what they see on the TV or film about other places. Also, if my experience in garrison towns is any guide a lot of young men like to go after loose women regardless of the consequences.

Yep, most of them are economic migrants. Even the ones fleeing violence are keen to enter Europe rather than anywhere else. Interesting to note that Syrian refugees picked up in the med had travelled through Turkey before getting onto the raft. Now you might think they would rather stay there; same religion and some cultural identity. No, they would rather carry on. But not content with Greece or Italy, they travel north to England or Scandinavia. I wonder why?
The only way to deal with the problem is zero tolerance. Every so called refugee should be returned,no exceptions. Most of the wr