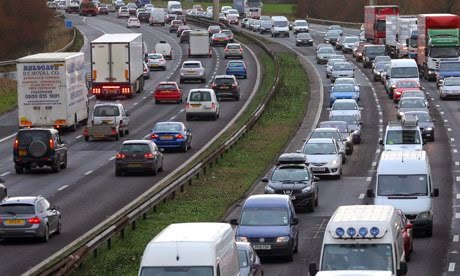 I had a wee sojourn to Englandshire this past weekend. The purpose of my trip was to hear the superb young tenor Jonathan Antoine sing. Unfortunately the concert was in Porthcawl, South Wales, though we managed to meet up with family enroute for a couple of hours.

My time was limited and it was decided the journey would have to be no longer than 48 hours.  Little did I realise, although I did some research on English motorway conditions, that we would be driving or stationary for 23 of these hours.

The trip to the border was a breeze, although there wasn’t enough to turn any of these white carbuncles which intrude upon our wonderful landscapes.  During the 500 miles journey I saw only 5 turbines moving. (The 5 is not a typing error).

However, this post is not about wind farms, but about the state of one of the main arteries between Scotland and England.

No sooner had we crossed the border at Gretna when we were held up for 95 minutes.  No explanation appeared on these overhead gantries. It was a local radio announcement that gave us minimal information.

Once we passed the accident (a car had hit the central reservation barrier but there was no ambulance present so it didn’t appear as if there were any serious injuries involved), we thought ‘full steam ahead now’.  I realise it’s fatal to think positively on England’s motorways. Ten miles further on saw us grinding to another halt.  The problem this time was roadworks.  From that northerly part of the M6 to Bristol on the M5, 40% of the journey involved roadworks; all of which had a speed limit of 40 or 50 mph.  A journey which should have taken around 8-9 hours turned into a nightmare taking nearly 14 hours.  Our average speed was around 35mph I calculated.

Here in Scotland another Forth road bridge is being built to ensure our traffic flows.  A solid infrastructure is essential to the prosperity of a country.  With the exception of the small section of toll motorway in the Midlands, the M6 and M5 have never been altered since their construction. With nose to tail traffic for hundreds of miles, is it any wonder the economy is in dire straights?  (I don’t believe Osborne’s predictions that it is improving).  Much of the traffic was commercial.

Of course the greenies want us all to sell our cars and use public transport, but I would have had to change trains four times to get to Porthcawl and then pay taxi fares to reach my destination and the cost was much more than travelling by car.  That was on paper.  In reality our fuel costs nearly doubled because of the miles of nose to tail stop/start conditions.

When crossing the border on the return journey I was never more delighted to see the sign ‘Scotland’ and breathed a big sigh of pleasure.  Should I ever have to travel to the south/south west again I will fly, but right at this moment I’d be quite happy never to return further south than Penrith.

Why do people in England tolerate such poor roads?  It would seem the greenies, with their public transport policies, have won.  I’m sure those travelling on the buses I often saw alongside us, may have had different opinions.

The concert was wonderful by the way and worth the journey.  When this young man’s solos album is released in October, I think he will take the world by storm.  Quite probably this was the last time he would perform in a small, intimate concert hall and that’s why I was so determined to be there.  Vast arenas, in which the performers are the size of matchsticks, aren’t for me no matter how big the stage video screens.
Tweet
Posted by subrosa at 09:49

You are quite correct SR, the roads and conjestion are dreadful.
Back in the 70's I moved from Essex to Cheshire. At that time the journey reliably took 6 hours in a Morris 1000 and about 50 miles was motorway. Nowadays that same journey can be done almost all motorway and takes anywhere between 4 and 8 (or more) hours.
Mind you the last trip to North Scotland took all day+ because the A74 was closed from Sterling north and the diversion was all round the West coast route.

I feel I should proffer some degree of sympathy for the ordeal that you experienced driving through Englandshire, but it does seem to have been very much self-inflicted.
Is the young man not available on You-Tube?

However, you do touch upon ‘Transportation’, a topic guaranteed to bring the red mist down over the eyes of any Highlander.

Whilst Roads and Transport is a devolved issue in Scotland it would appear that those in Holyrood and the central belt forget that there is a land mass bigger than Belgium north of Perth.
No ‘M’ roads in the Highlands; no city bypasses; no trams; no shiny new bridges; instead the capitol of the Highlands is serviced by the two most notorious roads in the country, the killer A9 and the equally lethal A96.

As for aviation, there is a quaint old WWII airfield outside Inverness with such atrocious flight slots that one has to add an extra day on any normal journey.

So for many a Highlander a tractor or couple of sheep may constitute a rush hour; it would still be nice to travel on a road not built by General Wade in the 1720’s

The east side is just as bad. Had to drive to E Sussex last month, and spent 3 hours driving through Leicester (who goes to Leicester if they don't have to?) because of an accident at some roadworks on the A1. the M1 - roadworks from end to end. The M25 - jam packed as per. Don't even talk about the A21...the only road in history to have it's 2 small sections of double carriageway on the southernmost stretch blocked by bollards.
Whatever the criticisms of Scottish roads, and there are many, we will never have to deal with the problems our southern neighbours have. That's YOUR southern neighbours, by the way JRB, because I live down a single track road in Caithness, so Inverness is MY southern neighbour.

Glad you enjoyed the concert. That makes it all worthwhile.

Love the photo of 'normality' on our English motorways.

Regarding your & JRB's observations about traffic density, these two pages give the contrast between the total maojor-road traffic in one English county, and, the entire 'Highlands'

Interestingly, 'all HGVs' has declined 2.6% in Essex vs a rise of +34% in the Highlands. Maybe it's all those wind turbines & blades being delivered!!

BTW:- Is that traffic jam on the right side of the photo those fleeing south, to warmer weather ;-)

Its all a matter of pandering to the Greens and LibDems who oppose road building and the desire to have enough congestion so that the plebs say "Yes Please" when offered the HS2 railway.

My son usually travels by train on frequent visits to Edinburgh or Inverness from London. On environmental grounds, he does not use air for journeys within mainland Britain.

Coming up for a family holiday last week, he decided to hire a car. He took the East coast route, though most satnavs reckon the West coast route is faster though longer. He encountered all the delays which HV describes.

I think the police are too prone to close roads following an accident, sometimes for hours for 'accident investigation' which rarely yields anything but the obvious.

The M5 began life as two-lanes and was widened to three. Didn't the Preston Bypass start as two-lanes?

I dread the M5/M6 junction. Air travel used to be a lot better, one could even buy a ticket on the Edinburgh-Heathrow shuttle! Now we are all 'suspects' so we spend longer on the ground than in the air. Can't be long before it will be quicker to go back to post horses!

Sorry I missed responding to all your comments. They’ve only just arrived in my email box.

JRB there’s nothing like a live show where this lad give it his all. Was worth it, albeit self-inflicted. :D

JimS, Yes I think it was only 2 lanes, you’re right. But it hasn’t been widened for many years has it.