A Brief History of the Pound 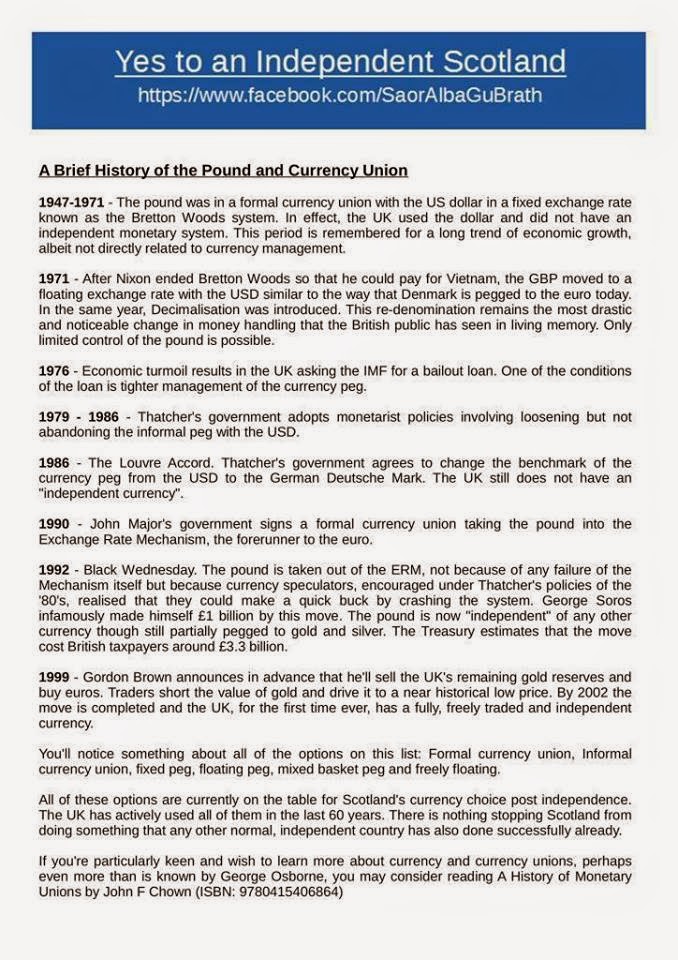 Found on Facebook the other day, I thought this may interest some of you.  Haven’t checked the historical facts avidly, but from my limited knowledge, they seem fairly accurate.  Click image to enlarge as usual.

Editor’s note to JRB :  Could you please email me as I have some, hopefully pleasing, news for you.  Email address over there > >  Thanks.
Tweet
Posted by subrosa at 12:00

Where does this leave an independent Scotland that isn't in a currency union with RUK? Presumably the idea would be to maintain parity between a new Scottish pound and the pound sterling, a so-called pegged rate.

But that is just a wish, what happens if the market doesn't want to play? Scotland's treasury is forced into buying or selling its own pound at the whim of the market. As the Facebook page says, the UK has been here before and it isn't nice. If the currency speculators can swamp the pound sterling they can surely take down Salmond's Shilling.

Thanks for that explanation, JimS.

Finance was never my strong point - I simply endeavoured to avoid the minus-sign appearing in my bank statements.

On the 1st of May 1707 the United Kingdom of Great Britain was created by the Treaty of Union which was the political union of England (including Wales) and Scotland.
This Treaty was legally enabled by the simultaneous implementation of two identical Acts of Union, one in England and one in Scotland.

One of the major provisions of the Acts of Union was to create and introduce a common currency for the new United Kingdom of Great Britain and a customs and monetary union, this was laid out in Article 16.

… so much for the history

If Scotland now votes for independence then the Treaty of Union and the Acts of Union which created it will fall by default and cease to exist; they will be null and void. As will therefore be Article 16 – the pound will cease to exist.

… that is unless by mutual consent the countries that were signatories to the United Kingdom agree to continue with its use.

So for political leaders to say that they will continue to use the pound regardless or forbid others from using the pound – is pure nonsense.

Scotland can still use the pound after independence, it just means they won't have control over it.

It can be an interim measure as long as it works out for Scotland, with a gradual plan to introduce the Seeyoupal or better yet, the Dram as a new currency in the future.

Other countries are using American dollars as currency even though they have no control at all over that currency's international value. It can be done and is being done.

Oily Al should already know all this and should be presenting it in arguments.

The fact that he patently doesn't know and is not using this info makes him look, frankly, like an amateur.

If there is ever to be a real independent Scotland, you have to get this shady used-car salesman out of the way first.

"As the United Kingdom ceases to exist after independence – so does the pound cease to exist.

Erm, why does the referendum not involve people in England, Wales and NI then if they are so profoundly affected?

Just a couple of slight problems. "Successfully"? Having gone through all that period, this is not a word I would use. Staggering from one botch job to another maybe but not success. Also there is a longer history. We could be about to revert to a situation more akin to the 1820's and 1830's in global terms. This is not going to end well.