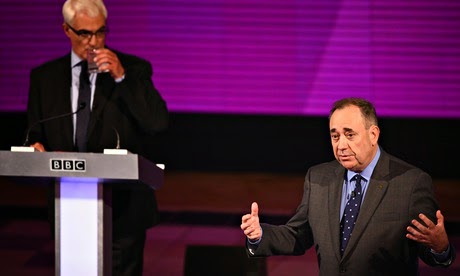 The winner of last night’s debate was Alex Salmond, without a shadow of doubt.

I was critical of his last television performance and was delighted to see the return of his excellent debating skills.  While Darling stuttered and stammered over his scripted answers (or non-answers in most cases), Salmond embraced each question with enthusiasm.

In true Salmond style he cornered Darling with his responses regarding the NHS, the currency, child poverty, oil and nuclear weapons on the Clyde.  Darling was hampered by the fact the No Campaign only has Project Fear.

I read somewhere a comment which stated ‘Best line of the night from Darling was “we do not need to divide these islands into separate states in order to assert our Scottish identity”’.  Let me return to my Scandinavian friends.  None calls themselves Scandinavian. Norwegian, Swedish, Finnish is their identity and that is how it should be.  In my 68 years I’m never called myself British and I will refuse to do so until my dying day.

Independence is not about Scottish identity - it never has been - it’s about self determination and choice.

Darling is tainted by his pro-WMD, pro-privatisation and association with the big parties at Westminster.  The greatest fear of the No Campaign is that should the vote be Yes, then a majority in England will start to campaign for an independent England.  I will support them.

I have determinedly or stoically avoided both debates. I believe that such encounters were set up deliberately by the media to be hostile confrontations from the outset and most certainly not balanced, factual, informative or sensible debate – where would be the ‘entertainment value' be in that?

Independence is the foundation for our future; it is something we can build upon as a nation; Oh, there is much of the politics on which I disagree profoundly – the EU for one, but that we can address and discuss at a later date.

Why am I voting ‘YES’ you may ask; this is an example of the many reasons why –
Over recent years there have been several occasions when I, an old curmudgeon from the Highlands, have had the opportunity to attend Holyrood and address MSPs from all parties on matters close to me heart.
My thoughts, opinions and suggestions were listened to, given due consideration and I would like to think that some may have contributed towards change.

Such an open and listening attitude from our parliament bodes well for the future.

Seeking and listening to the opinions of the common man would never happen at Westminster.

If Scotland votes yes, which it will not, then England will have won it's independence. The despotic dominance of the left aided and abetted by most Scottish MPs will be over and once again England will be the land of the free. Wales and Scotland can have their socialist Utopia and England can get on with the business of creating wealth, jobs and prosperity for it's citizens.

I accept my identity by geography.

But I've never described myself as British, although technically I come from the British isles and therefore am.

Even on internet forms where there is no Scottish option, I become French or Icelandic and, on one occasion, a resident of the Vatican City State!

If the No campaign is Project Fear then the Yes campaign is Project Hate.
Elaine C. Smith on BBC Radio 4's Any Questions [16:50] quotes Michael Portillo, "the union has infantilised the Scots", but chooses to misunderstand. The union has allowed some Scots to live their socialist dream, "to each according to their need". For an infant the need never ends. Post union there will be no 'adult' to provide for the 'child', indeed the children will be given the keys to the sweetie shop but no-one will be there to buy new supplies.
The 'adults' in Scotland will move south. We can see the same happening in Quebec where the socialist dream of separation just encourages the best to move to Ontario. Look across to Ireland and the same is happening there, the ones with 'get-up-and-go' get up and go.
Sure things could be better but the hard core of the independence movement is founded on visceral hatred of the English and the 'wicked Tories'. Where does that hatred get Scotland? Look to the Welsh Valleys, look to Liverpool. The 'child' attitude there is endemic. The Scots have a balanced diet, a chip on each shoulder. The hatemongers will never deliver because they feed on hate. If it isn't the English that are to blame post-union it will be the EU.
As for 'WMD' that is a joke, the UK Strategic Systems programme has put billions in Scots pockets but has not (and won't) kill anyone. In the history of warfare nuclear weapons have killed vastly fewer people than the humble .303 round produced in Ayrshire. This is just as stupid 'principled' stand as Salmond's 'Green Economy' paid for with Oil!
Of course the No campaign is a campaign of fear, because post-union England WILL NOT be a 'friend,' as Salmond says, it will be a Scottish competitor that will win hands-down when it comes to finance and links with the rest of the world.

Last evening much was made of " The sovereign will of the Scottish people" , and yes if you vote for independence that should be recognised .
However be prepared for the sovereign
will of the English people ; Hadrian's Wall can soon be re-built .

Thank you JRB, worthy of a stand alone post I think. :D

Antisthenes, that’s a bitty harsh. Believe me England is not the utopia you think. All countries have difficulties - including England.

Ha ha Tris. I’ve never gone as far as being part of the religious square mile even though I’ve walked it. :D

Thanks for that Jim. First I’ve heard of it. Rather pompous of Portillo to suggest that all Scots have a hatred of the English. Hate is such an emotive word isn’t it and such a wasted emotion.

The doctor, is that a threat or a promise? :)

I should think similar comments were made over 300 years ago to us.

"Independence is not about Scottish identity - it never has been - it’s about self determination and choice."

I think it's a case of heads you lose and tails you lose. What 'choice' are you expecting S/R? I'm expecting less choice with a 'Yes' vote because the SNP is riding roughshod over the Scottish people - on top of the hassles imposed from Westminster.

Down here in Galloway, we say no more wind farms. The Council doesn't give planning permission and is overruled by Edinburgh. I expect it's the same all over Scotland.

The same-sex 'marriage' consultation produced the response where nearly two-thirds rejected the idea, but it's going ahead anyway as it had already been decided before the 'consultation'.

We'll have less choice because we'll have alternate socialist SNP and socialist Labour governments (of course the Tories are socialists as well nowadays anyway).

We'll be ruled more from Brussels and Geneva than from Edinburgh. Many if not most of our top companies are owned by foreign or rUK conglomerates.

Half of our land is owned by 500 people, many of them non-Scots. Even the UN have started land grabs with their first 'biosphere' here, occupying one fifteenth of Scotland's area.

The SNP is so right-on (like Labour) that we'll be signed up to all the international PC and Green legislation going, further reducing our choices, both in terms of freedoms and prosperity.

Despite the potential to be the richest country on earth for the size of the population, we have so many of the wrong people in positions of influence that our 'independence' would be doomed from the start. We would be a backwater of the EU and bled dry by them because we have 90% of the EU's oil (according to Nicola Sturgeon).

Ordinary people have no voice left in the UK and that would continue in Scotland and rUK. The governments and every institution is now rotten to the core with socialism and unless that can be changed - almost an impossibility - we have no choice but to comply. Some brave people choose not to comply and end up in court and even jail for not being PC or for allowing smoking in their pub or some other new heinous 'crime'.

As for Scottish identity, Salmond wants half the world to live here. There will be no such thing as Scottish identity. We'll be a disconnected, dysfunctional collection of communities easily controlled by government/EU/UN.

Sorry to burst your bubble and I know you don't like the EU either, but this isn't independence that is on offer. It's a mirage; a vanity project to say we're "free from England at last" except that we won't be because with ten times our population they'll have much more influence in the EU and a place on the UN Security Council (maybe) which means they'll still have power over us.

subrosa: Portillo didn't say the Scots hated the English, he said that the union had infantilised them, i.e. they don't think for themselves and always expect to receive from the 'parent'.
Elaine C. Smith chooses to believe that this is true but that independence will allow the Scots to 'grow up' and become adult.
It is MY assertion that a large part of the Yes campaign is driven by hatred of the English and hatred gets no-one anywhere.
It is also my assertion that the idea of independence is childish, the child wants the keys to the sweetie shop, the sun will shine everyday, there will be no debts and everyone likes Scots so everyone will be friends!
Get real!
To the rest of the world Scotland will be seen as a cold, remote, despoiled country, populated by a sullen people, fed on a diet of resentment by Labour/SNP. That is why the plan is to stay in the EU, so that the begging bowl can be taken direct to Brussels without 'mummy and daddy' getting in the way.

Good stuff. So have you decided which way you'll be voting then..?