Was There A Winner? 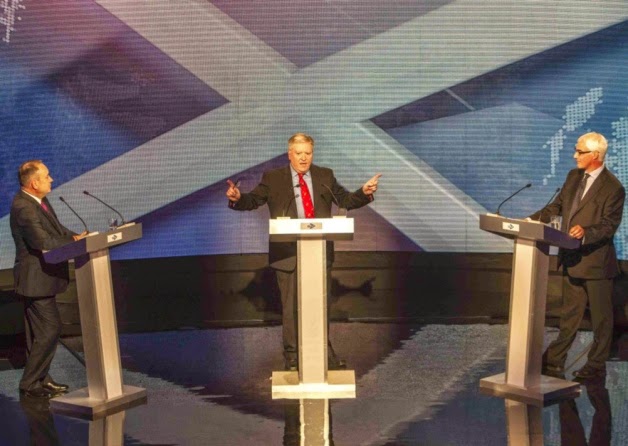 I have yet to watch the whole STV broadcast of the debate between Alex Salmond and Alistair Darling, but what little I did see I found disappointing.

The other day I read Alex Salmond had ‘been taking lessons in delivery technique’ and I expect the leader of the Better Together campaign received similar tuition.  But the question is was it worthwhile?

Alistair Darling appeared to be his usual self -  just managing to stay slightly above the ‘boring’ threshold.  (The part of the programme I did see last night was when the currency for an independent Scotland was discussed.)

What was wrong with Alex Salmond?  I’ve heard him speak several times over the years and was always left feeling reinvigorated in my desire for  Scotland’s independence but last night Mr Salmond seemed to be sedated.  Where was his passion?  Where was his conviction? Surely he knew that Darling would push the ‘Plan B’ issue.  I was prepared for a feisty response, but was left feeling disappointed.

The currency issue matters a great deal to many of my friends.  It’s their main reason for swithering and I was hoping they would be more assured once Alex Salmond explained his policy last night.  Hope wasn’t enough.  I felt deflated.  His responses were adequate but lacked the usual Salmond persuasiveness.

It’s probably quite unfair of me to judge the debate on a 20 minute section, but currency is one of the most crucial elements of any country’s ability to stand alone.

There have been rumours over the years that Alex Salmond suffers badly from back problems.  Yesterday could just have been ‘one of those days’.  Unfortunately, the public are fickle and make no allowances for bad days.

Then again, it crossed my mind he was over-rehearsed.  That can lead to a flat delivery.

What did you make of it?  Apologies to those of you outside Scotland who were unable to view it. For ITV to assume there would be no interest outwith Scotland is arrogant - to say the least.

Here is Craig Murray’s assessment of the programme.  Once I’ve watched all of it I’ll probably more or less agree with him.

and still I remain - undecided.

How anyone can vote Yes after watching Salmond's stuttering, sweating, evasive answer to the currency question is beyond me.

Salmond looked weak because he had someone other than an MSP challenging him. Darling has experience, intellect and is calm under pressure. He was never going to be swatted aside, or made to look a fool, by Alex Salmond.

I’ve yet to watch it all JRB!

Auch don’t be silly William. Salmond, on form, is as good as - if not better - than any MP or MSP. He wasn’t at his best and I’ve given my thoughts about it in the post.

Subrosa – I’ve just had a dreadful thought - I do hope you realise that my post was solely in answer to your question - What did you make of it? [the TVdebate] - and reflect my thoughts on that and only that.

When you're 2-0 down from the first leg, you need a decisive victory in the second one. A draw's no good, or even a win by the odd goal. Ergo if Salmond didn't win decisively, he lost. Simple.

Could it be that Salmond was adjusting his style to the medium? Speakers who are stirring in a hall can seem hammy, OTT, on the tube; they say this of Kinnock.

Not having had telly for nearly a decade, I couldn't watch it and am not even legally allowed to watch it online, but I've started watching now on 'STV Player'.

The first interesting feature was the Muslim woman. I'm glad she didn't have on a full-face niqab, because - what a cutie.

Anyway, just seen the opening statements and I give the round to Salmond (I *intended* to vote 'No' all along).

Darling's howler was his statement that this referendum is not about patriotism or anything else, but the future of our children and grandchildren - the future he helped ruin in his time in the 'New Labour' governments.

What a steaming hypocrite!

And I thought I couldn't trust Salmond as far as I could throw him...

There’s a message for you on this morning’s post asking you to email me please.

I’ve now watched all of it with a No voter Sobers and I still consider Salmond was too restrained.

However, the No voter thought the whole programme was very biased towards the Yes campaign.

Cannae win can we lol.

Sackerson, Alex Salmond has had plenty experience in front of TV cameras - more than most and he usually performs very well. Hence my suggestions.

Oh Stewart! Apart from your admiration of the woman in the audience, are you now swithering? Say Yes, it’s easy. :)

You can get an inkling as to my intention from my blog post on the debate.

I pinched your photo, but I did mention you.