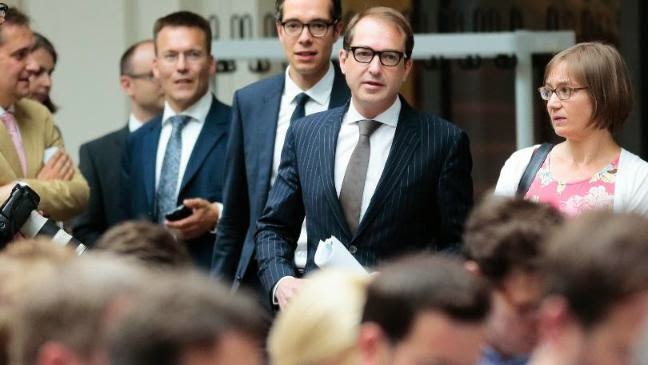 For many years I’ve been aware the UK was the only country in the EU which didn’t tax foreign heavy goods vehicles.

However, that has been finally amended and without any blaring trumpets, the legislation came into being on 31 March of this year. The charges in this country depend upon vehicle type, weight and the number of axles and range from £1.70 to £10 a day with a yearly cap of £1000.

Germany has a truck toll which charges per kilometre rather than the day. Obviously more money to be made for their coffers using this system.

Now the Germans want to go one better.  They are proposing a car toll in an attempt to make money from millions of foreigners. The excuse is that ‘it wasn’t fair that foreign drivers do not contribute to maintaining the roads’.

Alexander Dobrindt (above second from the right) plans to introduce toll stickers in 2016 for all cars using any roads in Germany, not just autobahns.  Foreign drivers will be able to get a one year, two month or 10 day sticker online or at filling stations and the cheapest option - the 10 day sticker - will cost €10 (£7.95). The plan is to adjust the car taxes of German drivers so as they will not pay more overall.

Dobrindt suggests the proceeds could produce €2.5 billion euros and he has little doubt that it will be compatible with EU law.

Considering the number of years the UK government has hummed and hawed about a foreign heavy goods vehicle tax not being in line with EU law - when l other EU countries had introduced it years ago - how long will it take Westminster to catch up?
Tweet
Posted by subrosa at 09:20

I thought that as we're all in the EU, we could all move freely? ;-)

The proposal is simply another 'unproductive'-job-creation scheme, that taxes motorists. Herr Dobrindt ought to be reminded how much money visitors spend in his country, before he tries to discourage them. Let's not forget the likes of Ryanair & EasyJet generate substantial income by exporting our spenders to regional continental airports.

Or, in the event of a 'Yes' vote, maybe Salmond could adopt the policy to discourage us sasunnochs from invading Scotland's tourist attractions?

Oh Subrosa! Why? Oh why? did you publish this article? :) 

Soon we will all be micro-chipped and roadside sensors or spies in the sky will track and record our every movement.

All this will be followed by HM Government siphoning money from our bank accounts – with or without the courtesy of that ubiquitous brown manila envelope.

Standards of spelling and grammar are falling in the comments here.
It's sassenachs Joe and us poor motorists JRB.
On-topic, the sensible approach to this issue has to be universal road pricing, with differential rates according to quality of road and congestion. From a few pence per mile in the Highlands up to a few pounds per mile in city centres. Sure, the system will have to use GPS technology, but it does not require a central data-base. On-board meters are all that's needed.

Those who live in glass houses eh?

Fair enough up to a point Joe, but it isn't the early 18th century. And what's the last word in your link?

I admit to trying to be a smart-@rse. And found the Gaelic version by searching for the correct spelling!

That is true Joe but nobody sticks completely with the rules - except the UK of course. :D

Actually JRB, it was a little dig at the Westminster government because they’ve only recently legislated for foreign heavy goods vehicles to pay a small levy. Most other EU countries have been doing that for years.

It would be a nice little money spinner for Osborne no?

Your doggie’s looking on form. :D

Oh dear Hamish, apologies for our poor grammar, but it’s been very warm today and I’m sure the heat was a great contributor to our failings.

I concur with a score draw gentlemen. :D

And, of course, every penny raised by this new tax will be spent wisely and fairly for the benefit of the people.

Isn't Westminster catching up rather a pipe dream?

Mind you, I'm surprised Gordon never thought of it!