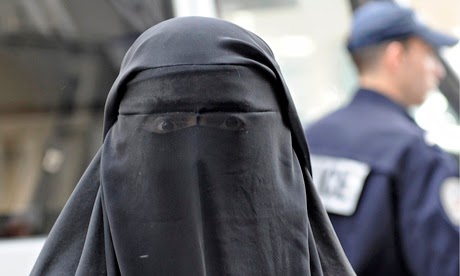 At long last a Muslim speaks out.  I agree with him, do you?

I’ve also found an interview Taj Hargay had with David Frost three years ago.  He was of a similar opinion then although the article writer alleges he was not an imam.  Does that matter?

It’s quite concerning how the radical feminist lobbies are progressing in the UK.  Back in the 60s I supported the calls for equality between the sexes but I had no idea then that, a few decades later, men would become so invisible in society.

We are government mainly by men, but women now dominate society. Earlier today I read that 47% of babies today are born out of wedlock.  There is a noticeable absence of fathers in many children’s lives.

I digress.  Recently the European Court of Human Rights upheld France’s burqa ban, accepting Paris’s argument that it encouraged citizens to ‘live together’.  The case was brought by an unnamed 24 year old French citizen of Pakistani origin, who wears both the burqa, covering her entire head and body, and the niqab, leaving only her eyes uncovered.

She was represented by solicitors from Birmingham.  Why? Are there no human rights lawyers in France?

Belgium introduced a similar ban in 2011.

What are we afraid of? Ban the burqa. It’s everyone’s right to interact with someone by looking them in the face and any legislation should also include the necessity for the removal of face coverings, scarves, veils, turbans, helmets etc for security checks.

It's everyone's right - including people of other races, whether you like it or not - to wear what they please.

Think about what you are saying: you are suggesting the use of state violence to force people from other cultures to adopt the dress habits of your culture. And for what? So you can "interact with [them] by looking them in the face"?

When was the last time you interacted with a devout Muslim woman and had the experience spoiled by her wearing a veil? I suggest this has never happened to you.

I don't think it should be banned, we should always be leery of allowing the state such powers. What we ought to do is allow people to refuse entry to those wearing it in shops, businesses, schools, government buildings etc. In other words make the wearing of one virtually impossible in society.

"When was the last time you interacted with a devout Muslim woman and had the experience spoiled by her wearing a veil? I suggest this has never happened to you."

The point is that people don't/won't 'interact' with people with face coverings; within the host culture this is the garb of the criminal.

There is a world of difference between people 'wearing what they like' - it is a joy to see youngsters experimenting - and wearing a uniform that deliberately sets you apart.

I spend part of my time in a 'tourist trap' and part in a major city. Tourists from all over the world somehow manage to look 'western', with a few exceptions. The same 'exceptions' that now dominate whole districts of the big city. They are the much vaunted 'cohesive community'; they don't talk English; they don't write in English; they dress as if in Pakistan, even in mid-winter. It's called colonisation. They are right and we are wrong and they will use our freedoms against us until Sharia makes freedom obsolete.

"The point is that people don't/won't 'interact' with people with face coverings; within the host culture this is the garb of the criminal."

The reason you don't/won't interact with Muslims is, I think, plain for all to see.

I would agree with Quiet_Man that I'm not sure if the Government should introduce an outright ban.

However, private businesses should be permitted to decide if they wish to refuse access to people with face coverings. If more and more refuse - as I think they will - then it will become a matter of personal choice for that individual if they insist on face coverings (given there is no legitimate religious reason).

I'm very happy for women to wear the burqua - as long as they sod off back home to do it!

"When was the last time you interacted with a devout Muslim woman and had the experience spoiled by her wearing a veil?"

Is a devout Muslim woman allowed, alone, to interact with a male stranger?

Apologists seem to forget the 'When in Rome' saying.

Oh, and if you're female, try walking down the street without your head covered in a devout Muslim country. There, they have the mutaween (Religious Police ) to arrest you.

I once visited Casablanca as part of a Scottish Dance group. In the group there was a very attractive young Highland Dancer.

In defiance of advice from the other women, she insisted on heading out for our visit to the Suk in a skimpy top and mini-skirt. The reaction from the Moroccans was violently hostile. Voluble insults, spitting, almost casting around for stones to throw. The rest of us had to form a square around her as we moved through the bazaar.

A clear inconsistency of cultures; there was no such negative reaction to the kilt-wearing males.

Like earlier commenters, I don't want to see more legislation.
Courtesy, common sense, and consideration for local norms should suffice.

A few years ago, an acquaintance had to give evidence as a witness to a motor accident. When asked whether he had noticed anything special about the driver, he said something to the effect that the driver of unknown sex was wearing a black facial mask with a letter box shaped slot at eye level. It caused some consternation, but the Mag said it was an acceptable description.
The interesting thing, my friend said, was that no one suggested her vision was restricted by tunnel vision or questioned whether she should be driving whilst dressed in such a manner.

In my culture one helps people in trouble so it felt perfectly natural to help lift a young mother's pram stuck in the snow.
Somehow I felt the young mother was extremely embarrassed to be helped, but it was hard to be sure as she hid within her niqab.
Perhaps I should have been more 'culturally sensitive'? Perhaps it has become impossible to know what 'offends' our fellow creatures and even more what 'offends' our self-loathing compatriots as they look for the bad in others.

It's something I'm not comfortable with either, for reasons already expressed.

Think about it, Labour and all these other countries allowed in millions of Muslims in a very short time, knowing exactly what their customs are. We know they did it as an excuse for the governments to subvert our Western culture and now that this has been achieved, they're fair game to be cracked down on like everyone else.

Worst of all, this is yet another diversion away from our rotten governments in the West. They allowed them to come in, so live with it!

Are the politicians who want to ban the Muslim garb the same ones who recently voted for 'gay marriage'?

Are these the ones who go on 'Gay Pride' parades where people are dressed in public in the most disgusting outfits?

Are these the same MPs responsible for making our police officers dress all in black, like paramilitaries? All they need is a niqab to complete the look.

Crivvens Stewart, you managed to cram a fair few prejudices into that comment.

Prejudices? They used to be called 'opinions' before the social engineers conditioned you. Are you saying I'm not entitled to my opinions?

3/4 of the UK's population (incl. many immigrants) think there's too much immigration and I think it's fair to say that the majority is fed up with homosexuality being rammed down our throats.

I'm not prejudiced against burkha-wearers because Westerners often dress worse and like others have said, you can't start ordering people how to dress (unless, like in Majorca, it's no more bikinis allowed in the streets as they try to go up-market).

Or maybe you think everyone who appears at a 'Pride' parade is suitably dressed to meet your maiden aunt?

".....responsible for making our police officers dress all in black, like paramilitaries? "

Paramilitaries are hardly likely to be seen dead in this:- ;-)

I think we should be careful about allowing the government to decide what we wear. Fewer powers not more.

No matter which government. No matter whether it's the English one or the Scottish one, or the Icelandic one.

Imagine Theresa May being allowed to tell us what to wear and not to wear, or Michael Gove, or for that matter, Alex Salmond.

Additionally, to be fair, if people have a problem with face coverings for Muslim women, they would clearly also have problems with the use of balaclavas in the cold weather on teenagers, or veiled hats for women of a certain age trying to hide their wrinkles.

If driving while looking through a narrow space is a danger, surely so are these all-in-one crash helmets with visors.

We have to be careful when making rules that we don't give the authorities the power to take away any more of our rights.

Thanks, Joe. Nice they have the money to waste on top of buying the 'Gay Pride' flags and paying for coppers to take part in the parades.

The police are now the PC paramilitary wing of the government/EU.

"If driving while looking through a narrow space is a danger, surely so are these all-in-one crash helmets with visors."

The opening in a full-face helmet is considerably larger than that in the burqa photo above. Far wider peripheral vision is available, too.

The point however is somewhat academic, as the menfolk of burqa-wearing women forbid them to drive.