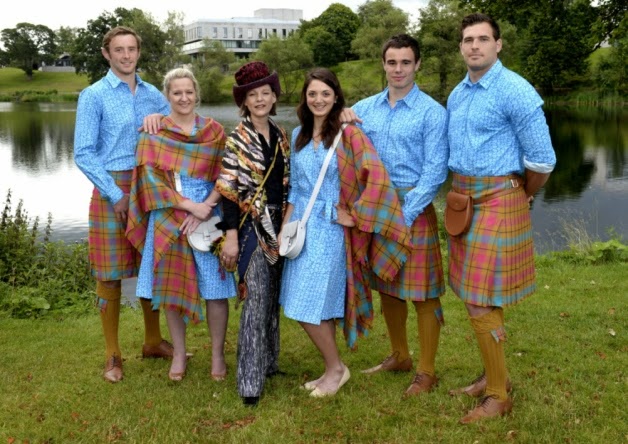 Team Scotland’s Commonwealth Games parade uniforms were unveiled the other day to a mixed reception.

Obviously no expense has been spared, as is usually the case when public money is involved, but there’s something wrong with these outfits. Is it the mustard socks? The lack of a belt or tie for the men?

The tartan is pleasant enough but it’s the blue that is wrong.  In the tartan the blue looks much more subdued instead of the chosen garish sky blue which obliterates the colours of the tartan.

The lassies’ frocks are a definite throw back to the 70s.  I remember wearing a similar wrap-round style then.

I’m presuming the bowler-hatted person in the photograph is the textile designer and artist Jill Blackwood who states the blue shirts and flowing wrap round dresses were inspired by the Saltire flag.

The athletes like their outfits of course - who would be crass enough to be negative about a freebie?

To confuse you even further, there will be another tartan on display at the games. That’s the one created by school pupil Aamir Meymood (see below).  It will be used at ceremonies such as the presentation of medals.  I can only hope Ms Blackwood isn’t involved is designing the outfits using Aamir’s tartan.

It’s big and bold.  We’ll have to wait to see if it’s used in the traditional Highland dress manner or used casually like Team Scotland’s outfits.  I’ll be viewing from the comfort of my settee and the thought of battling through crowds has no appeal.

“Made in Scotland – from curtains”

I'm all for using tartan and traditional styles, but I have to admit my first impression was that a midnight fire alarm in the team hotel had sent them rushing outside wearing hastily-donned plaid bedspreads over their pyjamas.

The textured blue shirts and dresses highlight the mismatch of colour in the kilt I think Macheath. No women wear plaids really except the smaller dress ones. As I said I rather like the tartan and a shift styled dress would have looked trendy.

I think you're right - there is a clash of fabrics compounding the problem here.

Incidentally, JRB's brilliant contribution suggests I'm not the only one to wonder whether the Irn Bru marketing department may have had something to so with the colour scheme ...

Instead of Team Scotland having to wear that hideous outfit

I expect the horrible blue shirts come from the colour of the St Andrew's Cross flag as designated by the Scottish Executive. They have to interfere with everything and rather than have a nice royal blue (or lighter) flag, we increasingly see more of Pantone 300 and 299 (which is incredibly offensive and the ones I get coming through as replacement stock).

It's the worst shade of blue I have ever seen. It's heading for turquoise. Is this to aid in Edinburgh's obsession with the Green religion? Will the flag gradually become green?

Or will the Christian theme be replaced with some hideous creation that reflects our different "communities"?

So green for Islam and our Irish heritage, red for socialism, some yellow stars to pay devotion to our masters in Brussels, pink for you-know-what and black for our future?

I’ll look into Lidl when I’m in Perth today JRB.

You’ve reminded me Stewart I need a new flag.

I only stock proper blue ones! Although some are a bit darker than I'd like.

I’ll have a proper one Stewart. Can’t remember the size so will have to measure it.

The woman in the middle is definitely rockin' it Pimp Style.
She looks like she's borrowed Huggybears outfit from 1975.