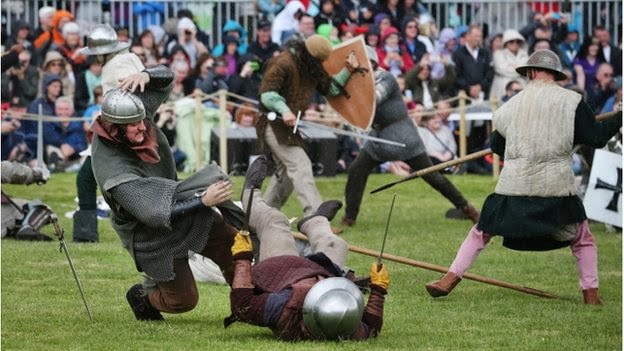 What we didn’t see

A group of friends and myself decided, last week, to treat ourselves to a day out at Bannockburn Live. One of the group knew people who were involved with the enactments and he said they would be top class.

We all booked our tickets online - at £22 a pop - and set off in jolly mood.  The journey took about an hour and we should have foreseen problems when we neared Stirling, but decided they were related to the Armed Forces Day being celebrated nearby.

As we’d booked too late for our tickets to be posted, we searched around for some form of kiosk for ticket collection. Nothing. Eventually we were instructed to join a very lengthy queue buying tickets.  It took one hour and 12 minutes to collect our tickets before we could enter the event. Some were ‘gasping’ for a coffee by then and queued for 15 minutes for the privilege.  I won’t mention the price.

To cut a long story short, we never saw any of the enactments.  We - again - queued for over two hours to enter the arena, when we noticed the cut-off point was way ahead of us. It was only by talking to others that we discovered a numbers for each event were restricted.

The poor weather contributed to our decision to cut and run. None of us fancied queuing longer in the hope we would see an enactment and one of the party was finding it hard going as she has limited ability walking.  She had enquired about seating prior to booking and was told there would be plenty seating all around. Untrue.

What a shambles it was. So many, like the eight of us, left feeling despondent and one couple had travelled from Dornoch just to support a friend who was part of an enactment group. They left in obvious disgust.

Today the event organiser ‘apologised if anyone was inconvenienced’.  How pathetic.

This could, and should, have been a splendid event particularly when £650,000 of taxpayers money was involved, but I should have done my homework more efficiently.  What I hadn’t realised was that VisitScotland and the private company Unique Events were the organisers. With years of client experience with VisitScotland I know they are poor at organising anything other than a wee shindig in one of their favourites hotels - such as Gleneagles. Anything more is beyond their capabilities.

Bannockburn Live certainly wasn’t lively for our group.  All that could be seen were queues and more queues.  What a waste of £176.  For a few pounds more we could have had an appetising afternoon tea in Cromlix House, Andy Murray’s hotel near Dunblane. There wouldn’t have been a queue in sight.

State of the Nation. Unlikely ever to improve, independence or not, I'm afraid. My thoughts for your justifiable disappointment.

After a gap of some 700years and a build-up of marketing hype, hyperbole and hysteria, the people should have had the ideal opportunity to experience an event that changed the history of Scotland.

However from all accounts all were sorely disappointed, surrounded only by chaos, confusion and a half-hearted attempt at an apology.

After a gap of some 300years and a build-up of marketing hype, hyperbole and hysteria, the people, come September, will have the ideal opportunity to vote in an event that will change the history of Scotland.

I wonder if once again we will be sorely disappointed, surrounded only by chaos, confusion and half-hearted apologies.

Down south, we use the expression "Couldn't organise a p1ss-up in a brewery."

Maybe the northern version, applicable to your experience is "Couldn't organise a p1ss-up in a distillery."

Having witnessed the ‘best’ we can offer for a public event, I tend to agree JRB.

The problem here in Scotland arises from the small cliche which dominates such aspects of public life. VisitScotland should have been done away with years ago. It’s not fit for purpose. It doesn’t serve it’s clients or Scotland.

Either would suit Joe. It was a total shambles.

That is a bad day out. As a re-enactor who took part in the 1314 stuff (although not the battle), I was disturbed to find how they were controlling entry on the Saturday afternoon. The first battle had massive queues to get onto the stands, so they changed it into controlling entry at the barriers.

That and other things make it clear that Unique events simply aren't as competent as they aught to be. The bins, site access (corrugated roadways are a good idea in case of massive rain) were fine, the staff I talked to were helpful enough, some of the tents were good. But there were numerous other issues, such as the queueing, the difficulty of collecting your tickets in the first place, the bar being way too small - some of the events i've been to have had bars twice the size of the Bannockburn one (well I heard there were 2 but I never saw the other one) for fewer visitors. Same with the food, and the farmers market was way too small to be any use to anyone, my local one is twice the size.

How much is down to budgetary constraints, how much to incompetence and inability to judge the time and visitor requirements is unclear; Visitscotland subcontracted most of all this to Unique events, so they definitely get some of the blame. Visitscotland is just a wee organisation with little knowledge of anything much, and I doubt they had much say in things. But I could be wrong, I am considering an FOI into the whole event to see where the money went and who was responsible for what.

Welcome to your future.

Good luck, you're going to need it.

We are going to have similar problems at Waterloo next year.

Do not blame us, the re-enactors, blame the bastartds from the local Belgian tourist board who have taken the event over, banned us from taking photos of OUR OWN camps, can not even garuntee that men and Wives will be based in the same camp, have restricted the number of troops to no more than 6,000(!) and want to charge each visitor some astronomical entrance fee, of which WE do not get to see a single cent!

[Aside to @Furor Teutonicus] … disappointed to read your thoughts on Waterloo, had seriously contemplated visiting the events of June 2015.

Had thought since Waterloo200.org seemed to be involved that things would be well organised.
It would have been wonderful to visit the battlefield, to see what Project Hougoumont had achieved in refurbishing the farm, to visit La Haye Sainte where the KGL fought so bravely or to stand where Capt Mercer once stood his battery at the ready.

But having read your piece I checked out prices for the event – OMG – as you say, extortionate – a substantial four figure sum – to rich for this OAP.

Thanks for the ‘heads up’.