A Couple Of Reasons To Vote YES 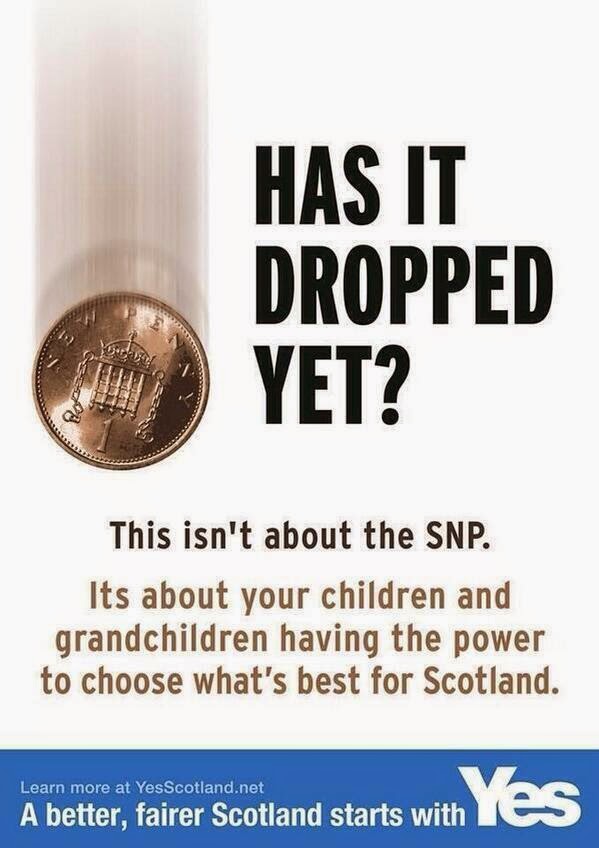 The penny dropped a long time ago. Heads we lose and tails we lose. We are controlled from Brussels and Geneva and elsewhere and that won't change however the vote goes.

A 'Yes' vote will probably be worse with an SNP police state and those 'children and grandchildren' questioned by their 'named person' and the 'authorities' about how their parents and grandparents are behaving and removed, if deemed necessary.

It's a shame the incompetent, dictatorial and treasonous SNP will take turn about with the equally awful Labour Party governing Scotland (as much as they're permitted by Brussels/Geneva/Westminster) because we really could be fabulously well off.

Sorry Rosie, but that supposed premise “Its (sic) about your children and grandchildren having the power to choose what’s best for Scotland” is a load of emotive political bollox.

It’s the about the selfishness of parents optimistically hoping the decision they take, will be advantageous to their offspring.

I admit to not having read the ‘prospectus’, but does it actually guarantee future generations the opportunity to re-join the Union? What if E/W/NI didn’t want the Scots back?

Here's a good reason to vote 'yes' : Gordon Brown says you should vote 'no'

More Yes guff. We already have the power to choose.

And what is best for Scotland? The SNP's undemocratic, socialist agenda? No thanks!

Oh aye, and you won't have the penny if we vote Yes!

Sorry Subrosa but such a poster should be disregarded as inaccurate emotional propaganda.

If the Yes campaign wishes to secure my vote, and that of any other ‘undecided’, then it is long past time that they laid before us the cold hard truths of what is independence – sans propaganda, sans hyperbole, sans spin, sans political ideology.

For very shortly it will be us, the voter, who will have the power to choose what’s best for Scotland, for come the day, we cannot just defer the choice to our children and grandchildren.

… and a personal quandary
I support independence but detest the EU.
If Scotland gains independence and what remains of Britain returns a Conservative government, which seems highly likely, then they will get an In/Out of EU referendum.
So the rest of Britain could vote to leave the detested EU and we poor souls in an independent Scotland will be forever joined at the hip to the EU.
So if I were to vote ‘No’ to independence then I might just get a chance to vote ‘Get Out’ of the EU.

There is also the vitally important question of which lot are the most likely to ruin the economy your children will inherit.
Currently Windy Al & the numpties are still all out for wind turbines / bird blenders, as that is critical to economic competence, then the children in the poster are going to be a lot poorer than otherwise.

I don’t think the SNP will be the next government necessarily Stewart.

What do you suggest? We stay with rUK and be better off?

Of course it is Joe, couldn’t agree more. But the emotional side is a good PR move.

That’s exactly what it is JRB but some may be swayed by it.

We have the same concerns and little substance is appearing. Time is moving on and the Yes campaign need to start talking about the serious issues and not relying on posters like this.

Stewart, you don't live in the same Scotland as me. In fact, I don't think your in the same dimension. Police state, this ain't the Soviet union. The SNP ain't the GESTAPO. You are, with your skewed sense of reality. Penny drop? You'll need a coin-star.

Stuart Smart - have you read S/R's posts on GIRFEC? Have you seen the SNP 'Government' disregard people from the 2/3rds majority who responded to the 'gay marriage' consultation with a 'No thanks' to the people down here in Ruralshire where the councillors are calling a halt on even more wind farms, but the SNP are overruling them and ruining our tourist industry?

It's already a police state which is unaccountable to Scots. The European Arrest Warrant means any one of us can be picked up by police and locked in a dungeon in any of 27 other countries.

And isn't it funny how lefties who disagree resort to questioning others' mental capacity when they ought to be examining their own and learning the facts, of which they are clearly ignorant?

S/R - Yes, future governments in an 'independent' Scotland would most likely be alternately SNP and Labour. What a recipe for disaster!

As I said, it's a great shame. Run properly, Scotland could be amazing, but the mainstream parties have a long record of mismanagement.

As JRB hints, we'd be better off staying in the UK and getting out the EU. If Oily Al was to proceed along Swiss lines then he might even get my vote, but being even further enslaved by the EU than we are now is not going to do our 'children and grandchildren' any good at all.

@ Stewart Cowan's first comment: is it not the case that if Scotland secedes from the Union, she will also automatically cease to be in the EU? As you suggest, that's even more significant than no longer being tied to the UK.

It's also possible that Scotland *is already* free:

... and I would respectfully suggest that the big issue for Scots who wish to stay that way, is to form an alliance against the empire-builders:

- though I still think both Scotland and England would be better off in a united independence.

@Sackerson - That's a very interesting viewpoint on that blog, if the conditions for the Union were as he says.