Food Prices In An Independent Scotland 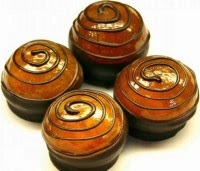 Before I go dashing up the A9 to visit the Highland Chocolatier’s hideaway in Grandtully, I wondered if many of you have noticed the latex propaganda oozing out of the No camp’s cupboards?

Even the BBC’s in on the act, although Mr Peston has been fairly reasonable in his musings.

Now it can’t be a surprise to anyone that, if we vote Yes, then your bag of McCains chips or Melton Mowbray pork pie is going to cost so much more.  Horrors!  I’m quivering in my slippers at the very thought.

According to Peston and others, ‘big business’ doesn’t want to invest in an independent small country.  Does that mean we’ll finally be free of the awful Tesco? If so then that’s enough to sway many floating voters to the positive.

Of course ‘big business’ know full well that they’ve been overcharging in their Scottish supermarkets for years.  When I returned home 20 years ago the cost of my weekly food shopping was very noticeable and was at least 25% more than I paid when I lived in Shropshire.  Roll out the excuse; ‘transport costs’. Indeed, for some foods the cost of transporting from their (mainly) south of England distribution depots is obviously higher to Perth than it is to Salisbury, but what happens when they charge 25 -40% more for Scottish produce.

Where I live is was once upon a time the European centre for soft fruit.  As a child I picked raspberries, strawberries and blackcurrants in order to increase my meagre pocket money.  Today the best raspberries still come from this area, yet some supermarkets charged 30% more than they were charging in some English stores for selling them in one of their stores just 5 miles from where they were picked.  Why?  The same old chestnut - transport costs.

In Scotland, over the years, farmers have been discouraged from growing vegetables so it can be difficult to find local produce, but it is there and it’s far fresher and usually slightly cheaper than supermarket vegetables which have been flown half way round the world.  As many regular readers will know, a couple of years ago I stopped buying produce that had been on an aircraft for more than a couple of hours and I’m still here.  Yes I miss asparagus when the local farm has a bad year (as it did this summer), but it’s not a vital part of my diet and I prefer to give the asparagus from Peru a miss.

When we’re independent our farmers will have to alter some of their priorities and return to producing food for the country. We may be lucky enough to see the introduction of a Scottish supermarket chain like the old Wm Lows which provided a very good range of Scottish foods.

I don’t think the cost of our food will be any higher than it is now and hopefully the unsubstantiated threat from the No campaign will help us focus our minds on ensuring that if we buy local we’re keeping prices within our own control.

Now I must leave you.  Some chocolate covered cherries, sitting on a shelf in Grandtully, have my name on them.  I don’t really have a sweet tooth but these are divine and because I want to buy some gifts, they will be my reward for going!

Am totally with you on this one, could survive happily without Tesco et al.

By sheer coincidence, virtually our entire menu for the Christmas holiday is Scottish sourced.
This has come about not through some positive political discrimination but simply because they are a better quality products, and much of it is local.

Loch Fyne Smoke House – the quality of their produce is exceptional and the on-line delivery service is second to none. = http://www.lochfyne.com

Connage Highland Dairy – from their farm on the shores of the Moray Firth their cheeses are to die for. Simply superb = http://www.connage.co.uk/Home.aspx

"When we’re independent our farmers will have to alter some of their priorities and return to producing food for the country".

Oh not half luv, they'll have to start farming to produce things, rather than farming to draw subsidies...

If you decide on independence and you want food to become less expensive then simply stay out of the EU. The CAP has the effect of keeping food prices within the EU artificially high. Sourcing food from outside the EU without the EU barriers will ensure a much less expensive supply of food. In fact Scotland's supermarkets would be flooded with visits from South of the Border to take advantage of the cheaper prices. Good time for some enterprising Scots to start supermarket chains of their own perhaps opening the first one at Gretna Green.

Chinese Ginger Florentines. I drool at the thought. But isn't the food price thing a bit of a nonsense? My cousins manage quite nicely on fried Mars Bars.

"Does that mean we’ll finally be free of the awful Tesco? If so then that’s enough to sway many floating voters to the positive."

C'mon Rosie - a pound to a penny, Tesco has more customers than there are floating voters.

Excellent and enjoyable article, Rosie, back to your zesty and incisive best
However, nation-wide pricing is a two-edged sword. The big chains can absorb the extra costs but the local shops in remote areas cannot compete.

Strangely enough my order from Loch Fyne arrived yesterday JRB. I agree with you, their products are second to none. Haven’t heard about the dairy though and there’s a cheese lover in the house. Will investigate. Many thanks for your good wishes and the same to you and yours.

I agree Budvar. Too many fallow fields around here.

Well said Antisthenes! I’ll fight tooth and nail for us to stay out of the EU.

By the way I bought some of the delights in the photo today. They look far better than in the photo. No, they’re not for me but for a diabetic friend who misses chocolate.

I suppose they do Joe, but that doesn’t mean to say I have to shop there. That’s not true actually because they’re the only supermarket here really so it’s a monopoly. The co-op used to be fine but it’s gone down hill recently.

Thank you Hamish. Yes I understand that and people who live in remote areas expect to pay more because they understand volume of sales reduces prices (or can do). Being independent should not cause food prices to rise though.

I second the opinion of Loch Fyne products which I usually buy when I'm leaving Argyll and heading South.

The trouble with Tesco is that it sells things people want to buy. They are sneaky like that. Years ago in Derby there was a very nice traditional grocers in the market place which closed down as a result of Tesco et al. Many people of our acquaintance bemoaned the fact.
"O" said my father "I didn't know you shopped there".
Most said, no they didn't.It was too expensive but it was very handy for the unusual items which the supermarkets mostly did not stock then.
"Well then " said Dad "You've only yourself to blame, haven't you?"

I don’t think Tesco do Edward. They stock what THEY want us to buy - here anyway. Everything is their brand and choice has gone, but then they can do that with no other large supermarket in a 20 miles radius.

Our little farm shop survives and we know it’s more expensive, but we just buy less. His dirty carrots are to die for!

May be William, but the nonsense was quickly verified by the No camp.

simple answer - let's take the 'markets' out of the food chain and back to their localities.

The first principle for farming - feed the nation.

Pearl of wisdom from arsed.

" let's take the 'markets' out of the food chain and back to their localities".

May as well go the whole hog and go back to subsistence farming.