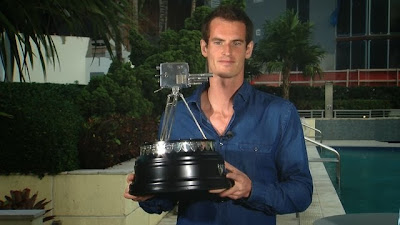 Last night he (finally) won the BBC’s Sports Personality of the Year.  You can see his acceptance speech here.

Why could Mr Murray not bring himself to break away from the Miami sunshine to attend the actual ceremony and graciously accept his public accolade in person and in situ?

From the outset he has been the runaway favourite to win; he could so easily have put his training on hold for a day and flown to Leeds and be back in training within 24hours.

If he was strapped for cash, I feel sure the BBC would have happily contributed towards his expenses.

Well done indeed Andy.
But have to agree with JRB that he should have made the effort to be there to accept the award.
Maybe the Beeb could not inform him early enough that he had won.
He does rather confirm the image of the dour Scot, accepting the award from the equally brilliant and equally dour Martina.

Oh JRB, you really are out of the loop aren’t you? :D Why should he come over to accept it when the BBC, in the past, has done everything to ensure he’s ‘the unpopular Scot’. He’s dedicated to training and not even coming home for Christmas I understand. Naw, I’m with him on this one (of course!) and I do think his speech was gracious and sincere - then again, I would, wouldn’t I? :D

Hamish, what do you want from your sports men and women? Not everyone has an outgoing personality and the lad struggles because his personality includes shyness.

I liked his speech, particularly when he spoke about his voice tone.