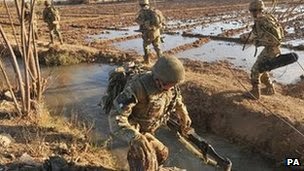 It's with a heavy heart I record the death of a British soldier in Afghanistan yesterday.

He served with 14 Signal Regiment (Electronic Warfare) and had been on patrol in the area of Kakaran, north east of the provincial capital Lashkar Gah.

His death brings the number of HM Forces killed in Afghanistan since 2001 to 445.

The Royal Signals play an essential role in war and although their role has been changed by modern technology over the years, danger still lurks, as it does for every soldier on active service.

May his family and friends find his loss less devastating with the passing of time.

I had, mistakenly, hoped that such posts as you make were a thing of the past, having had no deaths since April.

But it has proved not to be.

The rise in casualties started with deployment to Helmand. That was the mission which "Dr" John Reid said would be accomplished without firing a shot.

If there were any justice, Reid would be placed in the most exposed position in the very last rearguard unit.

If it supposed to be winding down, how come 7 Armd Bde is out there? Another tragic death but there may be more to come in a last flurry of action.

Yet another completely wasted life, massaging the egos of Blair, Brown & Cameron.

Before MPs are allowed any 'fact-finding' visits to exptic locations, they must be compelled to spend 3 months fact-finding in rural Afghanistan.

MSM making a deal (excuse?) of this awful latest fatal tragedy being the first in months - how many wounded in the period following the last deaths in April? It appears from official figures that since April until August 2013 - approximately 240 UK combat victims were hospitalised.
So profoundly sad.

Thanks for all your comments. Clarinda, the official figures for casualties of all degrees have yet to be published - the up to date ones.