A Little Of Wester Ross Is Safe (for now) 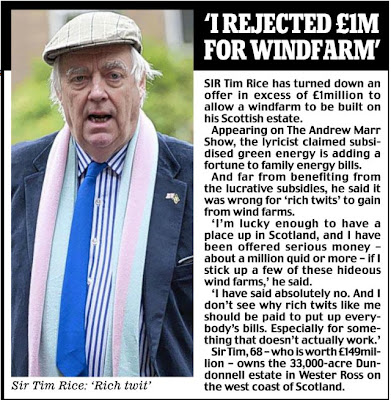 Good on you Sir Tim!

Just wish we had a few more ‘rich twits’ like him up here in the Highlands.

Compare & contrast the principled stance of Sir Tim Rice, with those of the money-grabbing politicians such as Tim Yeo & Selwyn Gummer.

Wish we had a few more throughout Scotland JRB but I appreciate how badly served your area has been over the years.

Let's not forget the likes of Cameron's wife's father Joe. They're all at it.

Give him a standing ovation.

"Give him a standing ovation"

I'm sure he didn't get many for his music...

Thanks Conan. Good to see you too. You're right though, Tim Rice didn't get many standing ovations for his music. Wasn't that because he is a lyricist rather than a composer? ;)

And let's not forget Mrs. Nick Clegg who works for a firm which sells wind turbines.
When the EU Common Agricultural Policy came in, I thought I would never agains see such a massive waste and misdirection of resources but the climate change fraud has it beaten hands down.

I wonder what other investment Mr Rice (as a land-owning "rich twit") makes for his local environment and tenants? It is interesting to look at Who owns Scotland and what they do and don't do in the best interests of their 'properties'.

I note that further north in Coigach the locals are angry over external interference in their project to have a single turbine to assist in re-generating their economy and sustaining a dwindling young population. We visit the area at least twice a year to enjoy the scenery,local services and amenities. A single turbine will not prevent us from returning.

What real evidence actually exists that such constructions reduce tourism etc.? The Coigach locals are concerned over the "misinformation" produced by those who they consider have little understanding of the area's vulnerability. What will reduce our visits will be the disappearance of local amenities and services.

To regard this and similar communities as some quaint petting zoo without understanding their integrity and needs for increased investment to sustain the population is another version of clearance.

No doubt when those leaving these areas seeking employment, housing and education come to our towns and cities they will need energy from nuclear stations - and where will they be situated? Not in the middle or near populated centres (note the popularity of Trident pitched 40 miles from Glasgow) - but somewhere in our/their countryside. Not only are we NIMBYs but NITBYs (T-Their) as well - so where?

Just as the penny-farthing cycle was inefficient, its evolution bears the same principle but with a much more attractive profile, output and usage.

Oh, I never knew she was associated with these things Edward. Food for thought.

I understand your points Clarinda and you know my opinion of on shore wind turbines. They're not cost effective is the bottom line, although the global players are happy to provide small communities will sweeteners - courtesy of those whose electricity bills have risen by over 50% in 3 years. I'll stop now. Got to watch the BP. :D