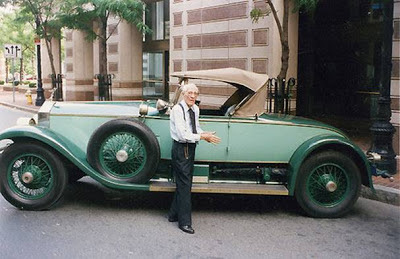 Most of my generation were brought up to respect our personal material items because after the war our parents had little, if any, spare money to buy them.

Some people were more 'lucky' than others and came from wealthier households, but that didn't mean they did not cherish their belongings in the same way as those with fewer.

Can you imagine even having the same car for 82 years though?

Let me introduce you to an American, Mr Allen Swift.  Mr Swift received the 1928 Rolls-Royce Piccadilly-P1 Roadster (pictured with it above), from his father, brand new, as a graduation gift in 1928.

He was the oldest living owner of a car that was purchased new and it was donated to a museum after his death.

That's British engineering of a bygone era.  I don't think they make them like this anymore. As well as losing much of our renowned engineers we have also lost the ability to produce quality.  Is it because we no longer respect quality or is it because people today don't recognise it?

And so environmentally-friendly too.

OK it may have done only about 15 mpg [full-size Imperial Gallons], but modern cars have a planned life-expectancy of maybe 15 years.

Real quality is no longer marketable because the marketeers rely on perceived or built in obsolescence.

Now we only have bling -which makes all or most of us victims to the fashion marketeers.

What is strange is that by being a victim can be perceived by any species as being a sign of success.

We had a British Park Lane model which was, perhaps, 30 years old and though the mechanics and bodywork were in good condition there were lots of little things like indicators and curtain cords that didn't move as a result of rusting and dirt. As kids it was fascinating to find these little features 'hidden away'. A friends 'Rolls' had a pair of 'jump' seats hidden in the floor and ours had a compartment for a wine bottle and glasses!

Considering the cost of this in 1928 and the cost of a working mans car,and what the cost would be in todays money,if you then built a car today to the best standard,the cost would probably be about £1 million,and would probably be capable of even longer a life span. So daddy was not a poor man either.Few of us could afford a car like that, but the cars we can afford for the cost are far better now. Austin seven anyone?
The Roller is beautiful,yes, I'm jealous, but the maintenance costs would give me a heart attack.And I probably couldn't afford to start it either :-(

The culture of Built In Obsolescence is to blame, all the time it was running they couldn't sell him another one. so things had to change

Every thing from cars to washing machines these days has a built in self destruct. They have also been made unrepairable, time was you could keep your car going with a Haynes manual and Halfords. Now some models you have to take it to a main dealer to change a head light bulb as only they have the right spanners

The key to quality is a combination of sound engineering desgn and QA (Quality Assurance) Too many British firms took a perfunctory attitude to the latter.
Drive it round the block and see if the wheels fall off was about the sum of it.
Japanese companies thrived because their QA teams were indepndent and if the product did not measure up, it did not go out the door, no matter how loudly the narketing people screaned about wanting the product now.
A lot of my business was with Japanese clients and the QA people wre the bane of our lives with their pernickety requirements. But I came to have a great deal of respect for their attitude

Sorry about the typos. Poor QA on my part.

Well he would have washed it with soap ad water Joe rather than today's chemicals, so you're right, it was environmentally friendly. :)

Exactly Crinkly and that's one of the reasons engineers go to places like Germany.

Dyson is one of the few good British examples. I've had mine now for 10 years and had one service costing £70 during which the whole system was more or less replaced. I'm sure my Dyson will see me out but I can't say that of any white goods I have.

I always thought certain components were made here and exported Jim. No idea where I read that but I know better now. :)

I did say he was a fortunate young man Apogee. :) Mind you I have a friend who was also fortunate and received a Morgan when he graduated. He has a Ford Mondeo now. :)

Jings Pavlov's Cat, how often does that happen these days - something breaking down within weeks or months of the end of the warranty? Too often to mention.

I think it's possibly much the same today Hamish. I remember many years ago a relative who worked on car production saying the very same thing and the pressure was for quantity not quality.

Been on the wrong edge of vehicle QC.
Car, a week out of warranty and dealer says the gearbox bearings are shot. As I had complained they were noisy for the last two services ,they suggested they would replace the bearings if I paid the labour. Knowing the cost of the bearings,about a fiver, and the labour costs,about £60, I suggested I would pay for the bearings, or I could have a talk with General Motors in Sydney. No further argument. The quality problem has always been there,and the above was half a century ago.Morgan's , MG's etc were pretty rough, Basically mass produced kit cars,Sooner have the Mondeo. Like my creature comforts too much now-a-days :-)

Apogee I had one of the first (and only) Honda Civic diesels some years ago. Within a year out of warranty I'd had to replace bearings in three wheels. Honda weren't interested.

Also it was claimed it did 40+ per gallon. I never got more than 30. When I complained I was told, off the record, that it possibly hadn't been thoroughly tested.

Got rid of it as soon as I could. Too expensive to keep.