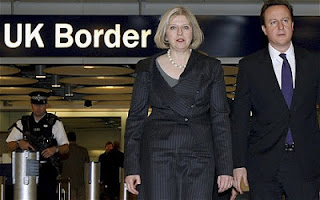 The furore UKIP's success in the English council elections has shown a few of the true colours of Westminster politicians.

David Cameron is floundering, not in a pond, but in an ocean of resentment against his weaknesses regarding the EU and immigration.  Until the recent election he was confident that the people - particularly his tory colleagues and supporters - would accept his proposition of an in/out referendum on the EU in 2017, adding the aside that of course it was dependent upon the Tories winning the next general election.  Pie in the sky really, because the chances of the Tories winning an outright majority is perhaps 50/50.

This past week quite a few of Cameron's senior colleagues have said they would vote Out in a referendum but say they will abstain from the vote this coming week, should the Speaker accept the amendment. Abstaining is at times a cowardly act, but then politicians think first about their careers and the good of the country appears to matter little.

The mantra that 'we're in a coalition and therefore all have to agree about EU matters', is no longer believed. Most Tories think the LibDems have far too much say in government and the PM doesn't have the capabilities of standing up to Clegg & Co; thus the LibDems have had a very easy ride for doing nothing more than disagreeing with the Tories.  Most people know that Nick Clegg will never consent to any form of withdrawal from the EU because his pension relies upon the organisation staying intact.

Then comes the elephant in the room - immigration. Due to mass immigration in the past 10 - 15 years, parts of England are unrecognisable. Integration for many, if they wish to integrate, is nigh impossible because services are completely overstretched and cultural differences make community balanced. In some parts of England it was reported UKIP's successes were more to do with the UK government's immigration policy than the EU. Perhaps that's why UKIP hasn't achieved a foot hold in Scotland.

Immigrants aren't to blame for the problems. Back in the early 80s Margaret Thatcher did away with what was then known as Customs and Excise, (the Customs policed our borders and coastline and the Excise checked all goods entering and leaving the country).  It worked reasonably well although there were faults then. A major one was that individual entries to the country were not documented, but Customs officers were assured that once the wonders of IT were installed, it would be simple to record every arrival and departure. Today that still doesn't happen because since the old C & E was 'reorganised', few, if any, of those who had the skills which made our Customs successful, are around and our borders are now policed poorly.

How would an independent Scotland handle immigration?  The SNP seldom talks about it, except to say that 'immigration will be encouraged' and perhaps that's understandable, because Scotland would possibly have to pool border security.  London would surely insist that that Scotland would not become a 'back door' for illegal migration into England.  As Scotland has very limited policing of our vast coastline these days, how an assurance could be given would be debatable.

While a 'new' Scotland would want to encourage immigrants, the numbers must be controlled to ensure that integration occurs and ghettos don't pop up all over cities.  One manner is which to control those arriving would be to use a system such as Australia, Canada and the US have been using for some years - a points system.

However, unless England introduces such a system it would be pointless Scotland insisting upon it, because how would it be policed?  People don't seem to have any desire to have border controls at Berwick-upon-Tweed or Gretna.

But there are plenty more issues for those supporting the cause of Scottish independence to discuss before immigration.  In Scotland we have never had the problem of mass immigration flooding our services, yet we still, in a very small scale, provide every health leaflet in numerous languages and costly interpreters in courts to translate for some who have been here years yet have no grasp of the language.

Is it any wonder the Yes campaign are quite happy to discuss pensions, benefits and other matters when so many in Scotland think an 'open door' policy would be acceptable?  Many countries have had great economic success due to the zeal of immigrants (not least Scots), but a balance has to made as to the number and skill set of immigrants to a new Scotland.  A double-edged sword indeed.

Joe Public is half right. A lot of the "English" have some Scots ancestry including a remarkable number in Essex. There was once a time when any sizable English town had its Pipe Band and a club (WMC often) that had a large number of Scots and related. Never mind those with Irish ancestry including quite a few from Ulster. As for the Welsh...But if Scotland and England have different migration policies this raises very awkward issues. Personally the idea of selling up down here and moving to a location that boasts one or other of the favourite family distilleries is becoming increasingly attractive.

I would consider it Joe Public, the landscape is lovely, the pace of life is better, there are plenty of distilleries - all sorts of plusses. Unfortunately the weather is usually even worse than down here and I can't stand the damn midges that appear as soon as summer does!

I wonder....Has anyone considered that if the majority of non Europeans in England decided to move north of the border, they could,even playing by our rules, take over this country.
What can we do if such a thing happens? Accept the takeover or leave!The Chinese did it to Tibet.
Time to rebuild Hadrian's wall.
Properly!

Apogee has given me inspiration …

In the event of Scotland gaining its independence, it would do well to consider a fifteen year moratorium on all but exceptional cases of immigration applications.

Scotland will need the window in order to set and plot its course, maximise the use of its assets (that includes its people), fine tune its institutions, define and re-invigorate its character and values by both constitutional rights and the affirmation of the peoples sovereignty.

From what I can understand of Scottish Government policy, Wee Ecks Wa' will be an empty field with no obstructions, don't remember voting for that? Did we?

In the past 15 years there has been a great influx of retired English in this area Joe. Our health provision is the main attraction and they're very honest about that.

Do the Caledonian Clubs still exist Demetrius? I was always amazed how much better the English did our dancing.

I agree and that's why London needs to get a grip on immigration.

Never considered it Apogee and too scared to do so.

But doesn't Wee Eck want to open our country to all JRB?

Excellent points Crinkly. Many thanks.

I wonder how long it will be before an independent Scotland is tempted beyond endurance by EU capital? Is that not what has happened in Greece, Spain and Italy? Massive projects funded by EU money (on loan, of course) where the constructors take the money and run, leaving behind the debts and white elephants? And, thereby, the enslavement of the the people (vis, Cyprus)?
Will Scottish politicians resist the temptation? Of course not! They haven't even been able to resist the WHO and Tobacco Control!

Well said Junican. Short-term thinking is all today's politicians do.