Murder In The Name Of Profit 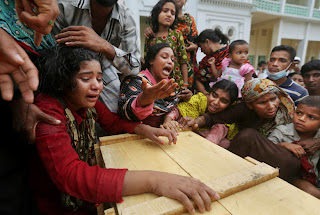 Photo courtesy of the Guardian

I can hardly bring myself to watch the television pictures of the devastated Rana Plaza building in Savar, a suburb of the Bangladeshi capital of Dhaka.  Several thousand people were buried alive when it collapsed and the rescue services are unable to cope.  At least 3,000 people were believed to have been in the building at the time.

The deadly incident has already been called the worst industrial accident in the country's history and it serves as a reminder that nothing has changed when it comes to the inhumane conditions under which clothes are made in Bangladesh for European and American tactile companies and clothing chains.

Nothing has changed about the culture of corruption that is rampant there either; the abundance of illegally procured construction permits and the lax attitudes factory owners take towards safety standards.  There were five garment factories in the building as well as the offices of Brac Bank.  The bank manager decided to close the bank on Wednesday because of the severity of the cracks in the walls and his actions saved his 11 employees' lives.

Factories in Bangladesh have been under enormous pressure for weeks from their foreign customers because, until recently, strikes and protests had been disrupting much of the public sector.  Trucks loaded with goods destined for Europe and the US were stuck at the port of Chittagong and many buyers started avoiding Bangladesh altogether.  Tesco publicly considered shifting production to Turkey or even Africa. All this contributed to manufacturers being desperate to make up for lost time.

Some of the clothes made in the five factories were produced for the German market, but they also supplied the Irish-based Primark.

How often have we heard companies like Primark say that their suppliers are held to a code of conduct: 'A safe and hygienic working environment shall be provided. Adequate steps shall be taken to prevent accidents..' (taken from their website).  Most of us know these codes aren't worth the paper they're written on but we still buy their clothing.  I've bought from Primark in the past but found the quality was extremely poor. I like a jumper to be wearable after more than one wash.

It was competition from the likes of India and Pakistan which decimated our clothing industry.  Price is the bottom line for buyers and it doesn't concern them one bit and of course price has overtaken quality in our now throw-away society.

Some months ago Mary Portas fronted a television programme which involved selecting and training young people in the art of machine sewing.  Combined with the novelty effect and superb marketing she successfully sold her knickers to top stores.  The knickers weren't cheap - £10 a pair if I recall - but people bought them because her advertising slogan was 'They're British Made'.

If the authorities in places such as India and Pakistan refuse to get their act together regarding safety for their people, then surely it's time for UK buyers to consider manufacturing again in this country.

If the clothing industry can only be improved if it pays decent wages and introduces a new kind of regulation involving independent, unannounced inspections of factories funded jointly by supplier, contractors and trade unions.  If buyers were made responsible for human rights abuses in their supply chain, it wouldn't take them long to come to their senses and who knows, they may even decide to return some manufacturing to their home countries.

Savar may be the worst incident in history but it's by no means unique. In 2005 the town's Spectrum Sweater building collapsed, killing 64 people.  That building too had illegally been raised from four floors to nine.

The buyers must take some responsibility towards using such suppliers and aiding murder in the name of profit.

Note:  Since writing this post Bangladesh's first internet newspaper has reported that 'UK's Primark to pay Savar victims'.  Too little too late?

There must have been a lot of backhanders going on. How can the authorities not notice extra illegal floors being added to a building ?

But such examples as the overcrowded sweat-shops of Bangladesh are not alone.

The coffee we drink; the chocolate we eat; the herbs and spices we use in our cooking; to name but three commodities are not all produced from fair-trade sources.

In recent posts you discussed ‘Globalisation’, such disasters as this one in Dakar, only prove that for global big business - people are expendable – profits are not.

And hands up those who remember the Bhopal disaster of 1984 where 4000 died and 500,000 were injured so that western farmers could have cheap pesticides.

Thirty years on and we are still exploiting the poor in pursuit of profit.

I suppose we should reflect on this when we complain about what appear to be petti-fogging Health and Safety requirements.

Every action has a consequence and it isn't necessarily what is expected or wanted.

Times and attitudes change and despite 'globalisation' they aren't the same around the world. Suppose, for instance, that Primark insisted that Irish regulations were to treated as the minimum requirement for its overseas suppliers how on earth would they ensure compliance? They would need their own inspection teams because as sure as night follows days the relevant 'compliance' certificates would be produced if required. Heck we can't even be assured of 'compliance' in the over-regulated EU single market. Horse burger anyone?

Bad things can lead to good. Slavery in the USA is called 'bad' but without it the southern states would never have developed cotton growing pre-machine age. There surely is no doubt that the life of the slave descendants in the US is a lot better than those of the 'free' Africans.

Primark is a company in the portfolio of Associated British Foods (ABF).

I'm not sure how far it is reasonable to hold a company responsible for its suppliers. I suppose it depends on whether they do things like make site visits, inspect the toilets, check the drinking water - or if they just ask the suppliers to tick a box so they can truthfully say they were assured that standards had been complied with.

Yes indeed JRB but my point was that of cheap clothing.

Sadly I don't think the exploitation will improve in the future.

Good points JimS. I've read somewhere M & S have their own inspection teams but doubt if they're 'resident'. Seems that factories are warned of inspections.

Like the Care Commission etc here, the forewarning makes the exercise rather pointless.

Thanks for the link WoaR. I think the responsibility should be shared among the contractors, suppliers and all others concerned with the product.

These companies make £billions in profits.

We're also guilty of expecting clothes for the price of a steak.

I hardly think that we can reasonably blame Primark and the like for faults in the building construction. Looking at what one can see in the photographs, it would appear to have been a concrete building, but without the necessary reinforcing steel, which would not be apparent once construction is finished. In countries like this (and many nearer home) such building regulations as exist are rarely enforced - to bribe an official is far cheaper than buying the steel reinforcing rods!
Moral arguments about whether we should buy clothes produced under such conditions are difficult. If we don't buy, people will starve with no income. If we are prepared to pay more, the company buyers will look at countries like China, Thailand, Malaysia, etc, where there are likely to be less problems.

I'm not suggesting we fully blame Primark EP but they must take some responsibility. Surely they have inspectors?

Sadly I don't think things will improve in these countries until the contractors withdraw their support. Only then will the governments wake up and realise one of their milk cows has left. Who else would take their place? Nobody.

Even if they did have inspectors should they have employed building inspectors? As you acknowledge, there is a lot of corruption in Bangladesh. It is that that any fire should be aimed at than Primark's lack of engineering inspection of it's suppliers buildings.

Primark has some responsibility. And it carried that out by checking the working conditions. That the workers weren't in slavery, that they had rests, etc. But that is the limit. After that the country's own authorities should and must take responsibility.

Any call to blame Primark for the failure instead of the owners of the building and the business owners to look after their staff and occupiers lessens the pressure on the authorities in Bangladesh to sort out their internal corruption problems.

I'm not wholly blaming the contractors SBML, but they have to accept some responsibility. Surely they were aware that the building had increased so much in height for example.