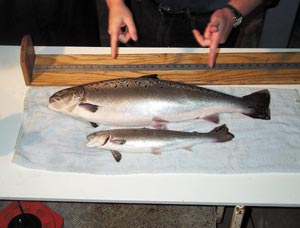 Recently I had a post about GM food and the reluctance of the EU to allow consumers to make informed choices by labelling foods if they are GM.

In the US companies are seeking government approval to 'grow' controversial salmon.  This will be the first ever genetically engineered animal intended for human consumption.  The fish has been modified to grow twice as fast as normal salmon and is produced by inserting a growth hormone gene and another gene taken from the eel-like ocean pout.  The salmon would be sterile and raised in vast tanks on land rather than in sea cages. Experts, trying to combat world hunger, are calling on the British government to back the use of GM farm animals on the dinner table here.

The push into GM meat could see the production of hens that have only female chicks and cattle made disease resistant using genes from baboons.Scientists at the Roslin Institute - where Dolly the sheep was cloned - insist fears surrounding 'Frankenstein' foods can be overcome and want the Government to support the spread of GM into farm animals.

I'm in agreement with Dr Helen Wallace of GeneWatch, who warned "GM fish escapes could pose a serious threat to wild salmon populations".  She also stated that "An EU move to allow the use of GM animals and insects modified to help destroy crop pests amounts to engineering whole ecosystems and no one knows the consequences of this."

Closer to home the new EU seed law is causing concern.  It proposes to ban old and rare varieties farmers varieties of traditional seeds.  That may not be of immediate interest to many, but think about the consequences. Seeds have been exchanged amongst the farming communities for generations and now the EU want every seed to be tested to see if they meet various criteria.  The criteria have been designed around modern hybrid varieties suitable for industrial agriculture and in general only industrial hybrid seed will pass the tests.  Many of the valuable old varieties, currently in use by millions of home gardeners and small farmers, will be unregisterable and therefore outlawed.

So the introduction of GE fish and now the proposal to wipe out valuable old seed varieties, will give more control of what we eat to the 'big boys'.  The seed industry is big business and it seems they will succeed is wiping out their much smaller competitor.  That's globalisation.
Tweet
Posted by subrosa at 09:41

In playing God and altering natures gene structure man has once again forced opened Pandora’s Box – but this time, not even Elpis is left to save us.

Be afraid for the future – be very afraid.

I wonder if the proposed rules if applied to politicians would "improve the breed", or can we declare them to be a failed experiment and ban them.
Please?

It just belatedly occurred to me that
if frankensalmon grow to five times their natural size, if some escaped (as they will), what will they do to the food supply for other fish, and if they are not sterile, and can breed (mistakes,like accidents do happen) what then? And what if they change behaviour to similar to a barracuda, can anyone say it won't happen? We do not know and neither do the companies producing these freaks. Remember, don't play with your food.

I'm with JRB on this.

The real Big-Boy in all of this is nature and while the conglomerate big boys are claiming it is for our benefit in reality it is more to do with shaping us.

How long before we either fall prey to the genetic lash or are 'modified' to work five times more effectively, or to withstand 5 degrees more cold or heat as an answer to the energy problems and our sterility engineered by IQ quotant?

The seed merchants wouldn't do very well from a friend of mine. His father bought a packet of runner beans for planting back in 1927 when he first had a garden. Each year he harvested some for the following year. My friend is still doing the same.
The modern farmer can't do this, the hybrid foods all produce sterile seed, forcing the farmer to buy again from the seed merchant each year. In the case of the poorer African countries this ensures that they can never become self sufficient as saving part of the grain for seed is now pointless. So how much is big business behind the EU proposals rather than real need?

Apogee, I wholeheartedly agree with both your posts.

Regarding your second comment: ".....if frankensalmon grow to five times their natural size, if some escaped (as they will), what will they do to the food supply "

Enter the Law of Unintended Consequences:-

Everything down the food chain (& that includes us humans) reacts the same way. Everything grows to 5 x the size, including humans' appetites. So we all need 5 x as much food to nourish us!

It is frightening JRB, yet the excuse is that it helps third world countries. Dig just a little and we find there's little proof of that.

I dread to think what diseases will eventually appear and of course by then there will be no 'natural' alternatives.

You have a point there. It's reported these salmon are sterile but as you say mistakes happen.

Exactly Crinkly. Once the natural eco-system is tampered with anything can happen.

EP, some farmers around here still do that but they're small farms. The big boys who supply the supermarkets can't of course.