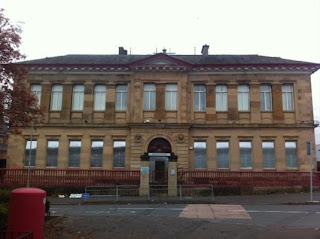 Last year it was reported that Muslims in Glasgow intended to purchase the former Holmlea Primary  building in Cathcart, to turn it into a secondary school for their children.

However the purchase fell through and they've now bought the Category 'B' listed building Abbotsford House (pictured) in Abbotsford Place which they intend to use as the first Islamic secondary school in Scotland.

The bid is being led by parents and professionals concerned about the environment in Scotland's schools.  Glasgow Community Education Association (GCEA), which is behind the project, claims attending mainstream schools is resulting in 'unsocial behaviour' among Muslim youngsters and that the lack of Islamic schools is forcing Muslim families out of Glasgow.

Glasgow has one Islamic primary school and according to its website it intends to open another in Dundee.

Previous attempts to establish Muslim schools in Scotland have been unsuccessful.  Both the Iqra Academy in Glasgow and the Imam Muhammad Zakariya School for girls in Dundee closed after receiving negative inspector reports. The Iqra Academy, which shut in 2003, was critised by inspectors for giving pupils no opportunities to mix with the local community and for its treatment of girls at the school.

I'm not a supporter of faith schools, regardless of domination.  Although I believe this new school is to be privately funded, I believe it will further segregate the Muslim population in Glasgow.  Repeatedly we're told that integration is important to make a sound and tolerant society, but when one section decides to openly reject one of Scotland's fundamental principles, that of a public education for all children, it sets a dangerous precedent.

Often I hear those of a left-wing political preference critising parents who decide to send their children to private schools, yet hardly a whisper about the development of a private Islamic school.

Catholic schools - as well as church schools in England - are multi-denominational these days but I can't foresee a Muslim school opening its doors to those of another religion (or none).

There will be a burden on Scottish Muslims to prove that their schools are - and will remain - non-supremacist, tolerance and not discriminatory against women or minorities.

Back to my question 'Does Scotland Need Islamic Schools?'  I think not. They will bring more division into a part of Scotland where religion causes too much already.
Tweet
Posted by subrosa at 09:05

"Catholic schools are multi-denominational these days"

Try getting a job in one as a non-RC and see how far you get.

No need for faith schools and the Muslims should be told the same.

For me Scotland needs no religious schools of any denomination; we need a fully secular primary and secondary sector. No-one has suggested sectarian technical colleges or universities so why schools?

Incidentally I object to the use of the term faith in this context. It is euphemistic and should be the bald adjective religious.

I place no 'faith' in either faith schools or public (private) schools. Both engender a blinkered society of them and us values.

Children and young adults have enough to learn and digest during their formative years without absorbing the myths and mythologies of religion and class phobias that have grown out of historical propaganda.

I do have one friend who used to teach in one William and she wasn't a Catholic, but she would admit she was unusual.

I agree there is no need. Any additional learning can be done outwith normal public school hours.

Sorry Richard for using the term 'faith schools'. You're right, they're religious schools.

A good point that further education is secular.

I support fee paying schools Crinkly because I think they give parents a wider choice. Yes maybe some parents who use them can well afford the fees but many cannot and sacrifice much in order to ensure their children receive the best possible education (in their opinion).

I would disagree that fee paying schools engender a blinkered society. Some of them provide accesses which no state school does (although they could if they tried).

I’m agin any school or education system which by its structure enhances or perpetuates the divisions that exist within our society – whether they be based on faith or finance.

If we are ever to resolve the schisms in our society - be it catholic or protestant; Christian or Muslim; rich or poor; have or have-nots; them or us – then we must start the process with a common secular education of our children.

That particular Abbotsford is rather pleasant Demetrius.

Well I grow up in a non religious school/private and I didn't like the way the students attitudes are towards their teachers and other pupils, in these kind of schools students like to play around more than be serious at their studies.... These non religious/non private schools don't teach students main factors like how to behave with parents, the public. These days I see the smallest of kids given cheek to their parents, they sware in every sentence. They love cause trouble for the smallest of reasons.

I am a convert to islam and I for one do believe I need an proper islamic school in this country for our children to learn manners and proper atticates. We don't want our children running free on the streets swaring at passers by and being racist..... so what you people don't understand or care about islamic faith or manners! I do want my kids to grow up with some culture to know were they come from and not lose their heads like kids I see nowadays.

There are already religious schools and this country would be discriminating a certain religion when it's citizens are mixed races, if they have anything against such a school.

I personaly would loved to have went to a private school, were all the kids would have been brought up with manners.

A muslim school would be good for Muslims and the reason why non muslim children will be able to apply, is cause their parents don't even have the respect for the schools religion and the studies will be islamic based for our OWN children's sake....

WHAT IS WRONG IN THAT.... Only yous backwards people will always be against any such thing as you are scared that Islam is BAD and we all carry guns.

But once you people get your heads out you butt and think clearly like a decent normal human being then you might just realise how stupid you all think.

I AM A PROUD MUSLIM... I am still learning but the religion yous all hate and are afraid from... Offers only the most respect towards parents, elderly, strangers, family.... Who right mind thinks these teachings are wrong....

I personaly blame all you patents for it's not your kids fault what they hear in the house....