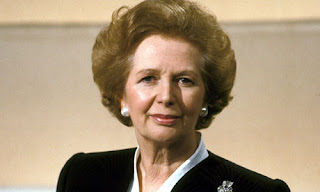 Whatever your political views, Margaret Thatcher was an incredible woman and worked hard for her country.  She was an Englishwoman and her country was England.  Scotland was a mere irritating by-product which, to her good fortune, provided the finances for Mrs Thatcher to modernise her England.

Much has been written about her 'misuse' of Scotland's oil, but I wonder if any Labour prime minster would have used it more wisely.  Certainly Tony Blair and Gordon Brown did nothing to eradicate or change the policies many thought destroyed Scotland's industry.

I admired Margaret Thatcher because she proved that little is impossible and more particularly, the manner in which she worked within the suited and booted man's world of Westminster.  Some of her policies - too numerous to mention individually - were another matter: dire for Scots and the Scottish Conservative Party which has yet to recover in one guise or another.

Britain's first female prime minister is to be given a ceremonial funeral - the same level given to the Queen Mother and Princess Diana.  It's the first time a former prime minister has been honoured in this way since the lavish spectacle of Winston Churchill's state funeral 50 years ago.  Costs are to be borne by the government and the Thatcher estate, with Downing Street declining to reveal, at this stage, the proportion to be met by the nation.

Unlike some of her successors, when she retired from politics, she didn't tour the world for personal gain and chose to live her life in her beloved England.

She showed a strength of character seldom seen in politics and, love her or loath her, let's commemorate her death with dignity and humanity.

I never bought into the idea that she was anti-Scottish. I think she believed her policies were correct and they weren't specifically designed to antagonise or damage Scots and Scotland. She would have remembered a Tory presence in Scotland, in Glasgow, and even Churchill was a Scottish MP at one point. So I don't think she entered office with the view that Scots were instinctively anti-Tory.

She became a useful bogeyman for Labour in Scotland and a myth was allowed to develop that Scottish people had no interest in genuine Conservatism and we're all descendants of Red Clydeside. The Scot Nats have continued this nonsense with the idea that England have a different 'philosophy' from Scotland. Complete balls, of course.

"let's commemorate her death with dignity and humanity"

Indeed. A left-wing rabble descended on George Square last night displaying all their classless, gutless, wretched characteristics. If you descend on George Square to celebrate ex-Pope Benny's death when it comes, you'll find yourself enjoying a night in the cells. Go figure.

I recall Thatcher stating "We Englsih who are marvellous are really very generous to Scotland...."

You characterise left-wingers as classless and gutless despite the fact that they have fought against fascism all over the world whilst Thatcher aided and abetted such as Hussein and Pinochet.

I do not see any signs of your claim that Scottish people have an interest in Conservatism. Where are the signs?

In respect to the patron of this site I will render no comment.

Rosa --A thoughful and well put summery ,no more needs to be said .

John Brownlie:
"I do not see any signs of your claim that Scottish people have an interest in Conservatism. Where are the signs?

A quick look at the 1979 election results and I count 19 Conservative MPs in Scotland. Lack of seats now is no evidence of lack of latent support.

May she rest in peace.

Quite so, but have a look at subsequent elections. You count 19 MP at 1979 as proof of something, presumably, and then equate lack of the same seats as being of no consequence?

Never a political person really, I loathed her at the time; a youngster, my sympathies were with Labour, in the (misbegotten belief) that they represented "the common man".

With the benefit of hindsight and the wisdom of age, it is clear to me now that the UK needed her, for all the conflict she brought; certainly, someone had to take on the unions before THEY took over the country.

In a profession now marked by an utter lack of conviction, with a few fine exceptions, she was a woman of conviction and a politician of conviction. And she did what had to be done about the Falklands; which in turn led to the collapse of the dictatorship in Argentina.

"I recall Thatcher stating "We Englsih who are marvellous are really very generous to Scotland...."

"You characterise left-wingers as classless and gutless despite the fact that they have fought against fascism all over the world whilst Thatcher aided and abetted such as Hussein and Pinochet."

Suffice to say that the rabble in George Square have not fought anything in their lives other than the Department of Work and Pensions.

"I do not see any signs of your claim that Scottish people have an interest in Conservatism. Where are the signs?"

Made-up quote or not it was Margaret Thatcher that said it on 10th February 1990 in a speech in Torquay.

I do not know and neither I suspect do you whether those in George Square were as you insinuate unemployed and claiming benefit.

My point was that you claimed them as being typical left-wingers and, therefore, class-less and gut-less which clearly all left-wingers are not and it is always unwise to generalise.

Now of course the Conservatives would have more votes in a General Election than the SNP being a UK party but the point I was making it that there is no sign of Conservatives making a come-back in Scotland at present.

It may well be that they would do so if they went along with Murdo Fraser's ideas for the party in Scotland or if they broke away completely from the main-stream Conservative party.

Successive polls appear to have them trailing Labour in a UK context so it may be that in an independent Scotland the Conservatives could command much more support.

I'm not sure its right to elevate a person in death who in life did some pretty awful things then hid behind the 'courage of their convictions'.

Margaret Thatcher was the first of the glassy-eyed breed of politicians who thought they were right based on conviction as opposed to reasonable deduction and common sense.

Something had to be done at the time, just not what she and her government ended up doing.

Of course I'm not glad she's dead, that would be daft. I do look forward to the end of the media circus though as I'm sure her family do too.

well she at least got the family she deserved nice bunch.


er! she wasnt English she was a city of Londoner through and through

I never said she was anti-Scottish William. She just didn't care for Scotland.

Believe it or not there are conservatives within the SNP and I've never heard about the 'philosophy' but I have heard our cultures differ and on that I agree.

John there are plenty Tories around but just not enough of them in one area. :) Mind you they're dying off these days.

Oh Crinkly, do feel free, but no bad language. ;)

I'd agree with that Jim. It was the poll tax which scuppered them here, although I benefitted from it.

Indeed JRB, I should have included that in the post.

Thanks for your contribution Elby.

Here's a question for you pa-broon, what leader do you know of has possessed reasonable deduction and common sense?

Not sure Aangirfan, but perhaps it was her scientific background which developed the characteristic?

Don't think she moved to London until she was an adult Niko. I could be wrong of course. :)

John Brownlie, I have searched the Herald and Evening Times archives for that date and cannot find such an explosive quote mentioned.

Google it, William, it was a speech to the Young Conservatives in Torquay! Question and answer session if I remember right.

It would seem to me that Brown and Blair have done infinitely more damage to the UK than Thatcher; thanks to them we are now subject to Eternal Jihad against us, and Eternal Debt.

John Brownlie, it was clearly going to appear on Google but no-one could ever produce the original.

"Mrs Thatcher, also speaking at the Torquay conference, betrayed her impatience with Scottish complaints about the Government by appealing to English nationalism.

Pointing out that local government in Scotland and Wales receives a greater proportion of its money from central funds than the rest of the United Kingdom, Mrs Thatcher added: We English, who are marvellous people, are really very generous to Scotland. We English are the most underestimated people in the UK."

It's clearly an indefensible statement and typical of the lapses in judgement that she began to display after the retirement of Willie Whitelaw.

Another excellent point Elby and of course never mentioned by the radical left. Thanks.

"Here richly , with ridiculous display
The politicians corpse is laid away,
While all of her acquaintance sneered and slanged,
I wept, for I had longed to see him hanged"

I had to chuckle at the lack of foresight of the mean-spirited scum who wished that Lady Thatcher would rot in Hell: do they really want to spend eternity in her presence?

I thought Norman Tebitt's comment
"Betrayed by her friends" was the most apposite.

I attended a meeting in Derby which Tebitt addressed,. There was a small demonstration by nasties outside.
"How about another trip to Brighton, Norm?" shouted one of them. Like much of today's unpleasantness, quite beneath contempt.

Norman Tebbit attended the wedding of a close family member Edward and it was said he was as natural then in his wit and judgement.

Yes I watched his tribute late last night. "Yes that is my one regret - to leave her with her friends."