No April Fools Here (With the exception of Peter Cruddas) 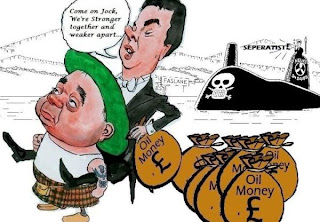 Image courtesy of @Jakimac
Hazel has a superb idea for 'fueling the independence debate'. It may not please the Greens but it would certainly highlight the positive side of independence and the debate needs an injection of positivity. A freebie fridge magnet would be an ideal PR tool and not expensive.

The Sunday Times has been at it again, displaying the Tories ambivalence for independence. No surprise really as they've little to lose when Scotland departs from the Union other than the Treasury income from oil. Their friends in the City will ensure none of their lifestyles are affected, particularly when they're very aware a Union without Scotland will make England bluer than ever.

I had intended to visit a famous old bird today but have decided it may be more sensible to leave visiting until later in the week.

You'd hardly think it reasonable that Peter the boy could manage to get caught twice in two weeks... but way to go, Pete. You've put another spoke in the Tory wheel.

Dave must be fair hopping with anger...and he can't sack him again, and because he is a generous donor, the prime monster can't even banish him forever to Monaco, where he lives.

Och dear. Whit a mess they're in. You'd think they had been in government for 10 years, not fewer than 2!

Peter Cruddas is fast becoming my No:1 super-hero

In little over a week he has exposed the Conservative party as the two faced party of sleaze that we always though it was; that some within the party will sell their soul for a fat six figure cheque.

Now, by shooting the Conservatives in the foot, he has given the SNP and the case for Scottish independence an unexpected boost.

Peter Cruddas has elegantly managed to turn the Conservatives from the ‘Tory’ party to the ‘Toxic’ party.

He has indeed JRB and he's exposed them for what they are. Mind you the Tories, Libdems and Labour are all in the same trough, just with different company.

Hi SR.Like Hazel's idea,in fact idea's. Lot of food for thought in the article. Have to get the voters thinking the Independence way.