All In The Name Of Counter-Terrorism 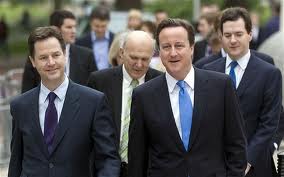 For some time now I've been suspicious of any politician who suggests new legislation is protecting the people of the UK from terrorism. It's such a provocative word and politicians use it to instill more fear into the people in order to keep them subdued.

The only terrorists evident from my tiny space is this country are the coalition. Upping the cost of fuel which in turn increases the cost of food, pleading faux sympathy with the high cost of utility bills and exposing our troops in an unwinnable war are a few of their tactics which could be labelled terrorism.

The latest shows the levels to which our representatives will go to curtail the freedoms of the people.

In 2006, Labour was forced to abandon similar plans in the face of fierce opposition from the Tories, Libdems and privacy groups yet only 6 years later the tide turns and the coalition is leading the country down precisely the same dictatorial route that I thought was solely NuLabour social engineering.  How wrong I was.

Only a year ago Nick Clegg promised to restore liberties stolen by Labour yet he's now supporting a proposal to enable intelligence officers the ability to identify who an individual or group is in contact with, how often and for how long and they would also be able to see which websites someone had visited.

In a statement, the Home Office said action was needed to "maintain the continued availability of communications data as technology changes".
Continue reading the main story

David DavisConservative MP and former shadow home secretary
"It is vital that police and security services are able to obtain communications data in certain circumstances to investigate serious crime and terrorism and to protect the public," a spokesman said.
"As set out in the Strategic Defence and Security Review we will legislate as soon as parliamentary time allows to ensure that the use of communications data is compatible with the government's approach to civil liberties."


Civil liberties?  They're all being slowly withdrawn in the name of terrorism.

Critics have suggested that the proposal would be 'expensive, intrusive and a nightmare to run legally'. Shami Chakrabarti, director of Liberty says ' it is a pretty drastic step in a democracy'.  Even John Redwood disapproves and has a theory that the idea started in the climate change department.

Maybe it's a job creation scheme.  The government will require thousands more staff at GCHQ to undertake the snooping. Just a thought.
Tweet
Posted by subrosa at 09:37

I am more than a little miffed by this latest move.

If the government, or its agents (the police, PF, or in England and Wales the CPS) thought I was up to no good, they must first obtain a search warrant to come to my home to go through my files, my paperwork, my drawers to look for evidence.

Why do they now assume they can bypass this vital protection simply because our files (and paperwork) are stored and sent electronically?

This is a gross violation of our rights and should be fought against.

If we, the great unwashed, simply stand idly by whilst they rake through our stuff, then we deserve it. We really do.

Time to wake up folks.

And once you are awake, stay awake. They will not be happy until there is a camera in every room in your home. Motorola have a couple of billion microchips (small enough to be delivered by a syringe) on the shelves and ready to go.

How much will you take? How many liberties will you let go of, before you will react?

Will you wait for that thousandth cut before fighting back?

Rights are not snatched away outright. They are eroded over time so that we don't notice. They are replaced with benefits.

Which do you want?

I've made my choice and I will fight all the way to hang on to them.

The generic use of the word ‘terrorism’, and all that that should imply, has been greatly debased by our politicians as they use it as a blanket excuse to apply ever more intrusive legislation on us all.

And no doubt any such legislation will be taken up by overly enthusiastic police and regulatory bodies to interpret the legislation as fits their purpose and use it as an excuse to intrude more and more into people’s lives.

Perhaps the true terrorists have actually won, and this is their victory.

Democracy, if not dead, is certainly dying – long live the State.


… so if any poor technician at GCHQ has been tasked with reading this post, here is a little something to get your teeth into –

Funny how when in opposition they opposed this from Labour but now support it in government.

Its just lazy policing, the authorities can't be arsed to do things the hard way (ie. as in 'investigating without infringing civil liberties') so just do away with the civil liberties.

This is an area I have problems with the SNP, not sure what their view is on this but I read today that they're having a 'crack down' on knife crime in our city centres, only its not a crack down on knife crime, its a crack down on people who happen to have a penknife about their person which as far as I'm concerned; isn't a crime.

Over and above all that, I just don't trust the government. This continual chat about 'terrorism', we're more at risk from government sponsored terrorism than anything else. We don't have bogeymen under the bed we have terrorists.

They already do all this stuff - they just want to legalise it so as it is not challenged in a court of law.

After the Lockerbie case the US were quick to circumvent the need for justice and forensic examination to be weighed in the balance by the introduction of rendition.

It makes administration and the spin of propaganda so much tidier for quasi tyrants.

Internet firms will be required to give intelligence agency GCHQ access to communications on demand, in real time.

Imagine that at any time the security services could demand that the Post Office log the destination address of every letter you sent out and the address of the sender of every letter received by you and had to pass that information to the government.

Imagine that they could also demand that every bookstore and newsagent logged the name of every book and magazine that you bought and also sent that information on to the Government.

This is what you'd expect in China or Iran not in the UK. But that's exactly what they are going to do with your email and web site browsing.

And the Security Services don't need a court order to do it. They can choose anyone for any reason the like. They vote green, they sent a letter to a newspaper complaining about the government, they are a member of an anti-road group or are a member of a political party the security services don't like.

This isn't about terrorism, it never is. It's all about tightening the control and monitoring of Britain's population, especially the one's who have independent minds and who question the competence of the government of the day.

I had thought that the one saving grace of the Tories was that they were much more into freedom and liberty from government surveillance and control than the Labour party but that appears not to be the case at all.

Rosie,
According to Dr North it's due to the Elephant in the Room.

Government didn't trust us in 1940 and they certainly don't now.

Of course it is worth mentioning that your ISP logs all this data anyway under Part 11 of the "Anti-Terrorism, Crime and Security Act 2001" and that the agencies who can access it include your local authority and the Food Standards Agency.

There's info on Wikipedia about it.

The only difference with this proposed new legislation is that the Government can access it in real time.

Teresa May has appeared in numerous men's magazines including Hustler, Men Only, and Razzle.

Strange that she should take an interest in politics.

I too Ranty. It's an abuse of power in a democracy.

I often wonder how many people know the police, at present, need a warrant to search your computer etc. Because of blogging I do know that but there are many who don't I suspect.

You're right. We need to waken up. Will Scotland stand up about it? I hope so. It would at least show that an independent Scotland will be reasonably fair.

Sent it to someone I knew had the knowledge to interpret it JRB and I await the response.

I haven't read that as yet pa_broon but it wouldn't surprise me. The SNP are beginning to disappoint me on their nannying legislation. All reactive without thorough evidence.

That's exactly my point in your last paragraph.

It's about social engineering Dug camouflaged under the counter-terrorism banner.

No party has protested, only a few individual politicians.

Brian, I read Richard's post this morning. He's usually right. Thanks for the link.

Doug, that's an excellent point. That Act was allowed to sweep through parliament easily and all in the name of protecting us against terrorists.

As I've said before we're creating more terrorists every day since the wars in Iraq and Afghanistan and that I think is why so few protested then.

Now they can close down a website/blog with immediate effect without making evidence available beforehand.

It just gets worse.

I see she's had a facelift, boob job and complete makeover Aangirfan. :)

pa_broon74 said, "Funny how when in opposition they opposed this from Labour but now support it in government."

Im surprised at you not knowing the answer to that, pa broon. You see, the Tories were not the decision makers that matter.They therefor were not as interesting to the lobbyists, the "consultants", the money people or the beezness fraternity. Now they are the government and they have become very interesting indeed to the privateers seeking Westmidden letters of mark. Surely folk aren't that gulible to believe that this will be kept "in house"? Much of it will be "farmed out" and there will be mega loot to be made for the considerations and the obligations, you can be sure of that.
How much of a learning curve do decent folk need to understand certain politicos on the make in Westmidden? Old lot out,new lot in, set up stall, display their wares and it's beezness as usual. Same old, same old sh*** really. They've already sold themselves, now some folk are hell bent on selling us. ....and we will be paying for Westmidden's privilige of doing so. Nothing surer.

Wisnaeme, that's a good point 'they're selling us'. They wouldn't be doing it if there was no money in it for them.

Thanks Joe. I'm scared to check my visitors now. :)

In terms of making money from this. Are they going to issue fixed penalty notices if we look at something lewd and libidinous?

Makes me want to go and live in a cave.

Makes me glad I'm the age I am pa_broon.

They'll find some way to make money from it, believe me. Some private company may be already set up and waiting.