Coming To A Road Near You 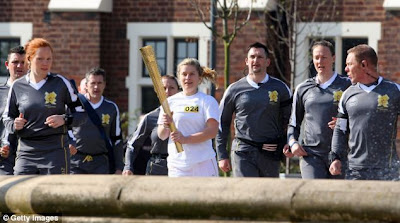 Since it was announced the Olympics Games were to be held in London I've done my very best to ignore its continual promotion. It's not that I'm disinterested in sport, I'm a fan of Andy Murray - well someone has to support him - and have a lifelong interest in rugby, but I find the manner in which the 'elite' are being feted very distasteful.

However it's not only the 'elite' who are being pampered. According to the organisers, the Olympic flame will come within 10 miles of 95% of people in the UK, Isle of Man, Guernsey and Jersey. It's supposedly coming within 10 miles of my home but I won't be clapping from the roadside and have yet to hear of anyone who even knows the torchbearer.

Judging by today's Mail article I doubt if many spectators will see the torchbearer far less the torch. Yesterday the 36 police officers chosen to defend the torch had a dress rehearsal (pictured above). They will be guarding the object on its 70 day journey around the country before the London Games. Often Mail articles can be taken with a large pinch of salt, but the statement 'Yet in case they find the job too traumatic, they are to be given psychological training on how to prepare themselves for being away from home' is so ridiculous it's quite possibly true.

Not only are they being given lessons on how to survive outside their respective home territories but once their two month trip is over they will be offered counselling to help settle back into their day jobs.  They will be part of a wider 70 strong team selected from the Met.

A spokesman for the Met said:

‘We recognise that this is a unique role never performed within British policing.

‘Occupational health specialists within the Met are already developing plans to ensure that the welfare of this team is considered at every stage and the best possible support provided.’

The spokesman said that preparations included ‘talking to them about their career aspirations and encouraging them to plan ahead for when they are away from home’.

Our troops can be away from home for many months a year yet they struggle to find any support for problems they may have when returning home.

It's reported the police could have to deal with saboteurs, protesters and terrorism.  Shouldn't their preparations include training to deal with such incidents instead of ensuring they can cope with blisters and strange bedrooms?  The Met's record for dealing with unusual incidents leaves a lot to be desired.

(I've placed a wee poll in the right hand column).

Carrying the torch around the host country is a new addition to the Olympic farce and is obviously bonkers. Creating extra costs and possible humiliation if it's targeted by nutters.
The MET could have used the torch carrying to improve the fitness of their plumper members but will use their fit young things ( going by your photo).
Will the flame be 'carbon neutral' ?

It's going right down the main road just around the corner from my house.

I'm anticipating a frenzy of paining and road pothole fixing in the weeks leading up to it, plus chaos on the day as they jam up all the roads around the route. It's a main bus route too. What fun!

There I was happily enjoying my morning coffee and hot ‘rowie’ and taking the opportunity to click onto ‘Subrosa’ to read today’s topic – only to find that it had succumbed to the ‘bl**dy’ Olympics.

This Olympic torch is nothing more than a highly expensive publicity stunt.
It will cause untold chaos. The main thoroughfares of the city will be closed to traffic.
Addition police will be on duty to keep the normal traffic flowing along the diverted routes. And at what expense, who pays for all these police?
No one in authority can answer if emergency vehicles if on an 'emergency call' can take the direct route through the city or will they too be obliged to use the convoluted diversions.

And to crown it all, in the evening there is to be a massive fireworks display at which our cash strapped council will literally see thousands of pounds worth of fireworks go up in smoke. I hope those employees made redundant by the council enjoy the display.

Will I be cheering? – Silly question.

All very comprehensive,presumably they will have minders following them around !
One assumes they will be issued with bog roll and be trained in its use?

If such after care is deemed to be required, the possible dangers to the public of being near this "event" raises the question, should it be happening at all, and will Joe and Joline Public be afforded the same consideration?

Apparently it will pass the bottom of my road on its way to Baxter Park. I shall not be going out of the house to see it. It's a bloody flame for heaven's sake. I've seen them before.

Like the other readers I object to the cost and disruption to celebrate what is a London issue. Towns, not countries, are awarded Olympics Games. It's the London Games, not the English Games or the UK Games.

"oh we saw the flame; that makes us feel included, and the fact that all our tax money has been wasted in London now all makes scene. Thank you Lord Sir Sebastian Coe, MBE OBE CBE PC. And thank you Tessa Jowell and David Cameron and Boris Livingston and Ken Johnston. We are lucky little peasants."

Aye RM, I think it will be the young fit adonises.

I believe it's some form of gas flame. Someone will augment the info hopefully.

Auch Julia, at least you'll get the potholes fixed. Suppose it could be worse.

You do ask some questions. :) Who pays for all these police? You and me and a few million others who pay tax.

I haven't looked to see if there are any 'celebrations' locally. Perhaps I ought to see if the council intend to set our money on fire.

I think you ought to have applied to be a torch bearer Tris. You would have received a little pampering along with the Met's best. :)

Then again, you're lovely as you are.

Apogee, did you read in the article that they keep their sun screen in their bum bags? All paid for by us no doubt.

Well, yes, of course I am SR, but a little pampering never did me any harm... :)

With still 3 months to go before the event, motorway signs (within approx 40 mile radius of Londopn venues) are now imploring motorists to "Plan ahead for the Olympics, to avoid disruption".

This is a family-read blog, so I'll just use the acronym.

I am a bit confused about how to vote in your poll, SR.

I shall not be cheering the bauble that is to be paraded in honour of Lod Coe.

But the torch that will ignite the London East End riots of July/August 2012 is another matter.

I think MPs should be obliged to carry the flame through their constituencies.

Were that to happen the sales of eggs and tomatoes (free range and organic of course) would do wonders for the economy.

There's also the possibility we would never see another Olympics in the UK.

It certainly doesn't Tris, but then we appreciate it because it's seldom expected.

Really Joe? Jeez, I can't imagine the disruption to the regular traveller.

Is it 'silly question' which confuses you Barney? It was particularly for those who have little or no appetite for the shenanigans.

Now there's an occasion which I may well attend Crinkly!

Am I just cynical or is there a connection between the hosepipe ban and the Lembit Opik Torch Relay (the other word is copyrighted, trademarked and protected by Acts of Parliament)? A bucket or fire extinguisher is too bulky and conspicuous but a hose can be easily hidden until the right moment :)
That said, I do hope a certain dungaree-clad Dundonian will take the opportunity presented and use his bucket to advantage.

BBC man finds out he will have to pay £200 if he wants to keep his torch and wonders if he can claim that on expenses. Also writes BBC 'stories' highlighting this cost while not making it clear he will be carrying the torch ...

Full time charity man goes in huff when he doesn't get to carry the torch after being told he will be......


Good news story here though. Dundee man who lost legs through illness and has collected thousands for charity will carry torch after recieving new legs...

You are being cynical Brian. :) Well done!

Ah RM, what a super researcher you are. Thanks for going to the trouble to find at least one 'good news' story. Good luck to Ronnie.

The Olympics hasn't interested me for years. Most athletes what I would call professional these days.