The Shame Of PFI 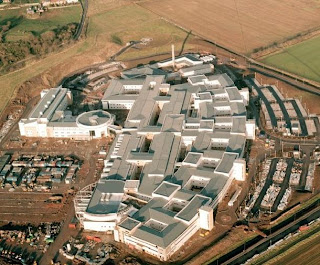 The Royal Infirmary of Edinburgh (pictured) is a major teaching hospital which provides a full range of acute medical services for patients from across Lothian and specialist services for people from across the south east of Scotland. It also provides services from many from as far a field as Perthshire. Quite a few people of my acquaintance owe their lives to the skill of the cardiac unit in RIE and speak highly of the medical and nursing teams.

It is one of Scotland's largest hospitals, cost £190m and was opened in 2003. It was funded, along by schools and other public buildings at that time, by Labour's pet finance system the Private Finance Initiative (PFI).

All governments have to borrow to pay for infrastructure projects, but the shame of Labour's PFI system is that instead of paying up front with borrowed money, it agreed to pay private companies an annual fee to take on the entire construction and management of hospitals and schools.

The contract with Consort, who won the £60m annual PFI contract to build and operate the RIE, is due to run until 2028 but the lease of the land is for 130 years. Consort has been criticised for poor performance since the opening of the hospital and the latest incidents have sparked NHS Lothian into consulting their lawyers.

I've never totally understood Labour's PFI contracts. I see PRI as like purchasing a car on credit, with the condition that only the credit company employees can drive it and maintain it at excessive cost to the purchaser. That's the shame of PFI contracts.

Murdo Fraser, the tory MSP for Mid Scotland and Fife, thinks 'it would be wrong to use this one incident to try to damn all PFI projects and that many have an excellent record of delivery. Publicly-funded institutions are not without problems as we have seen in the all too recent past such as at the Vale of Leven hospital'.

I agree publicly funded projects may have problems, but the difference is the people feel they 'own' these buildings. With PFI there is no sense of public ownership.

According to the Scottish Government website there are currently 31 projects funded by PPP/PFI and NPD finance systems at a cost to the public purse of £1.332 billion, totaling 21% of capital value. No detail is given on contract lengths or values.

Fortunately the current Scottish Government have decided to use a Non-Profit Distributing (NPD) finance system for future projects because they quickly saw the exorbitant overall costs of the PFI system, but that is little comfort to the taxpayer who will be paying for projects like the ERI most of their working lives.

Let's hope Lothian NHS's lawyers can find some loophole in Consort's contract to allow them to either cancel it or renegotiate it to ensure that patient safety is paramount and value for money is also considered.
Tweet
Posted by subrosa at 09:14

One of the major problems with the Civil Service is that it has no real contracts negotiators.
They tend to go out to tender, assuming that the tenderers will bid their lowest price, and then take the lowest on the basis that it must be the best buy.
In practice, the tenderers spend more time considering what their rivals are likely to bid and merely endeavour to undercut them, not give the lowest possible price.
Many major companies rent their premises from developers on a similar basis to pfi, but they know what they are doing, the Civil Service doesn't. It simply does not employ the necessary specialists to ensure that they get value for money. They have the naive belief that a Civil Servant can fill any post in the service that is graded at his level, and it is not uncommon for someone to be given a post which is totally outside their area of expertise.

The SNP bought out Labour's Skye bridge PFI contract and most of Labour's hospital car park PFI contracts in order to scrap the charges so it is possible.
Labour's Dundee Ninewells Hospital PFI car park contract was a contract too far though and would cost too much to buy out.
Labour's attack on the sick in Dundee won't be forgotten.

I remember when labour was bringing in these PFI schemes, Alex Salmond, then just an MP in London, spoke out against them in the strongest terms.

I seem to remember, RMc, that that was the story with Ninewells. Other hospitals in Dundee have free parking (King'Cross and Royal Victoria, but the Ninewells Contract was too difficult/expensive to get out of.

It's such a shame for people without much money to spare that if they have a relative in hospital they either have to manage the exorbitant bus fares en famille to get to the hospital, or pay heavy charges, just to visit.

On the former, the biggest problem are two (usually more) different bureaucracies to work through, they don't communicate very well if at all. Other problems include things like (as in where I was) people who were NHS employees having their jobs usurped by a huge corporate giant. There was also issues with accountability, the potential for buck-passing was huge and of course the biggy: Cost.

On the latter, while I can't speak for Scottish Government, the Scottish NHS is now well placed for contract negotiation. When I started it was shocking, we had different people doing such similar jobs it was hard to know who to go to with questions. That doesn't happen any more, ther is no money for spare staff, we've been cut to the bone.

In terms of equipping (where I work) I would say we usually get a decent balance between economy and practicality, we don't always accept the lowest quotes.

Of course the usual caveat applies, nobody is perfect nd mistakes are made.

One other thing I noticed with PFI, it seems to take many of the bad things from the public and private sectors. The private sector should be more efficient having as it does profit in mind, that might be the case if the contracts weren't so air tight that they can (almost literally) get away with murder once its signed. From the public sector it takes the creaking bureaucracy, faceless customer services and the monopoly it has in the area its operating.

When you put it all together, its not a good mix at all. It reminds me of a line in a Dilbert cartoon: paraphrasing: NHS Trusts with PFI are 'in a position of direct responsibility but oblique control'.

Heather..
Go on. Tell us all this secret question ;) We won't tell anyone honest.
Or you can e mail SR using the address at the top right of the screen.

The maintenance costs arising from PFI contracts look high - they ARE high, let's be honest; but they are perfectly fair given what's asked for in terms of service and performance.

The service terms set were very often blue-sky ideals which would never ever have been delivered by the Public Sector (who basically spend nothing on maintenance and let everything fall to pieces.

The people who set these contracts up have no clue about risk management, no idea about service levels, no thought for what's reasonable. You ask for the moon, your private sector contractor works out what the moon costs, and charges accordingly. If he doesn't, he goes out of business.

Don't blame the service providers, blame the idiots who asked for, and agreed, these things in the first place - ie, politicians.

PFIs were Labours way of 'getting Jam today' at the expense of your & my grandchildren.

Isn't it shameful that we don't have contract negotiators though EP?

Very true RM and it wasn't only the cost for Ninewells but the land was involved I believe.

Just the other afternoon I visited someone in Ninewells Tris and I saw more traffic wardens than cars in the lowest car park.

Pa_broon, that's most interesting to hear that things are certainly improving.

Sadly with PFI I witnessed a few excellent small businesses go to the wall because they couldn't cope with the bureaucracy.

RM, I've deleted her comment because I think it's spam. If she wanted to ask a question she could have easily emailed me.

I do blame it on politicians WY and not the businesses. Any business will try to get the best deal they can if they want to survive.

But politicians should ensure suitably qualified staff are in place to handle their new policies. By all accounts (see pa_broon's comment) this doesn't happen.


Labour's £260Bn PFI costs would have been £60Bn if we'd borrowed and paid for the work ourselves.

Most building work below reasonable standard according to Architects.

Private companies based offshore and don't even pay tax.

SR. Those spammers are getting more clever :)

I am told that to get any big contract you have to be a freemason.

That's not the first time I've heard that Aangirfan. A couple of small businesses which were 'ineligble' to apply for a PFI contract mentioned it some years ago.

Labour decided both the banks and PFI were too big to fail.

Scotland has in the region of 95 ongoing PFI projects all initiated pre May 2007 at a construction cost of circa £1 billion with leasing costs and maintenance service contracts costing between £400 - £600 million per year and generating profits in the range of 15 - 20%.

The terms, costs and profits associated with these contracts are odious and need to be challenged, re-negotiated and preferably bought out.

There has been an effort by the Scottish Government to renegotiate the PFI hospitals' contracts Crinkly but with only a little success.