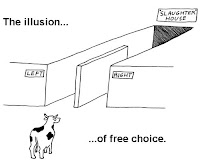 I was asked by Junican if I would consider publishing the following post. My reason for consenting is not because I am a smoker but because, since the smoking ban, I have seen other organisations slowly feed their prejudices into the public arena with little dissent from politicians. Although I hope to be a non-smoker before my next birthday (for various reasons), I defend the right of anyone to choose whether to smoke, drink or eat chips. These actions are, as far as I'm aware, still legal in this country. (Let's not forget smoking is permitted in various parts of the Palace of Westminster).
I know that Subrosa has readers who have been concerned, if not horrified, about the smoking ban. Freedom-loving people most certainly should be concerned. There are many things to be concerned about. First, there was the Labour Party’s manifesto promise not to include pubs etc and private clubs in the proposed anti-smoking legislation; then there was the last minute change to the Bill by an amendment proposed by the Government itself; and then there was clever trick of bringing the Bill to the Lords just before Christmas when many Lords were away.
But those are just Parliamentary tricks. A more serious trick was the redefinition of ‘private property’. The Smoking Ban law introduced the idea that, if you own a pub outright, the mere fact that the public can use it, even though they have no financial stake in it, means that they (as a ‘body’) can dictate to the owner what he can allow to happen on his private property - bear in mind that enjoying tobacco is not, in itself, a criminal act. Also, that the owner of such a private/public property must act as an enforcer under very severe penalties.
In the past few years, the likes of ASH et al have had a free run. They have planned far in advance and their plans have been, and continue to be, effected with the willing, if thoughtless, cooperation of politicians and the media. Some politicians and some people in the media are beginning to see the errors of their ways. They are beginning to see what a beast they have released. Imagine a situation where ALL the newspapers of Scotland were against Independence and described the Scottish people who are in favour of Independence as “Disgusting, filthy, stinking traitors who should be shot”.
There are many blogs on the internet which refuse to accept this de facto dictatorship and will continue to do so but they are disjointed and disorganised. In general, this is a good thing in that they do not present a specific target which ASH et al can berate, using their massive resources. However, a limited amount of organisation is desirable.
At the Bolton Smokers Club, I have voluntarily started a list of constituents with the intention, over time, of having at least one person per constituency who is able and willing to write ‘proper’ letters to his/her MP. The more per constituency, the better, but the important thought is to be widespread.
I do not envisage ‘onerous’ duties. I would simply suggest ideas that members of the group might write to their MPs about. For example, how many people know about The McTear Case? In the early 1990s, ASH persuaded a Mr McTear to sue Imperial Tobacco for damages on the grounds that he suffered lung cancer as a result of smoking. Cutting a long story short, in 2005, the Judge, Lord Nimmo Smith, dismissed all the claims, on the grounds that nothing could be proved, even only on the balance of probabilities.
How many people know about that case? How many MPs know about that case? Very few I should imagine. Also, how many people know about the machinations of the World Health Organisation to get smoking bans enacted? The more that one looks into the matter of smoking bans and such, the more horrific, from a democratic freedom point of view, the situation becomes.
All I am asking is that people, if they are interested in helping defend our freedom, let me know their constituencies. That is all. There is no political aspiration. A person can simply give me a nickname (such as ‘Subrosa’!) and their constituency. I also get the email address of that person, but I do not get the ‘real name’ of that person. The email addresses are kept separate from the list of people. From time to time I shall email the people on the list with suggestions - that is all. Whether people act or not is entirely up to them.
I believe that the key to blocking the erosion of our freedoms lies with our MPs. They must be awakened. They must see how they are being manipulated by a few Holy Zealots who have many paid operatives.
If you, dear reader, want to help, and if you are willing to write a letter to your MP occasionally, then let me know your name (nickname) and your constituency. You can do so by googling Bolton Smokers Club, but here is the URL:
http://boltonsmokersclub.wordpress.com/
Whatever subject I might be talking about, just leave a comment stating your constituency and your name/nickname. There is nothing to be lost and, possibly, much to be gained.
It is not just about the enjoyment of tobacco. It is about any and every attempt to limit our freedom to live as we wish.
We can only know the possibilities if we try.
Whatever you decide, I am grateful for your consideration.
James Watson (aka Junican).
Tweet
Posted by subrosa at 07:36

I gave up smoking seven years ago, after 30 years at it. However, there are times when I fancy taking it up again, if only to blow smoke into the faces of the anti-smoking fanatics.

Technically I died that evening.

But thanks to the skill and professionalism of the doctors and nurses I am still here today. Though to get through each day now requires a mountain of pharmaceuticals and I have to fight and wheeze for every breath I take.

In the grand scheme of things, smoking is just another habit, like picking your nose or scratching your arse.

Given the choice of having one more fag or wakening tomorrow – I know which I will choose – I hope you never have to make that choice as you indulge your habit.

I use an e-cigarette to do that Elby. The worst fanatics I find are those who have recently given up. I doubt the temptation ever leaves you.

It is just another habit JRB and one I regret. I hope I never have to make the choice too and I admire the strength you show to cope with your disability.

Whether your medical knowledge helps you I wouldn't know but I'm sure you have gained much respect from other medical professionals.

As I said the reason I published Junican's post was because I don't see the smoking ban as being a one-off. I see it as just the beginning of an unnecessary intrusion on people's lives.