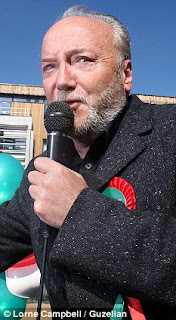 George Galloway has won the Bradford West by-election by more than a 10,000 majority from Labour, on a swing of 36.59%.
Three tweets, which possibly sum up public opinion, caught my attention, but will they catch the eye of Ed Miliband?
Quite probably Ed has convinced himself that it's only the Scottish branch of his party which is in disarray, but this morning he'll have to admit the throughout the whole organisation or face another leadership challenge. His brother's phone will be engaged no doubt.
If you're interested here is a video in which George Galloway shows a few of his true colours.
Mike Smithson ‏ @MikeSmithsonOGH

Looking at the numbers & the records Galloway's victory in Bradford West is the most sensational by election result of modern times.


Hugh Hunter ‏ @Gabicabi
George Galloway is the Marmite of politicians. I don't agree with him on many
issues-eg.his Unionist stance, but I don't doubt his integrity.
Tweet
Posted by subrosa at 09:36

As stated, Galloway is a wee bit swivel-eyed but he can certainly shake things up.

Much as though I cannot agree with all of George Galloway’s arguments, he comes as a welcome breath of spring air into the political arena.

Our mainstream political parties have all become indistinguishable one from another, far removed from the thoughts, aspirations and concerns of the common man.
The parties are all arrogantly self-centred and myopically living within a very narrow and restricted Westminster bubble.

Perhaps George’s victory might just give them the necessary wake up call, for if nothing else Mr Galloway listens to the concerns of the people, communicates with them as equals and vocalises their concerns.

Good luck to him.

The fact that Galloway was allowed to stand as an MP in a Parliamentary constituency in England is a good argument for independence for Scotland. As in independent Scot the English could have declared him persona-non-grata. Not that I would insist in him bothering you north of the border of course, I'm sure he would be welcome in the Gaza Strip

Yes, the Galloway victory was Labour's fault, however the cause of route was not Miliband's leadership, or lack of. It was a direct result of Labour's immigration policies that Bradford West to become a majority Muslim ghetto, many of whom share Galloway's professed anti-Israeli, post-Palestinian view.

I may not agree with much of Galloway's policies & actions, but he sure gets respect for this:-

He supported the CIA's Arab Spring!

For those of us who were getting bored,"Happy days are here again".
Don't agree with all he says but he has an interesting way of saying it.

Galloway is a pure chancer & many of us remember him from the Dundee Labour Club scandal & the War on Want fiasco.

I don't care. As an anti-war orator he has no equal & I want his voice in the House of Commons.

I'm sure he'll shake up many back benchers pa_broon. All to the good I say.

I noticed Labour etc had their chief organisers such as Harman, out yesterday attempting a damage limitation exercise JRB. Quite amusing.

It'll be interesting to see how he performs in Westminster Sean.

Now that he no longer has his radio talkshow, he'll be able to dedicate more time to his new role.

Aangirfan, you would know more about that than me.:)

He surely does Apogee.

Aye Observer, he makes sure he's never out of the limelight one way or another. :)

Rosie,
He's a welcome change from all the identical anodyne suits in all Parliaments that are picked to be PR acceptable. He's a marmite politician that stands out from the supermarket own brand containers of milk.
I'm glad he's won as he's exposed the cosy, complacent, unrepresentative, out of touch cliqueyness of politics. Things must change from the people upwards for the benefit of the people when idiots (I am being kind) like Maude are allowed to spout stupidity careless of their audience.
Rant over.

Appreciate your rant Brian and yes, I have a sneaking respect for the man - and not because he's a Dundonian. :)