An Engineering Experiment Too Far 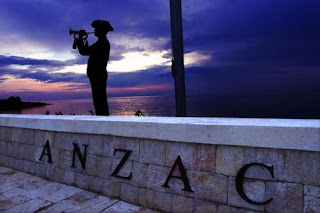 Australians will be marking ANZAC day on Wednesday 25 April and plans are being prepared for the centenary celebrations in 2015.

While the Australian Labor party continues its meltdown, politics has continued and within hours of the Queensland result a Perth newspaper reported that the Federal Coalition 'has been warned that celebrating the centenary of Anzac Day could provoke division in multicultural Australia - and that there are 'risks' in honouring our fallen soldiers'.

Almost $370,000 of taxpayer's money was spent on focus group testing and a research paper used by the Government to guide commemoration plans, which list multiculturalism under 'risks and issues' to avoid 'unexpected negative complications'.


"While the 100th anniversaries are thought to provide some opportunity for creating a greater sense of unity, it is also recognised as a potential area of divisiveness."
It's very obvious from the 390 comments that Australians are angry - not only about the expense but politicians interference in the day they remember their fallen.

Some say it's political correctness taken a step too far. I no longer believe in political correctness. It should be given its 'politically correct' name - social engineering, because that's what it is.  Social engineering has its place in societies but when it's manipulated by governments as a process of deceiving people into giving away the culture and customs, it is dangerous.

The film Wag The Dog is an excellent example of the dark side of social engineering methods being employed by politicians.

Usually governments are quite subtle in methods of changing systems but this utterly tactless, expensive report from the Australian government and motivated by moralists in government, will possibly bring about the demise of the Labor and Green parties.

Considering altering the way in which populations honour their fallen is an experiment too far. These remembrance days should not involve politics at all, as they are planned and organised by veteran associations such as the Royal British Legion, who raise their funds from public donations and not from 100% government grants.

I trust the UK government will take note of the responses of many Australians to this 'experiment'. 'Leave well alone' springs to mind.
Tweet
Posted by subrosa at 09:25

How about suggesting that those people who feel "uncomfortable" about celebrating ANZAC Day leave Australia for a day in order to reconsider whether they are Australians with all the obligations that entail or just freeloading tourists with no idea of mateship?
And if that works, we'll try it in England and claim we thought of it first ;)

Now there's an idea Brian. I'm sure you noticed that many commenters at the paper suggested similar but for a more lengthy period of time.

Not really to the point but a couple of related reminiscences of Gallipoli came to mind.

I heard an old Australian soldier telling of the experience of landing. It surprised him that the ship's boats (no landing craft) were commanded by midshipmen in their very early teens - just as they would have been in Nelson's day. The boat he was in hit a snag and the Major stood up and started to issue orders, only to be rebuked by the Midshipman "Sit down, Sir! I command here" - which, of course, amused the Diggers no end. "Good on yer, kid!"they shouted. There was a scandal about the "war babies" later and the youngsters were withdrawn from active service - much against the published wishes of their mothers who said that their boys wanted to stay with their shipmates.

I was looking up a few biographical details of Clement Attlee, the 1945 Labour Prime Minister, and found that, as Major Attlee, he was the second to last allied soldier off Gallipoli. The last was General Maude. Attlee always maintained that Churchill's idea of the landings had been sound but that the forces available were insufficient.

Australia has had "New Australians" arriving on her shores in quantity since just after the 2nd world war.
People from all over continental Europe,Germans,Italians,Poles,Yugoslavs,Russians,and Chinese,and others have in the main been happily assimilated into Australian life and culture.
Yes, many missed their friends and relations, but many convinced the friends and relations to come and join them and most were living far better lives than they were where they came from. Some returned to their homelands, but usually after they had made enough to retire on,in relative wealth. Some were homesick, but many who did, were back again when they realised anew why they were out there in the first place.
From what I have heard, most of the problems started after the immigration regulations were relaxed and there was immigration from the middle east and far east.
Most of the problems were the same as we have had here in the last ten-fifteen years and from a small grouping which will not assimilate, they want to take over , sound familiar? And of course problems caused by the "politically correct" members of the left wing labor party.They are the only people crass enough to try to change observance of ANZAC Day. Most Australians ,new and old understand and accept what the day means.Without the ANZAC's ,there
would probably be no Australia as we know it, and things here might be a bit different as well!!

Indeed Apogee, things here may be difference and not just a bit.

I didn't forget RM, but this was an Australian government report and not one bought by the New Zealand government. :)

Rosie,
I'm looking forward to Michele's comments on this topic as she's a Digger. Hopefully, she'll use another bit of innocent Strine that makes me blush ;)

Me too Brian. She does read here regularly so I'm sure she'll contribute.