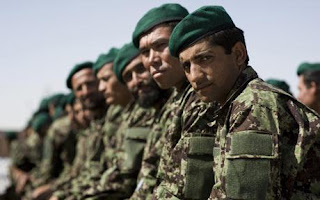 Members of the Afghan National Army
Two British military personnel, were shot dead by Afghan security forces yesterday. Later a NATO soldier - his nationality has not yet been disclosed - was shot dead at a checkpoint by a 'rogue' policeman. A total of 407 British troops have now lost their lives in this war.

The two British men were a soldier from the Adjutant General's Corp and a Royal Marine.  They were killed at point-blank range at the British base in Lashkar Gar in Helmand province.  The Lashkar Gah base is home to most senior British commanders and Foreign Office officials in Afghanistan and mainly houses British servicemen and women, although there are also some Americans based there.

The gunman was from the eastern Nangarhar Province and had been in the Afghan National Army for four years according to Ghulam Farooq Parwani, deputy commander of the ANA.

To find an accurate account of the incident is difficult, but it would seem the troops were taken by surprise when the gunman stepped out of a truck during the morning and approached the main gate holding his M16 assault rifle.  They shouted that he could not carry the weapon into the base and he replied saying he was there to escort a Kabul delegation.  He then continued his approach and opened fire on the men, killing two and injuring a third.  Coalition troops who saw what happened then immediately shot the gunman. An American soldier was also shot dead yesterday in a similar attack by an Afghan policeman in the east of the country.

Fifteen NATO troops have been killed by their Afghan allies in the first three months of 2012 - one in six of all coalition dead and 70 members of the NATO forces have been killed in 42 insider attacks from May 2007 until the end of 2011.

Richard North says 'we [the west] lost years ago' but I say the west lost as soon as it decided to interfere in the culture and politics of Afghanistan. This war was unwinnable and therefore the obvious outcome is defeat.

Should we continue with our planned timetable for withdrawal?  No.  Dr Karl Sandstrom, an expert on Afghanistan, states the increasingly unstable situation will eventually make training impossible to maintain. He continues:


The insurgents do not need to inflict mass casualties. It would seem that when the Taleban stated that the westerners may have the watches but they had the time, their projections were far more accurate than the ones produced by think-tanks and politicians.
I agree. The difficulty now is Pakistan are no longer co-operative so the exit route will have to be through Uzbekistan. Negotiations with Tashkent are slow. Our troops are trapped and the insurgents know it.

The Daily Telegraph said that the soldier was an Afghan Army officer who took umbrage at being told his men couldn't get onto the base to greet their friends who were flying into the base. But who knows. The truth will never emerge. I notice that the culprits are now called ' someone in an Afghan soldier/ police uniform '. This is probably to hint that it's not a real soldier or policeman until they have to admit that it is.

An exclusion zone around the Elgin platform with an abandoned rig leaking gas and The Scotsman tells us about a panda having colic. Lol.
Nothing on the Herald online paper front page either but maybe if I dug deeper I'd find something.

It is with great despair I watch the same old political rubbish from Whitehall and Westminster spouting the worn, tired and blatant lies as to Afghanistan. All That Boy in number 10 needs is a Snotty Gordon transplant.Every bit as clueless as his unelected predecessor.

I suppose the glorious weather will have been determined over an expensive dinner in Number 10.

Am I right that the policy with regard to equipment a few years ago was to thrash most of the vehicles into the ground (it takesabout three months in Afghanistan before a major depot level overhaul is needed) and donate what is left working to the Afghan National Army?
Let's get out now to enable our Armed Forces to recover to a sustainable tempo of trainin and deployment. Ideally they would reinforce the Border Agency in securing our homeland borders and deporting the backlog of illegal immigrants to allow the fight against extremism a better chance of success.
Naturally a vacuum will be created in Afghanistan, but resolving the problem must be left to India, the regional superpower, as its anti-Pakistani machinations have exacerbated the insecurity in the area.

RM, there are lots of accounts around but it's nearly certain the man, in ANA uniform, approached the guard at the main gate carrying a gun. Some reports say he'd said he was there to escort VIPs who were visiting, but you're right, we'll never know the truth.

Aye, I heard that RM. I've been offline because had to clear the study here to give it a lick of emulsion so I'd no access to the computer until now.

It's becoming irritating to hear the platitudes from politicians now OR.

I heard that too Brian, but it's the arms which are causing the problems I think.

There won't be a vacuum for long in Afghanistan because a civil war will start. The Taliban will want to get back to 'normal' asap.