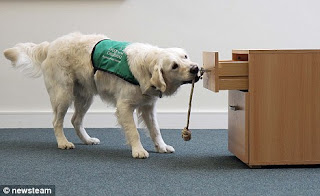 Even if you're not a 'doggie' person, the intelligence of some breeds must be applauded.

We all know about Guide Dogs for the Blind and the recent innovative project of Hearing Dogs for the Deaf, but now these clever animals are being trained to help care for people suffering from dementia live independently for longer.

The breeds currently involved are the reliable retrievers and labradors.

The government has given £52,000 to the project but Dementia Dogs requires to raise a further £130,00 to launch a pilot scheme later this year.

That sum of money is quite probably what the government-funded Olympic committee may pay to entertain just one of their VIP's entertainment during the London Games.

Oh Subrosa, Subrosa – why did you have to go and spoil it? :)

I read the title of today’s piece and the first couple of paragraphs and already my mind was drifting, thinking of the lifetime of happiness that animals had brought. Of the pleasure, companionship and yes love that generations of cats and dogs have given. They are without question man's best friend.

… Then you go and spoil it by mentioning the bl**dy Olympics. That obscene, overly-indulgent, overly-expensive, London-centric display of pure selfish hedonism, which will be about as far removed from the true Olympic spirit as you can get.

… I’m off to take the dog for a walk and soon my normal tranquillity will be restored. :)

Spot on from JRB. Not for nothing is my avatar our Dobie!

I love dogs, but cats are animals! Can't stand them.

My dogs occasionally drive me to demention, like when they try to get at the window cleaner *through* the window.
And I won't even mention nextdoors guinea pigs.
I mean guinea pig.

JRB, right on. The only benefit of this five ringed circus will be to a small part of Londonistan. I try not to think of the final cost to the Nation but we will be poorer than we thought. About as much benefit as Edinburgh's trams.
Taking the dogs for a walk is a good way to get peace and relaxation, this project seems a good idea but who is responsible for the welfare of the dogs? I do wonder if this is fully thought through?
As for the cost, that would hardly keep one politician in allowances for a year, but what do you expect.

I know one labrador who would be able to remind me to have a meal at least a dozen times a day, bless her.
As for Apogee's concern about the welfare of the dogs, Guide Dogs are regularly inspected to ensure they are being well cared for.

The Dementia Dogs may well be dogs that have been found to be unsuitable for the particular demands of guiding or other assistance as the lab of whom I speak was washed out of guide dog training and rejected as a Deaf dog - given the substantial cost of breeding, training and keeping Guide Dogs, every attempt is made to find an assistance niche for them.

JRB, my sincere apologies for disturbing your blood pressure. It wasn't intentional.

I continue to try my best to write a post about the Olympics but still doubt if I could be reasonably objective. :)

Lovely avatar OR. I was hearing today that the one recently acquired in my family is adorable, even though she insists upon chewing everything in sight. In a couple of weeks I have the privilege of looking after her for a week.

Was the plural a type Conan or perhaps something more meaningful? ;)

The welfare of the dogs will be monitored in the same way as the other help dogs I should think Apogee.

These dogs are for folk in the early stages of dementia who have been judged to be able to live independently.

Brian, you are possibly right there. I've a friend who 'walks' guide dogs and she says the ones who don't quite make it are put to other uses. The training isn't cheap as you know.

I remember that post Conan. You put my worst fears at rest though. :)