Did Cameron Succeed In Changing Minds? 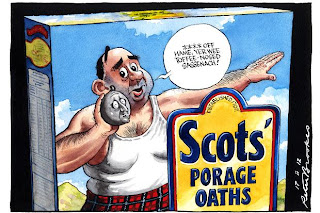 Peter Brookes (The Times)
click to enlarge
He came, he saw and he did his best to appeal to the emotions of the Scots.  Did he succeed?

He pointed out that when Glasgow airport came under attack the UK was able to pursue those responsible using the reach and influence of a major power. Surely, if Scotland were independent, the other countries in the UK would offer assistance if there was a terrorist attack in Scotland? I'd also expect Scotland to help the remainder of the UK should a similar incident happened there.

How would we support our banks? How would an independent Scotland police its borders? How will Scotland pay for its share of the defence of the British Isles, including its nuclear deterrent and where would that deterrent be based? As the Prime Minister I would have thought he knew the answer to the last question.

He played on the fact that if Scots had family living elsewhere in the UK they would become foreigners. That is the most pathetic nonsense I've heard in the debate so far, but the unionists continue to wheel it out with frightening regularity. Ask any Englishman if he thinks Scotland is his home and he'll say no. We are separate nations and cultures and my cultural home is Scotland.

Nevertheless, he then tried the bribery angle with "vote NO and I'll give you more powers". In fact he did not say that, he said he wanted to look at "what further powers could be devolved" but those powers could be considered only if and when independence was rejected by voters.  We've been here before in 1979 and, although Alex Salmond insisted last night that David Cameron's new offer needed meat on the bones, I wouldn't be considering buying any of it.

Yesterday was about positioning and I would say Alex Salmond won the day. If he hadn't - particularly when he was on home ground - there would have been many more questions asked.  Will he give serious consideration to a tory PM's offer to look at further powers if the electorate vote NO?  I hae ma doots.

If I were a unionist I would have felt some pity for David Cameron yesterday. He stood alone pleading the case for the Union while other unionist parties stay silent. 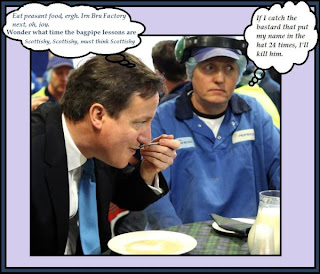 click to enlarge
Did he succeed in changing minds?  Perhaps for a few tory voters yes, but to the majority in Scotland a Tory PM's visit is a non-event, no matter how hard the MSM try to display it as a grand occasion.

Many thanks to @Weegiewarbler for the picture.
Tweet
Posted by subrosa at 09:16

Surely, if Scotland were independent, the other countries in the UK would offer assistance if there was a terrorist attack in Scotland?

I'd be in favour of it, but considering how our courts have frustrated attempts to extradite Abu Qatada back to Jordan to face trial, it would be wise to note that support is not as automatic as one would hope.

My name is David, but you can call me Mr Cameron. I come from a big city far, far away.
I have come here with one simple message for all you Scotch people, to tell you that that naughty Mr Samon wants to take you out of England – sorry – the United Kingdom. And the he is going to hold a referendum, to which you must all say No – or else I’ll set Michael Moore and the LibDems on you!

… Has anyone ever heard such sanctimonious claptrap.

Sadly that's true WoaR. So there would be little difference if we were independent.

Oh JRB, together with the cartoons, you've made my day. :)

"Vote NO and I'll give you more powers"

It's hard to see how Cameron can lose with that strategy, Subrosa - the vote will take place near the fag end of parliament and he'll therefore have no time to deliver before the GE.

After the GE, assuming the cad got in again, he might conceivably claim that he had no mandate for it or some such. He no doubt has a list of rejoinders, as we speak.

Seems once again all that is on offer is crumbs from the Westminster table, why anyone would fall for this condescending behaviour is beyond me.

The only logic I can find in this is desperation.

Why did he bother coming up to Scotland?

This is the same song we have heard for 300 years.In England they want out of the EU after only 35 years.
Have they not made the connection yet? What do they not understand?

Exactly Fausty. It's all smoke and mirrors and I doubt if many fell for it.

He didn't sound desperate to me Sandy, just kind of bored. He lacked any real enthusiasm and that was obvious by the way he hadn't rehearsed his speech. Cameron is usually good at not having to look to his notes when speaking.

why if mr cameron is so keen on england remaining in a union is he so keen on falling out with the e.u.? is it because he's not the big boy in europe?

Cameron thinks, "I see what Plum Wodehouse meant when he wrote "It is never difficult to distinguish between a Scotsman with a grievance and a ray of sunshine" so I won't try to break the ice with Samuel Johnson's quip about oats. I wonder if he's a Celtic or Rangers supporter?"

William C Wallace thinks, "How dare they serve that Sassenach a bigger bowl of porridge before me? If the porridge is made in Scotland it's all mine, by rights - we share things, not like the English."

Seriously, that chap didn't do the Scottish tourism industry any good, almost as much a bad attitude as the waitress at the Ferry Boat Inn, Uig who told me after I requested that the tomato be omitted from my cooked breakfast "You'll get what's on the menu." Why couldn't they have put nice people next to the Prime Minister out of simple politeness? Was Brown ever treated so rudely by English people?

Whether Cameron convinced anyone, time will tell. But he did pose a number of serious questions which I expect sensible Scottish voters will want answered before a referendum.
Art the same time I hope Scotland becomes independent as it is the only way we are likely to have an independent England with no need to continue to appease the Scots

Cameron's idea of 'further devolution' is Calman and the Scotland Bill.

This visit and the speech in terms of support for the status quo will have done nothing. A bit like a dog when it stands up, turns several times on the spot to trample down the imagined grass only to sit in exactly the same spot.

Someone said on the radio this morning Cameron is basically infantilizing the Scottish electorate by offering treats in the future for good behaviour now.

I'm also beginning to think he knows independence is now going to happen, he's just going through the motions. What I'm not sure about is how kicky & screamy Westminster is going to get during the process.

I fear it'll be messy.

Hi SR,Point taken. I think Cameron gets it, as inevitable, but there are 50 or about , labour MP's who are now starting to realise they are heading for the job centre when it happens who will do their best to stop it ever happening.
But I would not bet on a permanent conservative government in England.
Oppositions don't win elections, governments lose them.Remember the SNP were not supposed to get an overall majority in Scotland, ever !

It was a non event in England too, lot of us are getting pretty sick of Cameron offering vague added devolutionary powers to Scotland that he denies us. A lot of us are wondering why the Prime Minister of the UK went with begging bowl in hand as a supplicant to Scotland as well, after all when was the last time he asked us what we wanted?

@footdee: Apart from Jeremy Clarkson's cyclops comment, everything was deserved. I read about Gillian Duffy, Jacqui Janes and the 10 Downing Street victims of his rants and mobile throwing. But I can't recall an occasion where he was treated with such bad manners on a visit - mind you if he'd visited my JobCentre before demanding Civil Service redundancies, I'd have given him that same look of contempt, but with good reason.
Fact is that many English people agree with Scottish independence simply to prevent Brown and his ilk ever having the chance to ruin England again. And for an end to the constant griping and special pleading when even the West Midlands has a larger population but much less public spending.

'Surely, if Scotland were independent, the other countries in the UK would offer assistance if there was a terrorist attack in Scotland?'

Gedguy suggests that that no one would attack Scotland as it wouldn't get involved in so-called illegal wars. As far as I am aware, Switzerland has not been involved in any wars for centuries, but they have had terror attacks, as has Norway, another neutral country. You are correct in believing that no other country would attack Scotland, they will have seen the problems that it has given England

Don't you think it was perhaps a sudden decision that the particular person was put next to the PM?

I admit they could have chosen a less nervous type.

Neither of us want vague QM, we both want committed. I can't understand why England, with such a large population which feels aggrieved in some way, can't get their act together and push the current bunch(es) of pretenders.

I'd like to think we'd be a utopia Gedguy, but attacks on countries happen for a variety of reasons.

He hardly managed to say one word that wasn't patronising pap, or downright wrong.

If we hadn't been poking our noses into people's affairs on the other side of the world maybe there wouldn't have been any terrorist attacks.

And he makes it sound like some big deal that the security services came to help. We help pay for the damned people in London; we help heat their offices and provide their pensions...why the hell would they not help, and does Cameron think we are too stupid to manage intelligence work ourselves.


I wouldn't believe that man if he told me that my arse was on fire and I could feel the heat and see the flames.