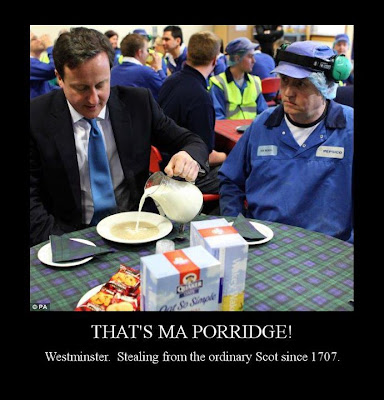 SR: There are some in England who hope he choked on it later!

I wonder if the poor Quaker Oats employee is wearing those ear defenders to shut out the noise Cameron is making.

Rosie,
Taking a closer look at the photo, I don't think "she" wouldn't have a grey shaving shadow on her throat - or do Quaker porridge oats put hairs on one? I have Tesco Value porridge every morning but my hairline keeps thinning and receding.

OK Brian, I apologise to JRB and your good self. In the first picture I though 'he' looked female however 'she's' rather too flat chested perhaps?

Brian, you can't beat Scots for porridge. No comparison with Tesco's value, unless it's to do with hairlines. ;)

Rosie,
Scott's or Quaker's? Didn't they merge? Perhaps my creamy Tesco porridge doesn't taste the same as porage because I don't use a spurtle to stir it or a horn spoon to eat it with. I mix it with oatbran and bran flakes, add milk and microwave it, or sometimes have it cold. Yummy either way.
Anyway, why wasn't Rory McCann there in Cupar wearing vest and kilt?

Brian, I've never managed well with a spurtle. I use a wooden spoon. Soak the oats overnight in water then cook them on the stove, adding only water.

If you want salt then add it at the very end because it toughens the oats.

No need for mile because it's creamy that way and only takes 3 minutes due to the overnight soaking.

Sells for £4 a plate including toast and marmalade. :)