Are We About To Repeat History? 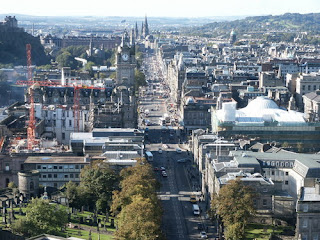 I was spending a wee bit of time reading Hazel Lewry's blog specifically about the Treaty of Union. Very interesting and I get the impression that she is well clued up.  In my opinion it confirms what I have always felt, if we wanted to, we could just walk away from the whole thing.  Seems Ireland never paid any money way back into the coffers and considering what Scotland paid the treasury in oil revenue, why should we pay anything?  Anyone reading the McCrone report realises we were and are still being lied to, and when they (westmonster) talk about the rule of law, they mean their law, English law. In Scots law the people are the law, not parliament.
I wonder, having watched Cameron in the last couple of months, he has realised this is in fact the situation and has decided to let the cards fall as they may, could be the least messy solution to a lot of problems, he should be in the position of knowing the real financial position, If he doesnt, if he is being lied to, there will have to be a big clearout of traitors, because that is what they are.
But a treaty can be walked away from by either party, that's the way treaties work, so how is the EU "treaties" so unbreakable,  Where did the idea come from that EU law is above international law, wishful thinking and disinformation from the EU. That can be the only answer, and as an independent country, we are surely, as a sovereign country, within our rights to ignore all EU laws except those that apply to trade that we wish to take note of.
We decide who enters our country, and has residence, not the commissars of a fascist state.
Time this whole constitutional business saw the light of day, and an honest debate was had. If we did walk away, whose army are the going to send in? The English, a third to a half are probably Scots. The Germans? no one would put up with that. The Kermits? aye right. But remember that the EU is building, slowly but surely, a supranational 'police' force which can go into ANY EU country without asking permission first. I understand from reports that it numbers about 1800 and is armed.


It has been hinted that the amalgamation of Scottish police forces may well have been a 'suggestion' of the EU.
What do you think?
Tweet
Posted by subrosa at 09:30

It isn't, and there is no such idea.

However, EU law is superior to the laws of the member states, that is quite explicit in the treaties of Rome, Maastricht, and Lisbon, and cannot be wished away - not even by the egregious Salmond.

Of course it's true that treaties can be abrogated.

Are we now suggesting that Scotland might go for real independence, as enjoyed by Norway, Switzerland, Canada, New Zealand, China - to name but a few, and tell the EU where to shove it?

Might this be the third option on the Ballot?

If Option 3 appears on the ballot, and I was convinced it was true independence, I'd sign it in my own blood.

IMHO, that is the only independence worth voting for.

Look at Greece, folks. THAT is our future 10 years following faux independence.

Look at Switzerland or Norway and you can see us in five years time following true independence.

Salmond will mess this up if his dreams start and end with becoming a vassal state.

Weekend yachtsman, the EU gives many indications it believes it is so.
If a previously independent state says to the EU, sod you , we are off,
what exactly is the EU going to do about it? Interesting question.
The only thing to vote for is option 3, Full independence. Then after a period of rational thought the country can decide what alliances,if any , we want to make, not legacy arrangements from the past that we had no say in,and are decidedly not to our advantage.

Captain Ranty, fully agree.
Just thinking about Greece, this morning, and am starting to think that what happened here 300 years ago is very similar, it just happened over a longer time, for us ,a slow motion car crash.
Do we want to go through that again?
We have great potential, as a people and a country, but not as vassals to any one,certainly not to non elected states like the EU,which more and more seems to be copying the old USSR.

Apogee,
You may wish to read up on Algeria and Greenland's escape from the EU or the constitutional position of the Channel Islands and the Isle of Man.
The Lisbon Treaty Article 50 sets out the procedure for leaving.

Hi Brian, Thanks for the pointers,Had forgotten about Greenland,so there is a precedent for escaping after all !
So I wonder why so often we are told we cannot leave,is this deliberate disinformation,we can't do this or that so we just give up ?

Hi Apogee,
We cannot leave because all those tax-free jobs and pensions for failed politicians would end.
I would be more worried that Sean Penn ("I've been to Sotchland, have you?") claims that Scotland can't be independent because it's the jaggedy bit on top of England and so we have first dibs.

I wish people would stop calling some Unionists 'traitors' or 'Quislings'. They are not and it is insulting to them. I have members of my family in Dundee who think it wrong that Scotland should break from the Union. I do not call, and would not dream of calling them, traitors. I would prefer the description of being wrong in their arguments. It's not going to help convince the floating voters to vote for independence if we are to lower our standards by calling staunch Unionists, 'traitors'.
In any democratic system people of different views have the right to express their heart-felt convictions without being branded something they are not. It is only good manners to respect another's view. We don't have to agree with their stance but it is imperative to understand that they believe that their point of view is the true conviction and that we independent minded people are the so called 'traitors'. They don't call us 'traitors' so why not reciprocate the good manners.

Hi Brian, seems a good reason to get out ASAP.
Sean Penn,I can remember some of his previous history and while he is welcome to have an opinion, would not consider his opinion of any more worth than any other uninformed actor.

Hi Gedguy, don't think I called any Unionists, traitors or Quislings recently.
Misled perhaps, People not understanding the truth of the matter, having being misinformed,possibly by official sources.
I agree that everyone is allowed to hold an opinion(so far),you say members of your family are unionists, I would hope we can enlighten you all and so show the error of those opinions.Afraid that there is precious few good manners in political discussion.

Apogee,
I've been trying to convince my Unionist family members for years about the benefit of independence. They have their opinion on the matter and I have mine.