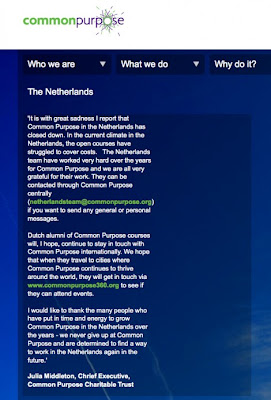 The Common Purpose network in the Netherlands is closing, but as James Higham asks 'Have they achieved their infiltration or have they been outed?'

I suggest the former.
Tweet
Posted by subrosa at 13:41

They could be in the process of re-branding, the current brand is now pretty toxic.
What will the new brand be?

There's a thought Apogee. As a fake charity they won't have a problem getting funds.

The police, local councils, banks etc. - just key in a location and press apply to check out other UK 'graduates'.

I hadn't heard of these people. Sound a bit like a lefty Masons outfit.

No doubt another story that BBC Scotland will 'not see'.

What a corrupt country we are living in.

Thanks Clarinda, I've had a look. It's a indoctrinisation organisation, of that there is no doubt.

It has a lot of influence pa_broon and we pay for it. Look at the links.

Another disgrace from Glasgow CH. Thanks for the link.

Seems there is a link SB as doors revolve and revolve.

Mmm CH, I missed that one. No wonder Easterhouses is as it is.

I didn't know that you were aware of Common Purpose, Sabrosa.

I read that it was set up in 1989, shortly after the General Assembly of the UN agreed to the general idea of The Millenium Goals (end of poverty and disease throughout the word). As I understand it, it was at that point that CP started training people to use Non-Government Organisations (NGOs) to sidestep Government, or act outside Government (with or without Government connivance). In 1995, it became a 'Not For Profit' organisation (Fake Charity), and therefore ceased to be required to publish accounts or respond to FOIs. All the time, it has been working to further the interests of the UN, and in particular, the WHO. I suppose that must be the 'Common Purpose'. I wonder who paid the enormous set-up costs?

I feel that there is probably nothing sinister about the closure in the Netherlands. Why should it close if it has plenty of applicants? Most probably, the sources of trainees have dried up.

The aim of the common purpose (so I am told by people who have attended their courses but were not 'suited' to the programme) - is to instil in the graduates a the common purpose of the Club of Rome, (google will bring up some similarities in names and their admitted agenda)

The aim is to have suitably trained persons at key posts in the public sector, civil or public service. You should find that most of the Police Chiefs are CP grads; certainly many of the senior positions are also filled with likewise. They are encouraged to support and promote other CP grads into decision making position to ensure that the common purpose is adhered to.

Club of Rome is funded by Rothschild, and Common Purpose is headed by the ex-marxist Julia Middleton, and it has links to such organisations as Demos. Governments and local councils pay a great deal of money to put their staff through the CP training. But if you trace the thread back you will usually find another CP grad authorising the funding.

might give you some more information on what they want and how they operate. Not nice people really.

Good research Junican and roughly what I've read in recent times. I'm more suspicious about the Dutch closure. The idea I thought was to spread so why close.

Ah Michele, I've never spoken to anyone who has attended their courses - or admitted to doing so. I've had my suspicions about a couple of acquaintances who may have attended as they were senior civil servants.

Many thanks for your detailed comment. It will give others an insight into their style.