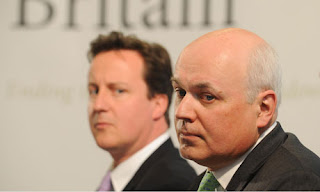 Earlier in the year David Cameron set out his Welfare Reform Bill plans in which the coalition government vowed to 'make work pay'. The PM believes the bill would 'bring about the most fundamental and radical changes to the welfare system since it began'.

The Westminster government says, with five million people of working age on out-of-work benefits and 1.4 million of those for nearly a decade, that unemployment has become entrenched in many communities.

Iain Duncan Smith, Work and Pensions Secretary, has the unenviable task of creating a single universal credit which he hopes will come into force in 2013.
He considers the bill offers a 'once-in-a-generation' opportunity to overhaul a dysfunctional and chaotic benefits system that locks people in poverty and stifles aspiration'.
The Work Capability Assessment was introduced to verify the disabilities of those benefit claimants who state they're unable to work.  It's a controversial assessment and not least because of this.  Cancer suffers receiving chemotherapy or radiation treatment are not exempt from the WCA.

Unlike Caron, I think the minds of the whole coalition government should be focused on this erroneous decision and not only LibDem MPs.

If you haven't signed her petition - asking the government to withdraw its proposals and to ensure anyone undergoing this treatment will be automatically exempted - please do so here. The words 'you have cancer' can break the strongest mind and body. The treatments also.

Every signature may help right this wrong.

I remember IDS visiting Glasgow and telling us all how bad it was. I'm sure he could have found the same levels of lifestyle in any of Engerlands big cities.

I also remember being down to take part in a programme which had him living in a high rise for a few weeks. I also remember him having to leave because of pressing government business after 24 hours or so.

It's difficult to imagine that Eton or Oxbridge types being able to come up with any sort of scheme which would meaningfully address the problems.

The fact they've included cancer sufferers and those on chemo kind of points to their less than full understanding of how to delver fairness based on the realities.

It's hardwired into their nurture.

Indeed there is a wrong needing righted !

But - I am sorry SR / Tris I cannot sign your petition however well meaning it is.

Whilst the word ‘cancer’ undoubtedly produces an emotive response, cancer patients are not alone in being subjected to this iniquitous WCA.

There are many, many other patients with equally serious and debilitating conditions who will also be subject to the questionable scrutiny of the DWP and their private partner ATOS.

This entire policy is misguided, being driven only by the extreme right wing dogma of Mr Ian Duncan Smith.

It has been this government’s unwritten policy to divide and rule – the public or the private sector; the young or the old; - let them not now divide cancer patients from other patients living with serious conditions.

We should ALL be united against the obvious iniquities of what is about to happen to ALL patients with major conditions who are in receipt of a benefit.

Now that would make in interesting post TT. I expect to read about your experience on your blog soon.

This should be an ePetition to have any hope of being effective.

It is hardwired Crinkly and it goes on quietly without much protest. Part of the problem is that the quangos which were originally set up to be of benefit to the people are now on the other side.

That's fair enough JRB and I appreciate your reasons. I think Caron drafted this using the details from MacMillan nurses who mainly deal with cancer patients.

Of course we should protest about all patients with major conditions. I'll see if I can do something about that.

You can add it to the link in the petition.

Unfortunately, what the Tories are doing is not an attempt to reform the welfare system (which is long overdue). It is a cost cutting exercise which takes no account of the cicumstances of the individual. It is not unknown for people to die from the conditions that did not prevent them from going to work, before their appeals have been heard.

Every single case I have come across which I have referred to appeal has won that appeal. But how many people don't have access to someone who can advise them, or don't have the strength to appeal as they can't take the stress?

The chancers, the people who are at it, will work this system, the same as any other system. But the genuinely ill & incapacitated risk falling through the cracks, & all for the sake of saving a few bob.

It's a disgrace & I would like to see the Scottish Parliament do something about it.

What can the SG do about it though Observer?

A friend of mine died at the turn of the year. She'd been disabled for some years and attended various assessments. She used to say she could pick out the fraudsters quite easily if she sat across the street in her car. The limps etc would all begin just before the entrance.

Of course not every serious ailment is so obvious, but those most in need have to take priority. I just don't know how we could ensure that happens.