Eaten Away By Lipstick 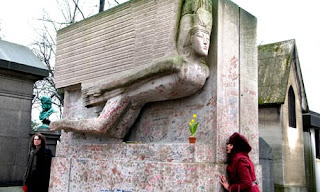 Back in the 70s I accompanied a friend on a visit to Jim Morrison's grave in Paris's Pere Lachaise cemetery.  I had no interest in Morrison so wandered around rather aimlessly, until I discovered a gravestone tattooed with lipstick kisses and adorned by flowers and notes.  It marked the internment of Oscar Wilde and led to more than a fleeting interest in his works. Sadly Jacob Epstein's  naked flying angel had been badly vandalised by then.

Nearly 40 years later the memorial has been restored, the angel's scrotum replaced and the tomb fenced in by a glass wall in order to protect it from his devotees. The unveiling ceremony took place last Wednesday.

Although Paris authorities offered a fraction of the cost of preserving the memorial, the Irish came to the rescue and paid for it through the office of public works in Dublin, which is responsible for a number of Irish monuments and buildings overseas. Representatives from Dublin and France attended the event.

Also at the unveiling was actor turned writer Rupert Everett whose acting roles include adaptions of The Importance of Being Ernest and the Ideal Husband.  Everett plans to begin shooting his own screenplay about Wilde so funding must now be in place.  He will take the lead and direct, with a cast that includes Colin Firth, Emily Watson and Tom Wilkinson and the film will focus on Wilde's last three years. I'm no fan of Everett's but the very mention of Colin Firth makes it one film I must see.

"The tragedy of ageing is not that we grow old, it is that we do not grow old."
Oscar Wilde

Oh great ... it'll now end up a giant litter bin! Don't journalists think by the way. it wasn't the lipstick eroding the monument but the cleaning process! Bah!

Exactly SH. Why it wasn't left alone I've no idea.