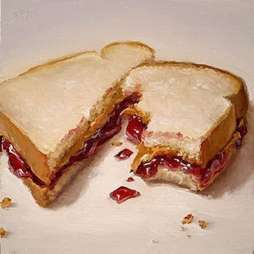 Yesterday my mention of a jeelie piece produced this comment from Macheath:


...'jeelie piece' - that brings back memories - and a scots spelling query; the breaktime snack at my primary school was known to all and sundry as a leavie - or leavy or levie? I have no ideal how to spell it and, as a home-counties-based exile, this is probably the best way to find out.


Can anyone help solve the spelling mystery?


Observer takes me to task about my 'jeelie' spelling and she's possibly correct or could it be a simple east/west spelling divide?


It's a jeely piece surely, like the weans couldn't get flung oot a twenty story flat.


I won't expound the delights of 'shivery bites' - another gourmet delicacy from my childhood which today's youngsters will, sadly, never experience.

Mnay thanks, SR; I look forward to hearing the results.

For those who may have missed out, may I include this charmingly didactic link to the Jeely(ie?) Piece Song* -

- which, for the benefit of the English, is a close relative of 'ye cannae shove yer granny off a bus', the interminable accompaniment to a million coach trips:


*Which sadly misses out my favourite verse:
On the first day ma maw flung oot a daud o' Hovis broon;
It came skytin' oot the windae and went up insteid o' doon.
Noo every twenty-seven hoors it comes back intae sight
'Cause ma piece went intae orbit and became a satellite.

Found this we called them sarnys when eating our pieces.

If it's the same thing, they were called "chittery pieces" when we emerged from a dip in the Forth at Portobello.
Anent your earlier article (and this will date me), I remember as a boy asking for both jam and butter on my bread. My mother obliged but said as she passed it over "You know there's a war on". Next Sunday I asked "Can I have a war on?"

Enjoyable contribution Macheath. Many thanks.

Still awaiting an answer for you.

Thanks CH, much appreciated.

Think they were the same things Hamish.

We never had butter on our jeelie pieces, only on the sugar ones for obvious reasons.

Isn't it strange how such small details sticks in our memories after all these years?

According to The Pocket Guide to Scots Words" (Richard Drew, Glasgow), your spelling is correct.

Is that for Macheath Tris or my jeelie? I never checked jeelie out as that's the spelling I've used since childhood.

Ah, thanks Tris. Was there anything at your link about Macheath's leavie, leavy or levie?

No SR. It's not a link, but a dictionary of Scots on old fashioned paper. :)

I'm wondering if the derivation is from something that was left over... (from breakfast maybe) in which case the most likely spelling would be 'leavie', I imagine.

Ah Tris, you're a gem. I don't know which part of Scotland Macheath grew up. Maybe it was a 'localism' from a small community.

But I think your assessment may well be the answer, although I doubt if leftover macaroni cheese was ever put in a 'leavie'.

Why that delicacy sprang to mind was because it was my brother's favourite and in those days I didn't like pasta. It was served at least once a week and I ploughed through it to the best of my ability. Brother always had my remains.

Mind you, going back to your assessment, none of us left anything on our plates in those days because we knew 'you'll get it tomorrow'.

Why didn't I find that link when I googled it Tris? Don't answer. :)

I've now put it on my Evernote.

SR - you're probably right; I have to confess to being a borderer, so there may have been some cultural leakage up from Tyneside.

We still had playground punch-ups over the Celtic-Rangers divide, though; we were Scots enough for that.

Ah, now you tell me Macheath! Border country has it's own language. I lived there for a few years when a teenager and moving from Dundee was a cultural shock. With hindsight a pleasant one, but the language barrier... :)

@Hamish: yes, in Galloway they were "chittery bites". And I'm sure the Solway was JUST as cold as the Forth, so there, nyah!

WY, auch the Tay is colder than the Forth or Solway. Must be, it's further north. :)

The Gulf Stream keeps the Solway nice and toasty compared to the Tay - or, for that matter, the beach at Eyemouth.

We once took some friends from Dumfries there for a picnic; they merrily headed into the sea as they had done the day before at home, then rushed back out, horrified, shivering and turning a rather fetching shade of blue.

SR, I greatly appreciate your efforts on my behalf; in return, I hope it will gladden your heart to hear that all the far-scattered members of Clan Macheath are passing on the tradition of the 'shivery-bite', from the Channel Island beaches to the rivers of North India.

Macheath, I was tempted to mention the gulf stream and the Solway but I'm sure WY knew he had a distinct advance in the first place.

Jings, I'm delighted to know that the shivery bites survives. As soon as I was old enough to make a piece I used to make my own. There wasn't much choice then other than jam or cheese so I crammed the two bits of pan loaf with cheese (usually cheddar). My mother wouldn't buy sliced bread (more expensive) so I'd cut the slices myself, thus producing a shivery bite which resembled a meal for two dockers. :)

Still, when walking out of Dundee's baths with the Tay just a couple of yards in front and no barriers other than the usual cold wind, my self-made piece was always appreciated.

I can feel the tickle in my taste buds as I write. :)