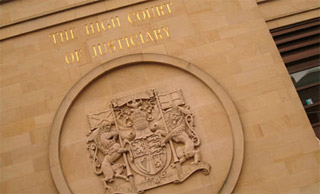 This is just one example why more and more people are losing faith in the Scottish justice system.
The trial judge, Lord Uist, called the situation 'most unfortunate'. Six hearings before a judge is able to pass sentence is incompetence from all concerned.
In its current form the system is failing all of us and requires rebuilding from bottom to top. The cost of endless court proceedings such as in this case, could possibly pay the winter heating bills of many Scottish pensioners and other vulnerable folk.
Time for Mr MacAskill to use his clout and stop this waste of taxpayers' money. If our courts started to collect the fines dished out by the judiciary that would be a start.
In this particular case I would like the victim's son to be reimbursed for the hearings he has attended because of other's ineptitude. No heads will roll of course and nothing will be done. This is not the manner in which I want an independent Scotland to process justice.
By all accounts the English system isn't any better.

"By all accounts the English system isn't any better"

A shocking state down here, as demonstrated by the imprisonment of the "tram ranter" Emma West "for her own protection" - this of course entails her children being taken into care, and the release of the four Somali women who racially assaulted a white girl and left her a total mess.

It is not even clear that Emma West actually racially abused anyone on the tram - she certainly displayed her anger about immigration, but since when did being angry become an offence (answer - under New Labour, when it became an offence to offend anyone. Something I find very offensive, but who do I prosecute about that?).

Whereas what the Somali women did was quite clearly a "hate crime" (, now, I'm not in favour of these extra laws for minority groups, and believe we already had the existing legislation to deal with such offences), but was dismissed by the Judge, who noted that the women, as Muslims, weren't used to the effects of hard liquor, so should be excused.

In this case it's not the system, it's incompetence by the 'professionals' that are to blame. That's how it reads to me from the report.

It is an amazingly inefficient cranky machine, is the law. I'm reminded that someone (Longfellow, was it) said something along the lines of 'The Wheels of Justice grind exceedingly slow...' (although I think he may have used the word 'God' as equating to Justice, rather than Kenny MacAskill).

The cost of these inefficiencies to the Scottish Taxpayer must be phenomenal. If you have ever served on a jury you will know how long everything takes. It doesn't help that no one seems to start doing anything till around 10. However judges and sheriffs must also take responsibility for time wasting. The ones I've seen in action seem to waste a good deal of time pontificating unnecessarily.

I was interested in the description of the woman as "a church goer".

You have to wonder if the Scotsman felt that the attempted raping of a 76 year old was not shocking enough in itself to hold the interest of their readers, and felt they had to outrage people further by intimating that the victim was a churchgoer. I mean, would the crime have been any less horrific had the woman been a heathen?

It's an interesting style the paper has adopted. Very Daily Star.

Are they still printing it in England and importing it?

Elby, words failed me too when I read about that incident and saw the videos.

But how do we appoint competent professionals F? That process seems to be an 'inside' job at present.

That's exactly my point Tris. There is no need for any system to be so inefficient.

Yes I have done jury service and I've also been a witness a small number of times. On both occasions the disruption to my daily routine lasted for days - when I was expected to turn up and sit around endlessly without any information whatsoever.

To add insult to injury I was offered my 'travelling costs'.

The times I have been called as a witness were also wasted. Never once was I called. Legal teams made 'arrangements' on the actual day but none of us was informed until much later in the day.

I wrote to my MP, who happens to be the Attorney General, about the wide discrepancy in sentencing in a number of cases that I had selected; all I got was the response that he couldn't comment on individual cases, and that evidence was undoubtedly given at the trials which was not reported in the media, which in turn lead to the judges making those decisions. Plus a load of statistics about sentencing, which I, with my relatively small knowledge of statistical analysis, felt were somewhat suspect in their interpretation.

'This is not the manner in which I want an independent Scotland to process justice.'

whats this a pre-Independence moan

with thanks to rabbie burns

The judiciary refuse to accept criticism EP and think themselves the 'elite' who shouldn't be troubled by the hoi polloi.

Niko, without wishing to sound offensive in any way, yer nae Rabbie Burns. :)

However I take your point.

I'd like to see the SNP completely renew our system. It's dated, it's expensive and it doesn't do what it should.

Was it incompetence or corruption that led to reportedly 'fake' evidence being used in the Lockerbie trial?

Maybe time to ask why Kenny MacAskill and Alex Salmond have not reformed the system?

It is time Aangirfan. I've no answer to your question, but speaking as someone who has had contact with the system over the years, it's an embarrassment to all folks with common sense.

It does need reform - and badly.

I'm called upon to be a professional witness from time to time so I know the inside of the Sheriff court in Glasgow like the back of ny hand. I have spent untold hours just sitting there & doing nothing as witnesses don't turn up, the case is sisted, the court doesn't have the time, or whatever. All the time I see huge numbers of polis sitting about doing the same thing. It's a ridiculous system. I would send out a few warrants for arrest & make an example of a few folk, which is an amazingly authoritarian statement for me to make, but justice depends on people doing their civic duty & turning up when they get a citation. I do.

On the subject of this case - six hearings before sentencing is utterly ridiculous & that should never happen. That is incompetence.

Surely this case must hold the money wasted record.

Since Robert Green was arrested & charged with committing a Breach of the Peace in February 2010 in relation to his attempt to hand out leaflets detailing the allegations in the Hollie Greig case, Scotland’s Crown Office have waged a bitter & expensive VENDETTA funded by taxpayers against Mr Green, resulting in FOURTEEN HEARINGS at Stonehaven Sheriff Court, nearly 16,000 travel miles for the accused, trips by Grampian Police Officers to England to search & raid homes & seize property including computers & documents, Crown Office staff being flown into Aberdeen especially for the case, and a witness list which has varied in numbers and currently totals SIXTY ONE persons. Dame Elish Angiolini’s name is now to be added to that witness list.

I must mention my association with Dundee and Perth Sheriff court was also professional and similar to you experiences Observer.

I would like to see total reform of the system. The law is misusing the honest public.

Ian, that case is seldom reported in the MSM these days. I didn't realise it's still on going.

Its far from over with yet another hearing in Stonehaven on Jan 16th.

This is now a Scottish record, worthy of a press mention for that alone.

It will be interesting to see if it does get a mention Ian. I'll keep my eyes peeled.