The Answer To 'Disgusting' Sandwiches 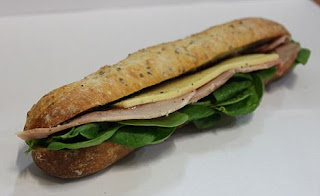 A Police Federation report, called Lessons From the Front Line, asked officers how they coped during the summer riots. More than 8,500 responded to the federation's request for information and one of the most mentioned concerns was the poor quality of sandwiches on offer.  Fillings like tuna, chicken and egg had 'limited shelf life' and exposed our protectors to the risk of food poisoning. Others complained the fillings were poor.

Surely some of these officers must have been seconded from Lothian and Borders Police, who feel sandwiches deserve high priority.  They used a 45 page document to detail their request for sandwiches, crisps and a drink in its recent tender specification.

Who writes this nonsense? Is it some equalities department which has to substantiate their large salaries?

Lothian and Borders force insists that officers will need a baguette measuring 11 inches (photo) and containing one of the 17 fillings outlined, a 34.5g packet of crisps and mineral water supplied from Scottish wells or springs. The healthy eating lobby won't be happy to know that only 25% of the baguettes are to compose of brown bread.  Not a mention of wholemeal in sight.


A Scot, Dr George McGavin, has solved the problem (a must-watch video) and perhaps saved the treasury a few thousand pounds too.

If they're good enough for the military - albeit the US military at present - surely they're good enough for our police?  They sound rather good to me although I hope the filling isn't only strawberry jam. Reminds me too much of my childhood when 'jeelie pieces' (jam sandwiches) that filled the corners of a child's stomach between meals, consisted of home made strawberry or raspberry jam - no butter of course.  When my mother was short of a few pennies - which was often - our sandwiches composed of sugar sprinkled on an exceedingly scant layer of buttered bread.  We were always reminded by my father that butter was very expensive although was needed in the interests of 'science'.

Maybe that's when my interest in chemistry and other related sciences developed along with my interest in politics. One has survived - nay thrived - and the other is responsible for much of my cynical outlook.
Tweet
Posted by subrosa at 19:48

SR, Would a 'jeelie piece' be the same as a Jam Buttie?

Do they have special fillings for their ethnic minorities?

Walkers are 34.5g. I assume other main brands probably are. Cheaper brands and multipacks are a few gm less.
So they are effectively specifying a full price main brand avoiding multipacs and supermarket brands.

Nice to know taxpayers' money is being well spent!

'jeelie piece' - that brings back memories - and a scots spelling query; the breaktime snack at my primary school was known to all and sundry as a leavie - or leavy or levie? I have no ideal how to spell it and, as a home-counties-based exile, this is probably the best way to find out.

So the bobbies on the beat wants a ‘play-piece’ - a sarnie, a packet of crisps and a wee drink o’ watter. Sounds just like any wain.

So why does it take a 10,000 word, 45 page specification document to describe said sarnie, packet of crisps and wee drink o’ watter.

And how in the name of the wee man did some mathematical genius within Lothian and Borders Constabulary think for one minute that £70,000 for 7,500 ‘play-pieces’ is value for money.

That works out at £9.33 for each ‘play-piece’ – they would be cheaper buying their sarnies over the counter at M & S.

It would Joe, yes.

No idea as to why the weight of crisps has to be so. Possibly some healthy eating lobby wrote it on the back of a fag packet.

Oh I'm sure they will.

Woodsy - you've crisps in the cupboard. I can tell! I try not to buy them because good crisps, such as Kettle crisps (no artificial additives) are one of my long list of weaknesses. Kettles crisps come in large bags too. :)

Macheath, I'll do a wee post to see if someone can help you resolve your frustrating problem with spelling. :)

They would JRB, but I still think the 2 year old sandwich would suit them down to the ground. After all it could well be two years before many of them have anything to do with the 'front line'.

Good to see how our money's wasted though isn't it?

It's a jeely piece surely, like the weans couldn't get flung oot a twenty story flat. I have sympathy for the polis, the sarnies sound bogging, & it's not as if they could do a run to Greggs for the lunches as it was on fire at the time.

What you are missing in this is that Lothian & Borders police are using the tendering process as far as they can to give the work to Scottish companies.

I didn't see that in any report Indy but I'll take your word for it.

Is that not against 'Best Value' practices though? I thought all tenders had to be put out across the UK and beyond.