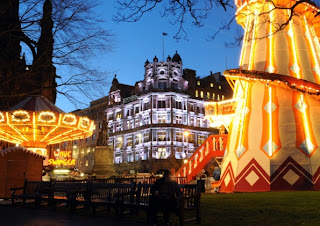 The whole of Europe must know about the dismal Edinburgh tram project and the problems created by incompetent councillors and other officials. The streets of Edinburgh have been dug up for some years now and small businesses have closed by the dozen, yet the councillors have decided Edinburgh needs trams. It doesn't. It has a bus service which is second to none but will be shunted into the sidings if, or when, the tram line is completed.

There's something very wrong in the corridors of power of Edinburgh's City Chambers.  Those who purport to 'listen to the people' appear to be deaf and others seem to live in a fictional bubble.

It will be a few years until the streets are safe from roadworks if all goes to plan, yet the Burghers want to further reduce parking in a highly residential part of the Old Town. Even someone like me, who lived in Edinburgh only for a short time many years ago, knows the traffic chaos which will ensue from this new fantasy.  The Burghers detest cars and are determined to ensure none reach the city centre - with exceptions of course for the great and the good.

Also this week, rearing its head once again, is the proposal for a tourist tax. The idea is to tax hotel accommodation and the Burghers are excited with the estimate that it could raise up to £10m a year in this way.  Nowhere else in the UK is this tax implemented - mainly because it is blatant greed - but the green councillor thinks it's a wonderful idea because "it's unlikely to discourage visitors or affect the hotel trade."  I did mention a fictional bubble didn't I?

For some months now Jenners of Princes Street, the famous department store (shown in photograph), has been tastefully lit up.  But Edinburgh's main heritage watchdog, the Cockburn Association, isn't happy because Princes Street risks being 'tacky' if retailers are allowed to light up their buildings after dark without proper permission. I understand Primark has also illuminated their new building but can find no images of it.

This objection caused much laughter here. Edinburgh's streets have been  like bomb sites for years; walking up the Royal Mile allows visitors to see and hear varying levels of tackiness from certain retailers and Princes Street has been a pathetic shadow of its former self for the past 30 years, yet there is objection to retailers lighting up their premises. The necessary permission will include a hefty fee no doubt.

It's time the City Chambers was cleared out and people installed who understand the responsibilities and duties connected with governing a great city. Such responsibilities are not always about taxing businesses and people until they bleed or move to other parts of the country.

Until then all I ask is -  lighten up Edinburgh.
Tweet
Posted by subrosa at 09:17

On the money SB. A similar tax was tried in Ibiza. Every tourist was charged a Euro a day. The hotels ended up paying it and then the Island government had to withdraw it.

The responsibility of the councilors and council officers is significant given that Edinburgh is the capital city and it has so many fabulous aspects to it.

History will record the efforts made by those in positions of power. They may not like what is written.

XX small businesses have closed by the dozen, yet the councillors have decided Edinburgh needs trams.XX

Sorry, I do not see the link here.

Are you suggesting the council, ie the TAX payer should be supporting incompitent, lazy bussinessmen?

If a bussiness goes bust, what the HEL has that to do with the council, with or without trams?

On Shandwick Place alone several business' folded because the street was shut at either end for a year. Basically even persons on foot were steered away because the road just looked closed. Metal fencing ran down each curb for half a mile closing in the entire road surface to be dug up then dug up again, people just didn't go that way so the business' had no passing trade.

Along the length of Leith Walk, parking was suspended and the road closed or put into contraflow willy-nilly so it basically became impossible to navigate from one day to the next, (I live just off Leith Walk myself.) Several times cars could be seen travelling down the wrong side of the road because that was how it was the day before.

Leith Walk relies on passing motorists more than Shandwick Place does (which was all double yellow lines anyway.) Since hardly anyone ventured down Leith Walk in cars, business suffered.

Edinburgh council have got form on wacky traffic management, the last lot in the new town was a disatser and had to be howked out after a couple months. I'm not averse to a carless city centre but it needs to be done properly and alternatives put in place first.

On tacky stores. Mmm, one thing I don't like are the so called 'Scottish' shops. If any foreign folk are reading, they're not really Scottish.

I may have said this before here but, when I retire (or win the lottery) I'm going to move to India and sell faux Indian tat to on their high streets from shops blaring out electro-hiphop-bangra fusion music.

Shortbread tin Scotland was at least quaint, those shops are seriously tacky.

On the upside though, Princes Street is actually quite pleasant sans traffic with all the xmas stuff going on. I quite enjoy my evening walk along its length, although xmas does make me boak, I go along in the hope someone throws themself from the top of the wheel when they realise how much crap they bought at the German Market.

Tell me about it Pa! I also live not far from Leith Walk. At times, when the work was at it's worst it was really difficult to see where to drive. So many cones! It was much worse at night.

Crossing Queen Street was so dangerous! There were more than one set of traffic lights at the crossings and they changed the sequences and took away the wee islands in the middle.

You're spot on with the shops. You had to walk along these caged in routes which weren't wide enough and at times they just stopped and you had to retrace your steps. the shop people were very concerned about the track laying which was still to be done. Thankfully that's not a problem for now.

No doubt some businesses took advantage of the situation but the vast majority were trying really hard to survive.

I should have mentioned that TT - about the Ibiza tax.

Edinburgh does have a fascinating history however, like Dundee, it has made a poor choice of councillors.

Like some of the above commenters, I live in Edinburgh.
Your observations are painfully true SR.
What sticks in my graw is that Edinburgh Council never apologise when things go wrong. Far less do they back off when their badly-laid schemes gang agley.
The Cowgate could have been a relief road, but instead clubs were encouraged to proliferate, and it is now closed to traffic at night.
The Western relief road running along a disused railway track has been stifled by the introduction of junctions, turn-offs, and pedestrian crossings.
The powers-that-be have never forgiven us for rejecting their clumsy congestion charge proposals.
They are impervious to the idea that most motorists including bus and taxi drivers could give them useful advice about how to reduce congestion.

To end on a positive note, the recently re-opened Scottish Portrait Gallery in Queen Street is a joy. The structure of the original building has largely been preserved but sympathetically enhanced. And I promise you, there's something in there for everyone.

If you owned a business and the council decided they would need to dig up the roads which ensure your customers' access, would you be concerned?

Would you continue to try to trade, as many have done in Edinburgh, believing the council's spin that access (both vehicular and pedestrian) would resume within weeks? Some businesses in Edinburgh have had their access denied for some years now and hence have had to declare bankruptcy.

Pa, my sympathies, although I do miss the readily available arts facilities in the city.

My last visit (on a Sunday) became an obstacle course TT and with the latest parking restrictions all around, I decided Perth was a far more customer friendly city.

Does the Council insist every councillor has to arrive by public transport? (NOT expenses-claimable Taxi.)

Does Edinburgh offer its councillors free or subsidised parking at or close to the Offices?

An FOI enquiry about how much each councillor claims for transport/attendance expenses would make interesting reading.

Aye. I was taking it as a püurely "money question". Of course the traffic upheavel had for a momenmt escaped me.

If remembered correctly from various reading Joe, I think the answer is No and Yes. I would use the FOIA if I lived in Edinburgh.

Furor, I don't expect you to know the ins and outs of living in present day Edinburgh. I haven't experienced them much myself but thankfully I have no need to do so.

It's small businesses, who were promised their accesses would only be curtailed for a very short period, which have suffered. Some have lost their accesses for years and had to give up. The council doesn't care. What's a few specialised shops to them? Only a vote or two.

Much more beneficial to ensure the likes of John Lewis are accessed.

Furor, I don't expect you to know the ins and outs of living in present day Edinburgh.XX

But I AM pretty up to date on the chaos tram line building and repair can cause. Both being regular features here, particularly in the East.

I had just not added two and two. I.e traffic chaos due to tram line building, and Edinburgh.

Can not see the point of them myself. Busses are much more flexible, and cause much less disrution.