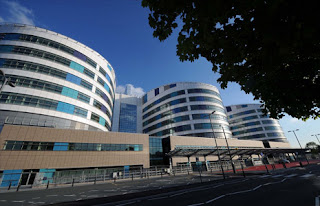 A soldier has died of wounds he received from an IED explosion in Afghanistan.

He belonged to 35 Engineer Regiment, Royal Engineers and died in Queen Elizabeth Hospital, Birmingham after being medivaced from Camp Bastion, Helmand Province on Tuesday.

His family were by his side. May he now be at peace.

A total of 391 British troops have died since the start of the Afghanistan war in 2001.

Is Afghanistan becoming the UK's invisible war? This week foreign ministers from 90 countries met for a one day conference in Bonn, when  Karzai told the 1,000 delegates that his government needed long-term international backing.

"We will need your steadfast support for at least another decade after the troops pull out," he said and his plea produced the result he wanted; Hilary Clinton announced the US was ending a freeze on hundreds of millions of dollars in development funds due to 'financial reforms' by Kabul.

Neither the Taliban, who in recent months are reported to have been making their way back into Afghan politics via fragile peace talks, or Pakistan - a major influence on Afghanistan's affairs - and which is still fuming over a Nato strike which left 24 of its soldiers dead this month, chose to attend.  The absence of both parties, both crucial to security and stability in Afghanistan, more or less ensured the conference failed in its mission to plan the future of the country.

When will politicians realise it isn't their endeavours which will create stability in Afghanistan, but it is the people who will decide the future of their country.

Westminster has been seriously silent about this war. Their minds are concentrated upon its finances and not the outcomes or the wellbeing and sensible uses of our military. Unsurprisingly, the coalition is waiting to see what the White House will do next.

"What America does next is key to keeping the coalition together," said one senior military source. "If the Americans stay, everybody else will. If the Americans look like they are racing for the door, then everyone else will do that too."
source


Tell us something we don't know.
Tweet
Posted by subrosa at 09:11

When Karzai says “We will need your steadfast support for at least another decade” - one should read “cash” rather than “support”.
How else will such a corrupt regime be sustained?

It is long past time we were out of there, politically, economically and militarily.

Aye JRB, he achieved his desire - at least part of it - when the US lifted their freeze.

We should never have been there in the first place.

Wars being lost get forgotten.

Indeed OR. They become footnotes in history. Our politicians don't are though.