Is It Time We Had A Public Debate About Pulling Our Troops Out Of Afghanistan? 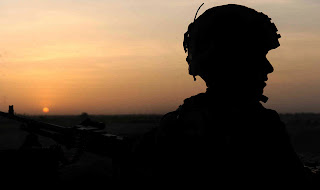 A British soldier has been killed in an explosion, while on foot patrol, in the Afghanistan war.

He belonged to the 5th Battalion The Rifles and was killed in the Babaji area of the Nahr-e Saraj district of Helmand province after a makeshift bomb (IED) went off.  His family have been told the hellish news according to the Ministry of Defence.

His death takes the number of British troops who have died since the war began in 2001 to 390.

Australians are debating whether their troops should be pulled out of Afghanistan. So far 33 Australian soldiers have died and many recognise the original reason for deployment - the capture of Osama bin Laden - has been achieved.  Comment from Phil Sparrow, an aid worker who has been in Afghanistan since 1999 with his family, is particularly insightful.

Isn't it time the UK had such a public debate?
Tweet
Posted by subrosa at 16:11

It has always seemed to me that it was a waste of time.

Yes, Al Qa'ida was being trained there, and yes, they were a threat to world security, but invading Afghanistan was something that we all know had never proved possible before and was unlikely to prove possible now. So it was a gesture. And one that has cost so many lives on all sides.

I know that it hasn't all be disaster. They say schools have been built; they say that girls and women have more opportunities than before.

While I don't claim any expertise, I'd make a fair bet that within a year of the withdrawal of Nato, the Taliban and Al Qa'ida will be back.

There's no point in us pretending we understand the place or the people. We can't and we don't.

There should be a debate in parliament now. Perhaps one of their famous public petition debates would force it.

But I suspect that in the end we will come out when America tells us we can.

I'd prefer it to simply be a Parliamentary debate, by politicians of all parties.

Mandatory attendance; on the 'front line' in Helmund province; publicised in advance; no British armed forces within 50 miles.

I think we were right to go in 2001 Tris, but wrong to create another war.

I'm sure you read the aid worker's contribution and think the majority on the ground feel that way.

That would certainly focus their attention Joe.

I fully agree.
I cannot see that it serves this country's interests in any way. We have been trying to pacify Afghanistan and the North West Frontier territories for a couple of centuries and have totally failed and there is no reason to believe that we will succeed now. Personally, I don't even think that the claims that bin Laden was allegedly hiding there, or that it was being used as a training ground for terrorists were adequate reasons for the invasion, and they are certainly not now, with terrorists now apparently being trained in Yemen and Somalia.
And why are the western politicians so arrogant as to believe that the our model of democracy is correct and should be imposed on another country? The very fact that relatively few people in this country seem to approve of our military being sent to Afghanistan, and yet we are still there, is hardly an advertisement for our "democratic" system. If they prefer their tribal system and don't want to be controlled by a corrupt government in Kabul, who can blame them? I certainly don't.

Bin Laden was the reason given to the public but I never quite believed it was only that. If it was then he could have been captured long before this year. After all he was supposedly in mountains and all that's needed to be done is for both sides of a mountain to be covered. Pakistan were 'onside' because they want money so there wasn't a problem.

No, it was for political reasons such as oil, minerals and to be seen as a world force.