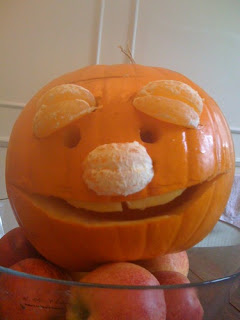 Alex Salmond Pumpkin
with the kind permission of @ AlisdairStephen
Last Friday I spent a couple of hours with a friend who had requested a little help with sewing together her grandsons' Halloween outfits. She's never been a seamstress and poor eyesight is a disadvantage in the skill, so I was happy to take my sewing machine and let it stitch up the seams costumes for a fierce looking pirate and a very scary alien. The costumes had been put together from various old items of clothing and the design and preparation had obviously given my friend great pleasure.
The conversation turned to their use and I discovered they were to be worn tonight for an event taking place in a local village hall.  The boys live in a small, close community and this is the younger one's first appearance in the yearly Halloween play annually directed and produced by his father, who always hankered after the glamour of the stage, but realised he would be a much more successful engineer.
For many years this village has had a similar Halloween event and it all started when the American trick-or-treat hysteria arrived in the UK back in the 60s.  The villagers were, until then, used to the Scottish tradition of guising where children would visit local homes, perform their party pieces and be happy to accept sweets, lemonade and/or cakes. Money seldom changed hands in those days, but with the acceptance of the American tradition, money now seems to be the only acceptable prize. This small community refused to accept trick-or-treat and decided, instead of the children going round doors, it would be more fun if an evening's entertainment was held in the small hall. This resulted in the birth of the Guising Play.


Earlier today I took my small contribution of popcorn to the catering 'manager' and noticed a few wallpapering tables already heaving with goodies.  The sound effects department (the local postie and his teenage son) were rehearsing weird noises courtesy of CDs played through their home hi-fi system which seems to have been transported without incident and all appeared to be a flurry of organised chaos.
Maybe when you read this I'll be sitting in a village hall beside one particularly proud granny and surrounded by many more of them, while being frightened out of my wits by talented children.  The whole village will have turned out to watch this year's Guising Play - the story line having been a well kept secret for weeks.
Thankfully, there continues to be small clusters of society where children can provide entertainment without expecting a monetary reward.  Long may it continue. I can sympathise with this blogger though. Country living does have its rewards.

If you'd like a Halloween story look no further than here - and it's free. There's also the suggestion that we should wish each other a 'Happy Hallowmas'.  Why not?

There's been a change this year. Right up to last year, most guisers were small, dressed up, told a terrible joke and were polite.

This year they practically battered the door down, yelling and screaming. It sounded more like the bailiffs arriving than the harmless tradition it used to be.

For the local pensioners it must be a terrifying experience.

This was the first year I refused to answer the door and kept all the sweets. In years to come, I'll know who to blame for my toothaches.

I don't get any these days LI. Too far into the sticks. However, speaking to pensioners who live in town they've been scared for a few years because of the threatening behaviour or some - mainly teenagers. Wee ones aren't seen for possibly quite a few reasons.