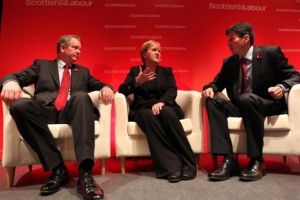 Labour's leadership elections are complex and the one for the leader of the Scottish branch has been particularly lengthy with subdued interest from the MSM and little from many bloggers.  On Saturday Scottish Labour held a special conference in Glasgow, where their retiring leader Iain Gray was most ungracious about the SNP and candidates for the leadership and deputy leadership participated in a hustings

They also unanimously agree to support the public sector strikes which are planned for 30 November; perhaps in an attempt to show some form of detachment from their UK Labour leader who was booed at last month's TUC conference in London for saying an earlier one day strike, on the same issue, had been a 'mistake'. It was a different message regarding minimum alcohol pricing.  All three leadership candidates said they would oppose the Bill but acknowledged, owing to the government's majority, there was nothing they could do.

The leadership candidates also appeared on yesterday's Politics Show but there was no mention of this.  'The Labour Party has called on the Scottish Government to publish legal advice on Scotland's status in the EU should it become independent'.

If Labour are not prepared to accept the Scottish Government's explanation, then surely they can make their own enquiries through the EU legal department. The article doesn't explain why the Scottish Government refused the FOI from the Labour MEP Catherine Stihler and Ms Stihler hasn't made the reason given public. One word of caution for the SNP in this matter.  They must be very clear and honest with the electorate regards an independent Scotland's membership of the EU. Nothing less will do.

To show my impartiality, I've placed another poll on the right hand side where votes for the leadership of Scottish Labour can be recorded.
Tweet
Posted by subrosa at 09:34

Mr Gray’s bizarre speech was at best questionable but most certainly embarrassing to all within Scottish Labour. It only leaves an unpleasant taste and an unnecessary diversion for any future leader to deal with.

If Scottish Labour is to recover from the crushing and humiliating defeat at the hands of the Scottish people, then they must look to their own shortcomings rather than be swayed Mr Gray’s impersonation of a spoilt brat of a child lashing out at everyone and everything when he realises he is not getting it all his own way.

Failure of Scottish Labour to address the hopes and desires of a fundamentally socialist Scottish people because of a blinkered and sycophantic relationship with Westminster, who don’t give a toss about Scotland, can only lead to the same ignominious fate as befell the Tories in Scotland.

With the prospect of becoming Lord Lammermuir(?) fading into the grey mists it was a lost opportunity for this politically impoverished MSP 'leader' to bow out with some dignity and potential for his party and members. Do they still not get it that this sort of gutter language only improves the standing of the SNP. So much for the political nous of the unionists.

With the latest scintillating line-up of Labour contenders - his unconcealed vitriol did little to enhance their standing. Judging by reading some tweets and comments from the "almost 500" Labour attendees at their recent conference, they are seriously depressed by, amongst other issues, the lack of clarity in their political position between Holyrood and Westminster. Westminster still holds precedence over Labour in Scotland for it's London-centric pursuits and life-line. I'm afraid it's still Labour first with their version of Scotland as runner-up.

Labour love their FOI requests. They fire them off by the thousands, not to find the answers to genuine questions they have, but as a scattergun approach to try and find something, anything to trip up the Scottish Government. It's quite pathetic, really, and a total waste of public funds.

This request about the EU is a perfect example. They're not genuinely interested to know if an independent Scotland would be allowed to remain in the EU, they're just hoping the answer is anything other than "yes, absolutely". If it's not, they'll find something else to nitpick with. Obivously, the EU question is a fairly important one in the grand scheme of things, but they'll increasingly move towards inanity, like "will everyone need new passports since their nationality will now be Scottish rather than British?" or "will we still get Eastenders?"

The three stooges' performances on The Politics Show do not bode well for Labour's future. There's unlikely to be any positive change from Iain Gray, which does Scotland no favours whatsoever.

Doug, I would agree that what Labour are looking for is simply another obstacle to put in the way of independence.

This is a quote from an article by Gerry Hassan,

Forty one years ago when Labour gave evidence to the Kilbrandon Commission on the Constitution, the Labour delegation led by John Pollock were asked which they would choose if they had to: an independent, centre-left Scotland or a Conservative Britain, and they answered without reservation, a Conservative Britain.

The actual powers of this, "Scottish Leader", are still very unclear though I'm fairly certain that they won't have any authority over the MP's in Scotland. It's going to be fun watching the infighting between the new, "Leader", and Margaret Curran's Team Scotland.

Ta for the link. Isn't "Scottish Labour" and "Leadership" a contradiction in terms?

Yes JRB. I was going to call Gray's speech unsavoury but decided to be kinder.

Tom Harris would be the one to make the changes but I doubt if they'll vote for him. Too open, too positive and too aware of Labour's problems.

Clarinda, surely the man won't be knighted? Surely, please tell me it was a little fun on your behalf.

Perhaps it's time for new parties such as the SDA, although I note from NS that many staunch SNP supporters are critical of it.

I realised they liked FOIs Doug but thanks for the 'inside' information. Par for the course when they're unable to think of policies which are relevant. How sad that Labour is now reduced to such behaviour when they used to be a powerful force in Scotland.

Fortunately, the SNP have managed to usurp their position now, with a lot of help from the supporters of independence.

Thanks for the link Doug. I'll read it when I get back.

Pleasure Demetrius. Sorry, of course it is. I should know better.

Hmmm, not sure we should accept the Scottish Government's explanation for not publishing the legal advice on Scottish entry to the EU. Sorry, Labour might be on to something here.

Interesting to see that Labour are only "unconvinced" by Minimum Pricing - considering they were so half hearted in their opposition to it last year, even going so far as to come up with their own version.

Have I missed something Allan? I can't find the explanation the SG gave for not disclosing the reason.