A Message From The Wife Of An Oil Rig Worker 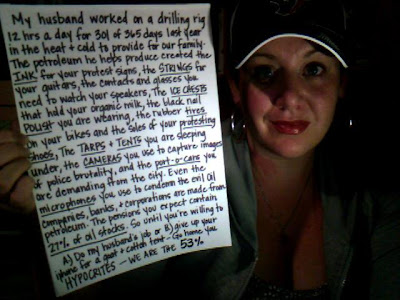 The other story that has me seething is that the baby boomers are responsible for our broken economy and how easy we had it.

I worked from the age of 14 (part-time/holidays)and then full time from the moment I left college. My husband and I both worked long hours to pay for a deposit on a house. We worked when the tax rate was 30% and struggled those years to bring up our kids.

We worked bloody hard for our pensions which have been squandered by the political classes.

I did not have a comfortable upbringing with all the luxuries that kids now have. We lived in a house with an outdoor toilet when I was young. No central heating and hot water on tap.

With the lady in the picture, and, as another baby boomer existing on next to nothing with a pension destroyed by Brown, with Sue as well. God save us from the entitlement by compulsion generation.

My first Saturday job was working for Wm Low (a small supermarket) and doing the dirty work such as sweeping floors, putting down sawdust, cleaning slicing machines (hated that as I was terrified I'd chop off a finger). Like you Sue I worked and never claimed a penny.

But it made me what I am today and along with other areas of my life then, set my values.

Well said Elby. Brown has a lot to answer for here too.

Save us from the self righteous.

Is it not possible that many, if not all the protesters, are protesting for the right to work; and from that work to earn a wage and pensions that give them a right to life beyond that of mere existence?

The protests are against the exploitation of the many by the few who, self interest apart, couldn't give a damn as long as their portfolios can keep them in bling.

Let the present model of capitalism continue and that 'lady' will see her husband working for 351 days for perhaps half the money he's earning now.

Her attitude is the martyrdom of the idiot.

I disagree Crinkly. As far as I can discover, many of the protestors are quite comfortably off with parents funding their exploits. None appear to be suffering financially and most seem to be equipped with the latest technology.

Of course if they were in work they wouldn't be able to attend such protests on a 24x7 basis.

Will this make a difference to the exploiters? No.

What is needed is for people like this woman to take to the streets. The people who work to fill the coffers of the super-rich.

The lady in the photo has got a good point.

I agree Gedguy. The main point is should pay but it doesn't these days.

The lady is very misguided as are others it appears as these protesters have my full backing.

Several governments have tried to democratise the City of London but all, threatened by its financial might, have failed. As Clement Attlee lamented, “over and over again we have seen that there is in this country another power than that which has its seat at Westminster.”(16) The City has exploited this remarkable position to establish itself as a kind of offshore state, a secrecy jurisdiction which controls the network of tax havens housed in the UK’s Crown dependencies and overseas territories. This autonomous state within our borders is in a position to launder the ill-gotten cash of oligarchs, kleptocrats, gangsters and drug barons. As the French investigating magistrate Eva Joly remarked, it “has never transmitted even the smallest piece of usable evidence to a foreign magistrate”(17). It deprives the United Kingdom and many other nations of their rightful tax receipts.

How any of the "protesters" fund their chosen lifestyle; how many receive Benefits [paid for by the (working) Taxpayers of this country.]?

Now I know why Rome burned while Caesar fiddled - the citizens were hypnotised by the sound and ignored the heat.

The protesters are not having a go at oil rig workers, so what is she talking about?

Oil rig workes earn their money. They do a difficult, dangerous, & mainly unpleasant job. Why would anyone protest against them? It is the fat cats, the banksters, the spivs & the speculators, the criminals, the tax avoiders, the selfish & the greedy megarich who are lining their own pockets at the expense of everyone else that the protests are about.

Warren E Buffet put it best, when he said that it was his class, the rich class, who were waging class warfare & winning it. We are subsidising them to do that.

Good on the protestors. They at least have woken up.

I have no objection to the protesters CH, it's just that I don't understand what they're protesting about.

If it's the City of London then I understand but if it's the wealth creators then I don't.

What is the solution then Crinkly?

I think people should be rewarded adequately for their work and those who take the greatest risks should receive a higher percentage. Is that wrong?

For me her point is that those who are protesting on the 'green' ticket maybe aren't aware what oil provides Observer.

Of course that isn't wrong in the egalitarian sense SR.

After all's said and done not everybody who may have the wit would choose to be a neurosurgeon and not every entrepreneur wants to be an oligarch just as everybody who chooses to be a fisherman or farm hand is not a fool.

The one thing nobody -at least very few want - is to be a slave to any authority or its systems.

That's why most of these people are protesting - and should be appreciated for their efforts. After all under the present regimes protesting is a hazardous occupation.

The financial shamans are set on dismantling democracy and with their allies of spineless politicos they're close to winning.

Finally anything to do with the Tea Party is usually idiotic.

I must admit Crinkly, I've been unable to glean their reasons for protesting. So many seem to be 'professional' protestors but I accept your insider knowledge.