Germany's Greens Have Fingers To Match 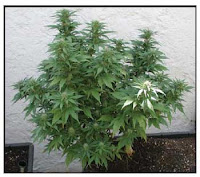 In Germany the Green Party became the senior partner in Baden-Wurttemberg in March for the first time and made major gains in the Rhineland-Palatinate vote. They've been celebrating their historic victory and seem to be continuing in the eastern state of Thuringia.

It could also be said at the Greens' office in Gera they're making a hash of their new-found popularity because cannabis plants were discovered in window boxes at the district party office.  Twelve plants were found in all and nobody has owned up to nurturing them.  Astrid Rothe-Beinlich, a state parliamentarian and leading Greens figure in Thuringia, denied any knowledge of their existence.

The plants were discovered just days before another embarrassing incident for the Greens.  The party's campaign manager for September's state election in Berlin was sacked after he was arrested on suspicion of drunk driving and assaulting a police officer.  The ex-employee, Andre Stephan, 31, was allegedly found under the influence of alcohol in has car around 4am in Wednesday and tried to run before resisting arrest, during which he reportedly injured an officer.

The police are investigating both incidents.

Often I've wondered what planet the Greens are on when they announce policies which will adversely affect the living standards of so many of the population. They should be congratulated for their inventiveness though because at least they ensured their hash was produced in an environmentally friendly process by growing it as greenery to compliment the sunflowers in the window boxes.

Could a disgruntled employee have informed the police?  Your guess is as good as mine.
Tweet
Posted by subrosa at 09:21

Such wonderful people to deal with, the Greens.

I wonder who grassed them up?

Well James, they were being environmentally friendly.

Well done John! I knew you would surpass any of my efforts. :)

Any dope voting for these charlies must be needing a smack.
It sums up the greens though. They want us to go around on our bicycles selling homegrown radishes while they live it large at our expense. Travelling the world visiting exotic locations to talk about the weather.
It reminds me of our own greenie Mr Harvie and his 14,000 mile 'holiday of a lifetime' to the USA to study the weather. Carbon bootprint of a large family for 6 months or something.
This monstrosity is getting some attention near you SR..

Hi RM. Yes I've been hearing about it from someone who lives in Monifieth. These community things are a con. There's one not far from here and they're beginning to realise money isn't everything.

Have you seen the power grab they are threatening?

Microdave, your link has been added to this week's TYP. It's too important not to have a wider audience. Many thanks.

"Often I've wondered what planet the Greens are on when they announce policies which will adversely affect the living standards of so many of the population."

No need to worry - the planet they are on is called Eugenics - their certainty is that the population needs to be reduced. Funny how they never volunteer to go first ....

It's scary the power they have Alan, but little we can do about it.