A Letter To Alex Salmond 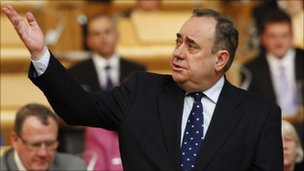 Last Saturday I praised your announcement that children of fallen military personnel will receive extra financial support to help with their education.

As we have more Scots joining the British armed forces per head than from any other part of the United Kingdom, I thought your policy was an exceptionally worthy gesture from the Scottish government.

But then the doubts crept in.  On 8 April this year the MoD proclaimed a policy (The Education Scholarship Scheme) of undertaking to provide university and further education scholarships for children of service personnel who have been killed on active duty since 1990.

Surely, I thought, you couldn't be reiterating the MoD's new policy, but in order to put my mind at rest early last week I emailed the Scottish Parliament asking if the bursaries you announced prior to Armed Forces Day were in addition to the UK government's announced in April.  As yet I have received no response; not even an acknowledgement.

For 13 years the Labour government in Westminster regurgitated their policies with regularity. Blair and Brown were masters of this devious art.

Mr Salmond, don't behave like Labour. In May people here in Scotland decided your party were the best to lead us forward. That's because you were not the Labour party. Rehashing policies, be they from Westminster or Holyrood, is not smart politics.  As one of Britain's canniest politicians you should know that.

And to all those SNP folk from Holyrood, I can only but echo what has been said, and urge you not to fall into the trap of re-hashing / re-branding/ re-spinning Westmonster policies in order to curry favour.

It does not become the SNP, is totally disingenuous, and any canny Scot can see through such a ploy.

Rosie,
A splendid letter. I hope that Mr Salmond will read it and modify his 24/7 SNP electioneering to acknowledge his opponents' contributions, however small. I'm sure he will because, putting this presentational glitch aside, he comes across to me as a very capable and fair-minded chap with his constituents' interests to the fore. I can see why so many Scots like him.
Thank you.

Thank you John. Mr Salmond's announcement last week had military families praise him until they discovered it was re-spin as you say. Not good. He can ill afford to lose the votes of those connected with the military.

It's possible someone will pass it on Brian. As you say he's a capable politician and doesn't have to stoop to the level of Blair and Brown.

I thank you for jogging my memory because I took it that it was extra to the UK's scholarships. Several other people were also in touch saying they'd done the same.

The SNP can't afford to use the military in this manner if they want to keep their votes. Rehashing this policy in particular was quite unpalatable.

The one hope for Scotland is straight talk and actions - that's the most effective weapon in the SNPs armoury.

If your suspicions are well founded then politics in Scotland should be preceded by the same health and well-being warning -{Governments Can And Will Ruin Your Life} - that, for the present and the immediate past can legitimately be applied to Westminster.

This type of vacuous political spin is exactly what those of us who aspire towards Scotland's independence do not want. Either as a tactic for getting there or as a model of governance once independence is established.

The thing to remember, Subrosa, is that the tactics worked for an awfully long time for Bliar and Brown.

It is regrettable if SWalmond has decided to lie, because that is what it is. As an Englishman I rate Salmond. As a politician I think he runs rings around Cameron and co.

But, from my Welsh home, I do detect a rather smug attitude since his election success.

It is, though, a pity my lads have finished their university days as I would have loved to challenge the Scottish decision to make English and Welsh students pay for their university courses in Scotland and not Scots and EU students.

We, too, sadly are part of the EUSSR and I believe a challenge would prove successful in the European Courts.

The road ahead could prove very bumpy indeed for Mr Salmond.

strapworld -unfortunately your challenge would only apply were Scotland an independent member of the stupid EU.

Where as, were it to opt for independence from both Westminster and Brussels, it could charge what it wants for University fees.

Were that happen, I would hope it wouldn't simply follow the market as it has but chose to minimise cost for all visiting students while maximising worth.

By giving real value the profits will follow both nationally and internationally.

It is indeed Crinkly. I think my suspicions are correct but I have emailed the SG once again for clarification. Let's see if I receive a response this time.

He doesn't need to behave like this at all. The SNP have enough policies of their own to talk about and have no need to repeat those of Westminster. If they do then they should make it abundantly clear.

They did strapworld but then people woke up.

The university fee business is causing lots of problems for Scottish universities I think. I know of three youngsters whose families have said they're not to study here because of it as they regard it unfair.