The Kirking And A New Presiding Officer 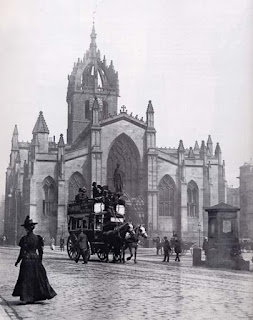 The Kirking of the Scottish Parliament took place earlier this evening with newly elected MSPs gathering for the first time.  The multi-faith religious service, with the sermon delivered by the Most Reverend Mario Conti, Archbishop of Glasgow, marked the start of the new parliament took place in St Giles Cathedral, Edinburgh (pictured) and was attended by the Earl of Wessex.

The Kirking of the Parliament dates back to before the 1707 Act of Union.  It was an occasion which blended the influence of church and politics - an influence which continues to this day, although not to the same degree.

After this event the Scottish Parliament is required to elect a new presiding officer.
Names in the hat include two SNP MSPs, Tricia Marwick and Christine Grahame.

Tomorrow the new MSPs will take the oath and as well as a new PO, two deputy presiding officers will be elected.

Tricia Marwick is a popular and down to earth MSP but she represents an area which has been, until very recently, dominated by Labour and the LibDems.  I wish her well but my concern is that her withdrawal from activity in Fife could harm her standing.
Tweet
Posted by subrosa at 20:09

A valid concern Subrosa. I was disappointed to see Grahame going for it since she has fought so valiantly to get to the truth about Lockerbie. As PO she would need to give that up. At 66 this may be her last term at Holyrood. I'd have thought she'd have used to time to push even harder for the truth during that time.

The SNP took Fife but they have a lot of work to do to make sure they keep it. I'd have thought Marwick wouldn't want anything else stopping her from being at the centre of that aim.

I think perhaps you're right Jo. Have you noticed a slight head tremor on occasions? I wonder if she knows she'll never uncover anything.