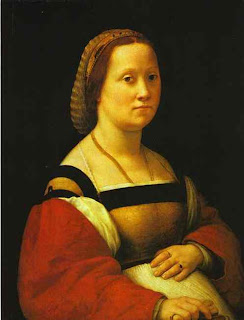 Portrait of a Pregnant Woman
Raphael c1506
Obese women are likely to have larger babies and rates of caesarians are much higher as are births with forceps and other very serious complications.  Some years ago I worked with a young woman who was obese yet her desire for children transformed her, over a year, into a bonny woman half her original size, with a more contented outlook and a confidence which hadn't been visible previously.

Unfortunately her efforts to conceive were non-productive and her husband and herself saved hard to pay for IVF treatment (it wasn't available on the NHS then).  During her second IVF attempt they emigrated to Canada and we lost touch but I've often wondered if they had a family.

However, society has changed and now obese pregnant women are to be given drugs to stop their babies becoming overweight.

More than 500 pregnant women go to the Liverpool Women's Hospital every year with a body mass index (BMI) of more than 40, meaning they are severely obese and now 100 of them are to be given the drug Metformin, which is usually given to diabetics to reduce blood sugar levels.

The medic involved in running the trial said, "The difficulty comes when you have been living in a particularly way for years that is not healthy.  To suddenly change to a different lifestyle is not easy to do.  Lifestyle change takes time and we would always encourage this as well but the use of Metformin gives us another option when the other is not realistic."

Metformin is a strong drug which may ensure a smaller baby and therefore less risk during delivery, but what effect will it have on the newborn is not known.  I expect this is the reason for the trial but isn't it sad that, in these well-informed times, there are so many grossly overweight women happy to become pregnant in the full knowledge of the risks to their unborn child's health.

Is pill-popping the answer?  I don't think so.

I wouldn't mind betting that that statement relates only to a proportion of those attending the clinic.

You may well be right Joe. It's a sad business in today's society.

"Is pill-popping the answer?"

No, unequivocally no - regular exercise and a healthy diet might be though. Surely not too much to ask of a prospective mum?

No, no, no, please no. What about the bairn?

Hi SR, this is not a very smart idea they have dreamed up. A big list of side effects and no mention of what happens if you are taking other drugs as well. The effect of combination with other prescribed drugs is probably not documented, or known.
http://www.nlm.nih.gov/medlineplus/druginfo/meds/a696005.html.
Caused a sudden increase in heart rate in my case after couple of days,enough to make me stop using pronto.

Hi Apogee, yes interesting link. Thanks for including it. The baby will have this in its system of course...

The story of drugs as developed by the pharmaceutical industry and financed by bankers, runs concurrent with a great many health problems we see, many that have evolved since the 1920's. Some will link this to a global de-population program, and there is some evidence of this in the lack of serious support to third world countries with only token offers of assistance - and seldom what is really needed - clean water and basic foodstuffs. Instead, they get vaccination programs.

The result of America's US health aid programs in Russia, has caused sperm counts in men to fall dramatically. Why?

Many will blurt out this set of videos as 'quackery', and No, I haven't tried it yet. But I will not subject myself to supporting the incomes of drug companies pushing through the medical establishment 'treatments', when the effects of such cocktails of different treatments have no known recorded data because it does not exist. If it did, sensible folk would not touch them, of that I feel sure.