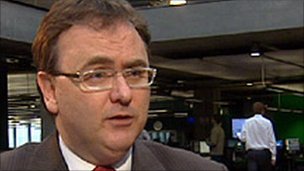 David Cairns, the Labour MP for Inverclyde, has died from acute pancreatitis in a London hospital.  He was 44 and had been hospitalised since March.

He had a rather different background to most MPs having trained and practised in the priesthood until he decided politics was his first love.

It was his role as Parliamentary Under-Secretary of State at the Scotland Office in 2005 which gained him public recognition in Scotland.  He always impressed with his calm demeanor and articulate argument even when he must have been aware the topic was nonsense.  He became the Scotland Office's face until he resigned his ministerial position in 2008 and returned to the backbenches and in the 2010 General Election he received a majority of 14,416 over his main challenger from the SNP.

Very sad news for someone this young to pass away. My thoughts are also with his family.

I think as far as Labour MPs go, Cairns was okay.

He was ok Allan and it goes to show none of us know what's round the next corner.

I always find it sad when someone dies at such a young age, perhaps this is because I come from a family where we generally live to a ripe old age.

It is sad EP and his illness seems to be more common these days or perhaps it's more readily identified.